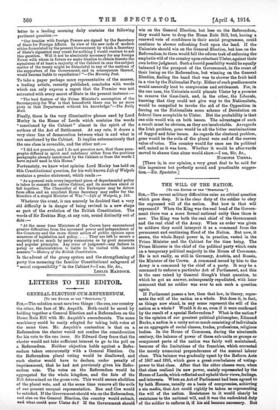 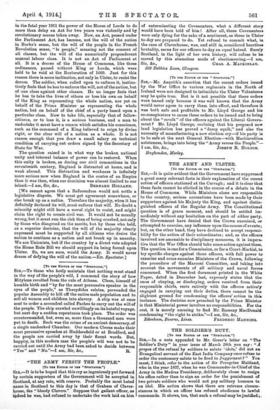 THE WILL OF THE NATION.

[TO TUE Enaoa Or Tem "Sracrrm."3 SIR,—The recent military difficulties raise an ethical question which goes deep. It is the clear duty of the soldier to obey the expressed will of the nation. But how is that will expressed? When the King was the real bead of the Govern- ment there was a more formal national unity than there is now. The King was both the real chief of the Government and the real chief of the Army. When an order was given to soldiers they could interpret it as a command from the permanent and continuing Head of the Nation. But now, it seems, the whole Royal power is, in practice, vested in the Prime Minister and the Cabinet for the time being. The Prime Minister is the chief of the political party which rests on a temporary political majority in the House of Commons. He is not really, as still in Germany, Anatria, and Russia, the Minister of the Crown. A command issued by him to the Army is a command by the chief of a party. It may be a command to enforce a particular Act of Parliament, and this is the case raised by General Gough's blunt question, to which he got an answer, subsequently repudiated, with later comment that no soldier was ever to ask such a question again.

If Parliament passes a law, then that law, in theory, repre- sents the will of the nation as a whole. But does it, in fact, as things now stand, in any sense represent the will of the nation as a whole P Would it do so, even if it were confirmed by the result of a special Referendum P What is the nation ? In the opinion of our greatest political philosopher, Edmund Burke, a nation is a unity not so mnoh consisting of individuals as an aggregate of social classes, trades, professions, religious bodies. In the House of Commons, during the nineteenth century, the balance of power of these sub-units or groups or component parts of the nation was fairly well maintained, because of the limitations of the franchise, which corrected the merely numerical preponderance of the manual labour class. This balance was gradually upset by the Reform Acts of 1867 and 1885, which gave a great overbalance of voting- power to that class. After that the other classes were, when that class realized its new power, mainly represented by the House of Lords, which reflected and upheld their views, feelings, and interests. When an Act of Parliament bad been agreed to by both Houses, usually on a basis of compromise, achieving a via media, that Act could rightly be taken as representing the will of the nation. Resistance to it would clearly be resistance to the national will, and it was the undoubted duty of the soldier to enforce it, if hia aid became necessary. But

in the fatal year 1911 the power of the House of Lords to do more than delay an Act for two years was violently and by revolutionary means taken away. Now, an Act, passed under the Parliament Act, has become, not the will of the nation in Burke's sense, but the will of the people in the French Revolution sense, "le peuple," meaning not the consent of all classes, but the will of the numerically preponderant manual labour class. It is not an Act of Parliament at all. It is a decree of the House of Commons, like those ordinances, passed without King or Lords, which were held to be void at the Restoration of 1660. Just for this reason there is more inclination, not only in Ulster, to resist the decree. The soldier, when called upon to enforce it, instinc- tively feels that he has to enforce the will, not of the nation, but of one class against other classes. He no longer feels that he has to take the lives of others or lose his own on behalf of the King as representing the whole nation, nor yet on behalf of the Prime Minister as representing the whole nation, but on behalf of the chief of a party based upon a particular class. Now to take life, especially that of fellow- citizens, or to lose it, is a serious business, and a man to undertake it must have a reason which satisfies his conscience, such as the command of a King believed to reign by divine right, or the clear will of a nation as a whole. It is not reason enough that you draw a small salary on technical condition of carrying out orders signed by the Secretary of State for War.

The question raised is in what way the broken national unity and internal balance of power can be restored. When this unity is broken, as during our civil commotion in the seventeenth century, England is distracted at home, and is weak abroad. This distraction and weakness is infinitely more serious now when England is the centre of an Empire than it was then, when our dominion was almost limited to our

[We cannot agree that a Referendum would not settle a legislative dispute. We must get agreement somewhere, or else break up as a nation. Therefore the majority, when it has definitely declared its will, must enforce that will. No doubt a minority might still have a moral right to resist, and might claim the right to create civil war. It would not be morally wrong, but it must run the risk then of being crashed, not only by those who disagreed on the merits, but by those who held, as a superior doctrine, that the will of the majority clearly expressed must be supported by all citizens who desire the nation to continue as a nation and not break up in anarchy. We are Unionists, but if the country by a direct vote adopted the Home Rule Bill we should support its being forced upon Ulster. So, we are sure, would the Army. It would never dream of defying the will of the nation.—En. Spectator.]