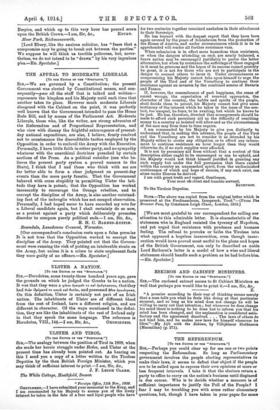 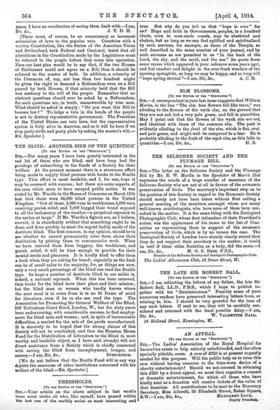 SIR,—Perhaps you could clear up for me one or two points respecting the Referendum. So long as Parliamentary government involves the people electing representatives to make their laws, it seems to defeat that object if the people are to be called upon to express their own opinions at more or less frequent intervals. I take it that the electors return a party to office to carry on the nation's business until displaced in due course. Who is to decide whether a measure is of sufficient importance to justify the Poll of the People? I fear I may be troubling you with some rather elementary questions, but, though I have taken in your paper for some

years, I have no recollection of seeing them dealt with.--I am, [There must, of course, be no unnecessary or incessant submission of laws to the popular veto. Countries with a written Constitution, like the States of the American Union and Switzerland, both Federal and Cantonal, insist that all alterations in the Constitution made by the Legislature must be referred to the people before they come into operation. Here our best plan would be to say that, if the two Houses of Parliament could not agree on a Bill, then it should be referred to the master of both. In addition, a minority of the Commons of, say, not less than two hundred might be given the right to demand a Referendum even on a Bill passed by both Houses, if that minority held that the Bill was contrary to the will of the people. Remember that no abstract questions should ever be asked by a Referendum, for such questions are, in truth, unanswerable by wise men. What should be melted is simply : "Do you want this Bill to become law ? " To lodge a veto in the hands of the people is not to destroy representative government. The President of the United States can veto laws, but the representative system is fully alive in America, and so it will be here if we stop party strife and party plots by asking the master's wilL — ED. Spectator.]