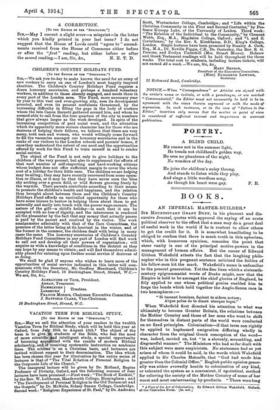 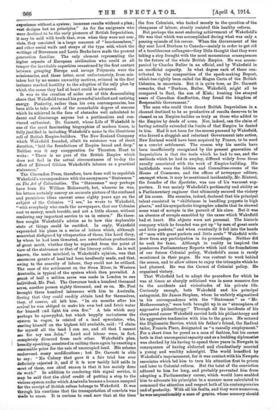 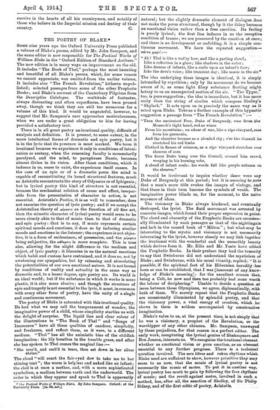 • MOUNTSTUART GRANT DUFF, in his pleasant and dis- cursive Journal, quotes with approval the saying of an acute political observer to the effect that a man may do a great deal of useful work in the world if he is content to allow others to get the credit for it. It is somewhat humiliating to be obliged to confess that there is much truth in this aphorism, which, with humorous cynicism, concedes the point that sheer vanity is one of the principal motive-powers in the management of human affairs. But the career of Edward Gibbon Wakefield attests the fact that the laughing philo- sopher who in this pregnant sentence satirized the foibles of his fellow-men hit the mark. Wakefield's name is unfamiliar to the present generation. Yet the fine lines which a sixteenth- century epigrammatist wrote of Drake might, now that the Empire is held to be amongst the chief glories of England, be fitly applied to one whose political genius enabled him to forge the bonds which hold together the Anglo-Saxon race in two hemispheres :— 0 Si taceant homines, facient to eiders notum; Atque poles de to disoet nterque loqui."

When Wakefield first directed his attention to what was ultimately to become Greater Britain, the relations between the Mother Country and those of her sons who went to shift for themselves in distant parts of the world were conducted on no fixed principles. Colonization—if that term can rightly be applied to haphazard emigration differing wholly in character from the original Greek conception of the word— was, indeed, carried on, but "in a slovenly, scrambling, and disgraceful manner." The Ministers who had so far dealt with this subject were more empiricists. No statesman had as yet arisen of whom it could be said, in the words which Wakefield applied to Sir Charles Metcalfe, that "God had made him greater than the Colonial Office." English public opinion gener- ally was either avowedly hostile to colonization of any kind, or tolerated the system as a convenient, if egotistical, method for relieving the society of the Mother Country of some of her worst and most embarrassing by-products. "There were long • dlrisno of the Art of Colonisation. By Edward Gibbon Wakefield. Oxford;

experience without a system; immense results without a plan; vast designs but no principles." As for the emigrants who were destined to be the early pioneers of British Imperialism, it may be said with truth that, even when they were not con-, elate, they consisted in a large measure of " beachcombers," and other social waifs and strays of the type with which the writings of Stevenson and Louis Becke have made the present generation familiar. The only clement representing the bigber aspects of European civilization who could at all temper the inevitable asperities occasioned by the first contact between grasping native and savage Polynesia were the missionaries, and these latter, most unfortunately, from mis- taken but by no means unworthy motives, evinced in the first instance marked hostility to the adoption of the only plan by which the cause they bad at heart could be advanced.

It was to the creation of order out of this demoralizing chaos that Wakefield turned his powerful intellect and untiring energy. Posterity, rather than his own contemporaries, has been able to take stock of the remarkable degree of success which he achieved in the face of obstacles well calculated to daunt and discourage anyone bat a pertinacious and con- vinced enthusiast. Dr. Garnett, whose Life of Wakefield is one of the most fascinating biographies of modern times, is fully justified in including Wakefield's name in the illustrious roll of British Empire-builders. The New Zealand Company which Wakefield founded, albeit its existence was of short duration, "laid the foundations of Empire broad and deep." Neither was it any exaggeration for Thornton Hunt to write: " There is no part of the British Empire which does not feel in the actual circumstances of to-day the effect of Edward Gibbon Wakefield's labours as a practical statesman."

The Clarendon Press, therefore, have done well to republish Wakefield's correspondence with the anonymous " Statesman " on The Art of Colonisation. The "Statesman" may perhaps have been Sir William Molesworth, but, whoever he was, his letters certainly convey an accurate picture of the confused and pernicious ideas current some eighty years ago on the subject of the Colonies. "I see," he wrote to Wakefield, "with everybody who reads the newspapers, that our Colonies cost us money, much trouble, and not a little shame, without rendering any important service to us in return." He there- fore sought Wakefield's advice as to how this deplorable state of things could be rectified. In reply, Wakefield expounded his plans in a series of letters which, although somewhat disfigured by vituperation of those, like Lord Grey, By whom he had been thwarted, are nevertheless productions of great merit, whether they be regarded from the point of view of the statesman or that of the literary critic. As is well known, the main mischief, in Wakefield's opinion, was that enormous grants of land had been heedlessly made, and that, owing to the scarcity of labour, they could not be utilized. The ease of the settlement on the Swan River, in Western Amstralia, is typical of the system which then prevailed. A grant of half a million acres was made in London to one individual, Mr. Peel. The Governor took a hundred thousand steres, another person eighty thousand, and so on. Mr. Peel brought three hundred labourers with him to Australia. Seeing that they could readily obtain land for themselves, they, of course, all left him. "In six months after his arrival he was obliged to make his own bed and fetch water for himself cnd• light his own fire." A tale which may perhaps be apocryphal, but which happily caricatures the system in vogue, is related of a land speculator, who, seating himself on the highest bill available, said : "I claim for myself all the land I can see, and all that I cannot see for my eon john." Land and labour were, in fact, completely divorced from each other. Wakefield's plan, batedly speaking, consisted in uniting them again by exaoting a stesmonable price for the sale of unoccupied land; His scheme Underwent many modifications ; but Dr. Garnett is able to say: "No Colony that gave it a fair trial has ever definitely rejected it, and if it is now tacitly laid aside in roost ofthem, one chief reason is that it has mainly done its ivotic." In addition to rendering this signal service, it may be said that the chief credit of putting a stop to the vicious system ander which Anetralia became a human cesspool for the receipt of British refuse belongs to Wakefield. It was through his exertions that the transportation of convicts was made to cease. It is curious to read now that at the time

the free Colonists, who looked merely to the question of the cheapness of labour, stoutly resisted this healthy reform.

But perhaps the most enduring achievement of Wakefield's life was that which was accomplished during what was only a passing episode of his career. When the Government of the day sent Lord Durham to Canada—mainly in order to get rid of a troublesome colleague—they little thought that they were taking a step fraught with the most momentous consequences to the future of the whole British Empire. He was accom- panied by Charles Buller in an official, and by Wakefield in an unofficial capacity. In what degree each of these con- tributed to the composition of the epoch-making Report, which has rightly been called the Magna Carta of the British Colonies, is uncertain. Bat it is quite tree, as Dr. Garnett remarks, that "Durham, Buller, Wakefield, might all be compared to Saul, the son of Kish ; bunting the strayed asses of Canadian disaffection, they found the kingdom of Responsible Government."

The man who could thus direct British Imperialism in a channel destined to be so productive of results deserves to be classed as an Empire-builder as truly as those who added to the Empire by deeds of arms. Nor, indeed, can the claim of having actually extended the limits of that Empire be denied to him. Had it not been for the coarse pursued by Wakefield, who forced a sluggish and reluctant Government into action, New Zealand would have been acquired by France, to be used as- a convict settlement The reason why his merits have been insufficiently recognized by the present generation of Imperialists is that the tools which he had to use, and the methods which he had to employ, differed widely from those usually associated with the work of Empire-building. His battlefields were the lobbies and Committee-rooms of the House of Commons, and the offices of newspaper editors, amongst whom, it may be mentioned incidentally, Mr. Rintoul, the founder of the Spectator, was one of his warmest sup- porters. It was mainly Wakefield's pertinacity and ability as a Parliamentary engineer that ultimately secured the victory of his cause. His enemies, indeed, declared that his principal talent consisted in " skilfulness in handling puppets in high places," and his sympathetic biographer admits that he showed some want of scruple in the pursuit of his aims. But it was an absence of scruple ennobled by the cause which Wakefield had at heart. His objects were not personal. The historic company which be founded was got up " by men of great souls and little pockets," and when eventually it fell into the hands of " men with great pockets and little souls " Wakefield with- drew from any participation in its proceedings. Neither did he seek for fame. Although in reality be inspired the ponderous Parliamentary. Reports which laid the foundations of our future Colonial policy, Wakefield's name is rarely mentioned in their pages. He was content to work behind the scenes, and to allow others to enjoy the triumphs which-be had planned. He was the Carnot of Colonial policy. He organized victory.

That Wakefield had to adopt the procedure for which he was at times so sharply criticized was in some measure due to the accidents and vicissitudes of his private life. Curiously enough, both Wakefield and his principal antagonist, Sir James Stephen, whom he unfairly stigmatised in his correspondence with the " Statesman " as "Mr. Mothercountry," were both brought up in an "atmosphere of aggressive philanthropy." Through all the incidents of his chequered career Wakefield carried both his philanthropy and his aggressive tendencies with him to the grave. He entered the Diplomatic Service, which his father's friend, the Radical tailor, Francis Place, designated as "a rascally employment," For a short time he posed as a man of fashion, but his career both in that uncongenial capacity and as a budding diplomatist was checked by his having to spend three years in Relegate in consequence of having abducted and clandestinely married a young and wealthy schoolgirl. The world benefited by Wakefield's imprisonment, for it was contact with his Newgate associates which led him to turn his attention-first to prison and later to Colonial reform. But the taint of the conviction adhered to him for long, and probably prevented him from adopting a Parliamentary career, which would have enabled him to advocate his principles in a manner more calculated to command the attention and respect both of his contemporaries and of posterity. With all his faults, and they were numerous; he was unquestionably a man of geains, whose memory shoat/

survive in the hearts of all his countrymen, and notably of those who believe in the Imperial mission and destiny of their