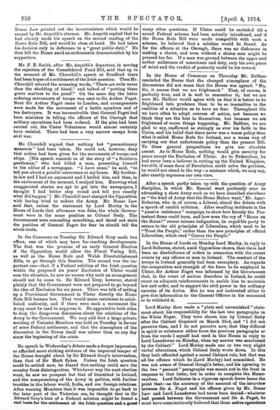 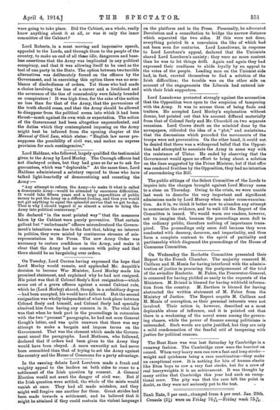 Lord Morley then made a " plain and unvarnished "

state- ment about his responsibility for the last two paragraphs in the White Paper. They were shown him by Colonel Seely after the Cabinet dispersed on March 23rd, and "I did not perceive then, and I do not perceive now, that they differed in spirit or substance either from the previous paragraphs or from the words I myself had used in this House in reply to Lord. Lansdowne on Monday, when my answer was sanctioned by the Cabinet." Lord Morley made one or two very slight verbal alterations, which Colonel Seely wrote down. In this they both offended against a sound Cabinet rule, but that was all the offence which he (Lord Morley) bad. committed. He was not aware of General Gough's letter, and his agreeing to the two " peccant" paragraphs was meant not in the least in response to that letter, but in order to complete the Memo- randum. Lord Selborne in a vigorous speech drove home the point that—as the accuracy of the account of the interview between Sir A. Paget and his officers( given by Mr. Bonar Law and Lord Lansdowne bad never been denied—whatever had passed between the Government and Sir A. Paget, he must have conscientio usly believed that these active operations were going to take place. Did the Cabinet, as a whole, really know anything about it at all, or was it only the inner committee of the Cabinet?