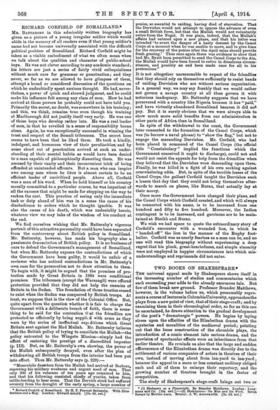 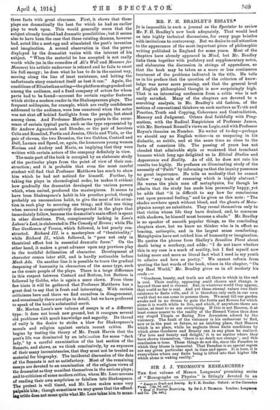 Page 20, 4 April 1914 — TWO BOOKS ON SHAKESPEARE.* THE universal appeal made by Shakespeare
Close

TWO BOOKS ON SHAKESPEARE.* THE universal appeal made by Shakespeare

shows itself in the increasing number of studies and commentaries which each succeeding year adds to the already enormous tale. But few of them break new ground. Professor Brander Matthews, however, in the volume before us, which presumably repre- sents a course of lecturesin ColumbiaIIniversity, approaches the plays from anew point of view, that of their stage-craft; and by examining them in their chronological order, eo far as this can be ascertained, he draws attention to the gradual development of the poet's "dramaturgic" powers. He begins by laying stress upon the affinities of the Elizabethan drama with the mysteries and moralities of the mediaeval period; pointing out that the loose construction of the chronicle plays, the introduction of a comic element into serious drama, and the provision of spectacular effects were an inheritance from that earlier theatre. He reminds us also that the large and sudden effioreacence of the Elizabethan drama was directly due to the settlement of various companies of actors in theatres of their own, instead of moving about from inn-yard to inn-yard • because the appeal to a more or less constant auditory obliged each and all of them to enlarge their repertory, and the growing number of theatres brought in the factor of competition.

The study of Shakespeare's stage-craft brings out two or

• (1) Shakspass as a Playttright. By Brander Matthews. London : Long. mans and Co. [15e. net. (2) Shakespeare: the Man and his Work, Seven Essays by Norton Luce. Bristol: J. W. Arrowsmith. [3s. 6d. not.] three facts with great clearness. First, it shows that those plays are dramatically the best for which he had an earlier play to work upon. This would generally mean that the subject already treated had dramatic possibilities ; but it seems also to have been the case that these existing dramas, however bad, acted like a nest-egg and stimulated the poet's invention and imagination. A second observation is that the power displayed by the dramatist varies with the interest of his subject. "When the material be has accepted is not really worth while (as in the comedies of All's Well and Measure for Measure) his artistic endeavour is relaxed and he fails to exert his fall energy; he does what he has to do in the easiest way, moving along the line of least resistance, and letting the unfortunate story construct itself as best it can." Again, the conditions of Elizabethan acting—the platform stage pushed out among the audience, and a fixed company of actors for whom parts had to be found—account for certain regular features which strike a modern reader in the Shakespearean plays. The frequent soliloquies, for example, which are really confidences addressed to the audience, were less unnatural when the actor was not shut off behind footlights from the people, but stood among them. And Professor Matthews points to the recur- rence of certain typical parts, such as the type represented by Sir Andrew Aguecheek and Slender, or the pair of heroines Celia and Rosalind, Portia and Jessica, Olivia and Viola, or the pair of clowns, the two Dromios, the two Gobbos, Costard and Dull, Launce and Speed, or, again, the humorous young women Nerissa and Audrey and Maria, as implying that they were written with certain actors of the company definitely in view.

The main part of the book is occupied by an elaborate study of the particular plays from the point of view of their con- struction; and it is probable that eren the most careful student will find that Professor Matthews has much to show him which be had not noticed for himself. Further, by taking the plays in chronological order, he makes it evident how gradually the dramatist developed the various powers which, when united, produced the masterpieces. It seems to have been Shakespeare's habit in his prentice period, though probably an unconscious habit, to give the most of his atten- tion in each play to securing one thing ; and this one thing when secured is comparatively disregarded in the plays that immediately follow, because the dramatist's main effort is spent in other directions. Plot, conspicuously lacking in Love's Labour's Lost, is elaborated in The Comedy of Errors; while The Two Gentlemen of Verona, which followed, is but poorly con- structed. .Richard III. is a masterpiece of "theatricality," while Richard II., which followed, is "poor not only in theatrical effect but in essential dramatic force." On the other hand, it makes a great advance upon any previous play in the truthful delineation of character. Development of character comes later still, and is hardly noticeable before Much Ado. On another line it is possible to trace the gradual deepening of humanity in characters of the same type, such as the comic people of the plays. There is a large difference in this respect between Costard and Bottom, bat Bottom is followed by Gobbo, who is again a mere clown. From these few hints it will be gathered that Professor Matthews has a great deal to say that is fresh and interesting. With certain criticisms here and there we find ourselves in disagreement, and occasionally there are slips in detail, but we have preferred to speak of the book's substantial merit. Mr. Morton Luce's new volume of essays is of a different type: it does not break new ground, but it reargues several old problems with much knowledge and sagacity. Its thread of unity is the desire to strike a blow for Shakespeare's morals and religion against certain recent critics. He begins by testing the theory of Mr. Frank Harris that the poet's life was dominated by an infatuation for some "dark lady," by a careful examination of the last section of the Sonnets, and shows,as we think conclusively, by an exposure of their many inconsistencies, that they must not be treated as material for biography. The incidental discussion of the date of the Sonnets is not so satisfactory. Most of the remaining essays are devoted to an examination of the religious views of the dramatist as they manifest themselves in the serious plays ; and to criticism of some modern critics, whom Mr. Luce accuses of reading their own scepticism or fatalism into Shakespeare. The protest is well timed, and Mr. Luce makes some very palpable bits; though sometimes we may guess that the offend. lug critic does not mean quite what Mr. Luce takes him to mean.