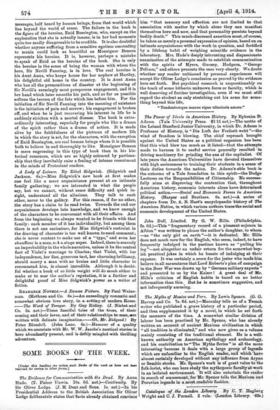 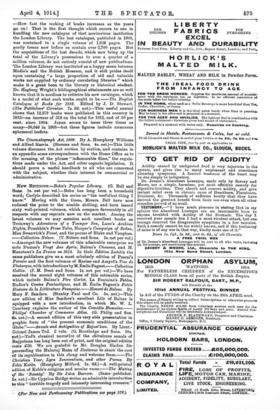 —How fast the making of books increases as the years

go oml That is the first thought whioh occurs to one in handling the new catalogue of that meritorious institution the London Library. The last catalogue, published in 1903, was contained in a single volume of 1,626 pages. The portly tomes now before us contain over 2,700 pages. But the acquisitions of the last decade, which now bring up the total of the Library's possessions to over a quarter of a million volumes, do not entirely consist of new publications. The London Library was instituted as a happy mean between Mndie's and the British Museum, and it still. prides itself upon. containing "a large proportion of old and valuable works not supplied by ordinary circulating libraries" which make it a great boon to the literary or historical student. Er. Hagberg -Wright's bibliographical attainments are so well known that it is needless to criticize his new catalogue, which is a model of what such works ought to be.—The _English Catalogue of Books for 1913.. Edited by J. D. Stewart. (The Publishers' Circular. 7s. 6d. net.)—This useful annual shows that 12,379 books were published in this country in 1913—an increase of 312 on the total for 1912, and of 50 per cent. since 1904. Japan seems to issue- three times as many-36,046 in 1908—but these figures include numerous ephemeral leaflets.