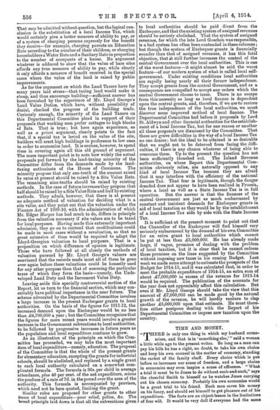 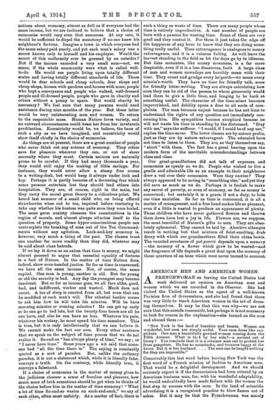 "r niTITERE is only one thing in which my husband econo. ERE and that is in 'something else,' " said a woman a little while ago to the present writer. So long as a man can pay his bills he has a right, no doubt, to take his own choice and keep his own counsel in the matter of economy, standing the racket of the family chaff. Every choice which is put before ua increases our sense of freedom, and a large choice in economies may even inspire a sense of affluence. " What a trial it must be to Jones to do without such-and-such," says the cheerful Smith to himself as he watches Jones carrying out his chosen economy. Probably his own economies would be a great trial to his friend. Each man saves his money on his fancy, and should set himself to get pleasure out of his expenditure. The facts are an object-lesson in the limitations of free will. It would be very dall if everyone had the same notions about economy, almost as dull as if everyone had the same income, but we are inclined to believe that a choice of economies would vary even that sameness. At any rate, it would be sufficient to dispel the monotony if no one knew his neighbour's fortune. Imagine a town in which everyone had the same salary paid yearly, and yet each man's salary was a secret known only to himself and his employer. Would the secret of this uniformity ever be guessed by an outsider ? Not if the income exceeded a very small sum—not, we mean, if the whole community were what is called well- to-do. He would see people living upon totally different scales and having totally different standards of life. There would be dear schools and cheap schools, dear shops and cheap shops, houses with gardens and houses with none, people who kept a conveyance and people who walked, well-dressed people and ill-dressed people, people who gave in charity and others without a penny to spare. But would charity be necessary ? We feel sure that many persons would need assistance during nine months of the year. Bnt these latter would be very uninteresting men and women. To return to the respectable mass. Human Nature loves variety, and no outward circumstances could wean her from her inveterate predilection. Eccentricity would be, we believe, the bane of such a city as we have imagined, and eccentricity would show itself chiefly in the choice of economies.

As things are at present, there are a great number of people who never think out any scheme of economy. They either save for pleasure wherever they can, or out of sheer necessity where they must. Certain natures are naturally prone to be careful If they had many thousands a year, they would still enjoy the making of little savings. For instance, they would never allow a stamp free access to a writing-desk, but would keep it always under lock and key. Perhaps it is partly because of a devouring fear which some persons entertain lest they should lead others into temptation. They are, of course, right in the main, but they carry the moral germ theory to a ridiculous point. We heard last summer of a small child who, on being offered strawberries when out to tea, inquired before venturing to take any whether his hostess was quite sure they were boiled. The same germ anxiety obsesses the conscientious in the region of morals, and almost always attaches itself to the question of property. Some hyper-conscientious people can contemplate the breaking of nine out of the Ten Command- xaents without any agitation. Lock-and-key economy is, however, very much a thing of the past. The classes trust ono another far more readily than they did, whatever may be said about class hatreds.

If we lay it down as an axiom that time is money, we might almost proceed to argue that essential equality of fortune is a fact of Nature. In the matter of time Nature does, indeed, show even-handed justice. So far as time is concerned, we have all the same income. Not, of course, the same capital. One man is young, another is old. But for young or old the security is bad. Any day the youngest may become insolvent. But so far as income goes, we all faro alike, good, bad, and indifferent, worker and wastrel. Merit does not count. A tax of sleep is exacted from all, but even that can be modified at each man's wilL The celestial banker seems to ask him how he will take his minutes. Will he have morning minutes or evening minutes ? He can get up early or he can go to bed late, but the twenty-four hours are all he can have, and also he can have no less. Whatever his pain, whatever his ecstasy, he must spend his time somehow. This is true, but it is only intellectually that we can believe it• We cannot make the fact our own. Every other sentence that we speak on the subject of time proves that we do not realize it. So-and-so "has always plenty of time," we say;. or "I never have time." Some years ago a wit said that some- one bad "all the time there is." The saying is constantly quoted as a sort of paradox. But, unlike the ordinary paradox, it is not a statement which, while it is literally false, conveys a truth. On the contrary, while literally true, it conveys a falsehood.

If a choice of economies in the matter of money gives to the judicious chooser a sense of freedom and pleasure, how much more of both sensations should he get when he thinks of the choice before him in the matter of time economy! " What a lot of time So-and-so wastes on such-and-such," we say of each other, often moat unfair/y. As a matter of fact, there is

such a thing as waste of time. There are many people .whose time is entirely unproducitiie. A. vast number of people are born with a passion for wasting time. Some of them are very good and they control it. For them it just takes the edge off the happiness of any hour to know that they are doing some- thing really useful. Time extravagance is analogous to money extravagance, and it is a ruinous failing. As well leave the harvest standing in the field as let the days go by in idleness. But time meanness, like money meanness, is a far more despicable, even if it is a less disastrous, fault A large class of men and women nowadays are horribly mean with their time. They count and grudge every ha'porth—we mean every minute's-worth. They have no time for friendly talk, none for friendly letter-writing. They are always calculating how soon they can be rid of the person to whom generosity would lead them to give a little time, and longing to be back at something useful. The character of the time-miser becomes impoverished, and debility opens a door to all sorts of com- plaints. The man becomes unjust because be has not time to understand the rights of any question not immediately con- cerning him. His sympathies become atrophied because he will not waste his time in standing by the distressed. "Stay with me," says the sufferer. "I would, if I could be of any use," replies the time-saver. The lower classes are by nature

just as they are by nature extravagant. The educated have not time to listen to them. They are, as they themselves say, "short" with them. The fact has a great bearing upon the modern form of the inevitable misunderstandings between class and class.

Our great-grandfathers did not talk of expenses and economies as openly as we do. People who wished to live a gentle and admirable life as an example to their neighbours drew a veil over their economies. Were they unwise ? They always appeared to be saving in "something else," and yet they did save as much as we do. Perhaps it is foolish to make any secret of poverty, or even of economy, so far as money is concerned; but certainly it is a grace, if not a duty, to bide our time anxieties. So far as time is concerned, it is all a matter of management, and a free hand makes life so pleasant, even if a little is wasted to produce an appearance of plenty. Those children who have never gathered flowers and thrown them down have lost a joy in life. Flowers are, we suppose, the moat beautiful of Nature's gifts to men. They are abso- lutely ephemeral. They cannot be laid by. Abortive attempts result in nothing but that mixture of faint-smelling, drab decay with which our grandmothers filled their china bowls. The vaunted sweetness of potTourri depends upon a memory —the memory of a flower which grew to bo wasted—and the fragrance of life depends a great deal upon the memory of those quarters of an hour which were never turned to account.