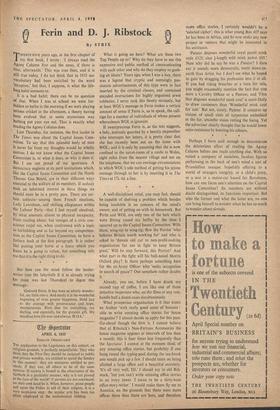 in the first chapter of my first book, I wrote: 'I always read the Agony Column first and the news, if there is time, afterwards.' This was true then, and it is still true today. I do not think that in 1933 our vocabulary had been enriched by the word escapism,' but that, I suppose, is what the life- long habit amounts to.

It is a bad habit; there can be no question of that. When I was at school we were for- bidden to bathe in the morning if we were playing serious cricket in the afternoon, a theory having been evolved that in some mysterious way bathing put your eye out. That is exactly what reading the Agony Column does.

Last Thursday, for instance, the first leader in The Times was about the Capital Issues Com- mittee. To say that this splendid body of men Is never far' from my thoughts would be wholly untrue; I do not know what the Capital Issues Committee is, or what it does, or why it does it. But I am not proud of my ignorance. A democracy neglects at its peril institutions which, like the Capital Issues Committee and the North Thames Gas Board, are in their different ways essential to the welfare of its members. If nobody took an informed interest in these things we should soon be in a pretty pass. There are cer- tain subjects—among them French elections, Lady Lewisham, and shifting allegiances within the Labour Party—that I feel myself absolved, by what amounts almost to physical incapacity, from reading about; but vestiges of a civic con- science impel me, when confronted with a topic as forbidding and as far beyond my comprehen- sion as the Capital Issues Committee, to have a forlorn bash at the first paragraph. It is rather like putting your horse at a fence which you know he is going to refuse, but something tells toe that it is the right thing to do.

But how can the mind follow the leader- writer into the labyrinth if it is already trying (as mine was last Thursday) to digest this message : `Geloved Ferin. It has been so utterly wonder- ful, my little one-y. And surely it is the wonderful beginning of even greater happiness. Hold fast to thy courage with perseverance and hope, sweetprecious. Bless thee for everything, my darling, and especially for thy greatest gift. My steadfast love for ever and always. W.O.L.' What is going on here? What are these two Top People up to? Why do they have to use this expensive and public method of communicating with each other and why do they employ so gush- ing an idiom? Years ago, when I was a boy, there was a legend that cryptic and seemingly pas- sionate advertisements of this type were in fact inserted by the criminal classes, and contained encoded instructions for highly organised jewel robberies. I never took this theory seriously, but at least WOL's message to Ferin makes a certain amount of sense if Ferin is, so to speak, the call- sign for a number of individuals of whose present whereabouts WOL is ignorant.

If sweetprecious Ferin is, as the text suggests, a lady, jealously guarded by a beastly stepmother who intercepts her letters, it is pretty clear that she has recently been out on the loose with WOL; and it is only by assuming that she is now confined in the turret-room of a castle in Wales, eight miles from the nearest village and not on the telephone, that we can envisage circumstances in which WOL's sole method of getting his jejune message through to her is by inserting it in The Times at 17s. 6d. a line.

A well-disciplined mind, you may feel, should be capable of shelving a problem which besides being insoluble is no concern of the mind's owner, and of getting on with its homework. But Perin and WOL are only two of the bats which were flitting round my belfry by the time I squared up to the Capital Issues Committee. With them, wing-tip to wing-tip, flew the Patriot 'who believes Britain worth working for' and who is asked to 'donate old car to non-profit-making organisation for use in fight to keep Britain great.' Will he step forward, this Patriot? And what part in the fight will his bull-nosed Morris Oxford play? Is there perhaps something here for the ex-Army Officer who 'seeks occupation in search of peace'? One somehow rather doubts it.

Already, you see, before I have drunk my second cup of coffee, I am like one of those detective inspectors who, on the films at any rate, handle half a dozen cases simultaneously.

What prosperous organisation is it that wants an Author 'with really good sense of humour : able to write amusing office stories for house magazine'?. I almost decide to apply for this post. Go-ahead though the firm is, I cannot believe that at Ribstock's Non-Ferrous Accessories the house magazine appears at intervals of less than a month; this is four times less frequently than the Spectator. I cannot at the moment think of any amusing office stories, but probably if one hung round the typing-pool during the tea-break one would pick up a few. I should insist on being allotted a large office and a beautiful secretary. 'It's all very well, DJ,' I should say to old Rib- stock, 'but you can't write amusing office stories in an ivory tower. I mean to be a dirty-boot office-story-writer.' I would make them fly me to America, on the grounds that there were more offices there than there are here, and therefore more office stories. I certainly wouldn't be a 'salaried cipher'; this is what young Box 417 says he has been in Africa, and he now seeks any new project or venture that might be interested in his assistance.

'Painter disposes wonderful royal pastel mink stole £125, also i-length wild mink jacket £95.' Now why did he say he was a Painter? I dare say it sounds more democratic, more down-to- earth than Artist, but I don't see what he hoped to gain by dragging his profession into it at all. If you had riding breeches or a tiara for sale, you might reasonably mention the fact that you were a Cavalry Officer or a Peeress; and 'Film Star disposes wonderful mink coat' is more likely to draw customers than 'Wonderful mink coat for sale.' But not, surely, Painter. It conjures up visions of small clots of turpentine embedded in the fur, absinthe stains rotting the lining. Yet the advertiser clearly thought that he would lower sales-resistance by hoisting his colours.

* * * Perhaps I have said enough to demonstrate the deleterious effect of reading the Agony Column before one reads anything else. With so varied a company of nameless, faceless figures performing in the back of one's mind a sort of Pirandellian masque, hopefully offering to a world of strangers integrity, or a child's pony, or .a seat in a motor-car bound for Barcelona, how can one focus one's attention on the Capital Issues Committee? Its members are without doubt distinguished, its functions important. But who the former and what the latter are, no one can bring himself to wonder when he has so much to wonder about already.