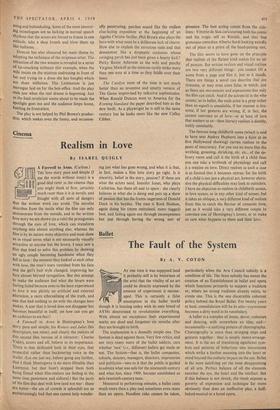 A Farewell to Arms. (Carlton.) 64 liko use the words without irony) is a ff I THE love story pure and simple (1 good deal rarer in the cinema than you might think at first; certainly , j much rarer than it is in novels, and fraught with all sorts of dangers that the written word can avoid. The novelist describes from the inside what the film can only demonstrate from the outside, and in the written love story we are shown (as a rule) the protagonists through the eyes of love, which can transform anything into almost anything else; whereas the film is by its nature more objective and must show Us in visual terms what is not necessarily visually attractive to anyone but the lovers. I once saw a film that tried to solve this problem by showing an ugly couple becoming handsome when they fell in love : the moment they looked at each other with love, the man's scars vanished from his face and the girl's hair style changed, improving her face almost beyond recognition. But this attempt to make the audience feel what the lovers were feeling failed because even to the least experienced in love it was plainly an artificial and external alteration, a mere etherealising of the truth, and one that had nothing to do with the changes love makes. A scar that is loved does not disappear but becomes beautiful in itself; yet how can you get an audience to see that?

A Farewell to Arms is Hemingway's love story pure and simple, his Romeo and Juliet (his description, not mine); and clearly the makers of this second film version of it (director : Charles Vidor), actors and all,. believe in its importance. There is that dedicated look in their eyes, that respectful rather than huckstering voice in the trailer. (Let me just say, before going any farther, that I think Hemingway is no more filmable than Lawrence, but that hasn't stopped them both being filmed when film-makers are feeling at the same time passionate and cultural.) But the parts of the film that deal with love (and not war : those are better—the use of crowds is splendid) are so embarrassingly bad that one cannot help wonder- ing just what has gone wrong, and what it is that, in fact, makes a film love story go right. Is it sincerity, belief in the story, passion? If these are what the actors need, Jennifer Jones, who plays Catherine, has them all and to spare : she clearly believes in what she is doing and puts up a show of passion that has the frantic eagerness of Donald Duck in his heyday. The man is Rock Hudson, again doing his (more restrained, more rugged) best, and failing again not through incompetence but just through having the wrong sort of presence. The best acting comes from the side- lines : Vittorio de Sica caricaturing both his comic and his tragic self as Rinaldi, and that fine grotesque comedian Alberta Sordi looking weirdly out of place as a priest of the head-patting sort.

The film seems to have gone on the principle that realism of the flattest kind makes for an air of passion. But written realism and visual realism are two very different things : you cannot lift a scene from a page and film it, just as it stands. There are things a novel can describe that are tiresome, or may even seem false, to watch; just as there are movements and expressions that only the film can catch. And if the actress (it is she who counts; as in ballet, the male actor is a prop rather than an equal) is unsuitable, if her manner is tire- some, if her gestures are wrong, if, in fact, she cannot convince us of love—or at least of love that matters to us—then literary realism is doubly, trebly unsuitable.

The famous long childbirth scene (which is said to have sent Audrey Hepburn into a faint at its first Hollywood showing) carries realism to the point of inaccuracy. For you can no more film the writhing, groaning, shrieking, etc. etc., of the de- livery room and call it the birth of a child than you can take a textbook of physiology and call it a treatise on love. Direct realism in such a case is so limited that it becomes untrue; for the birth of a child is not just a physical act, however obtru- sive the physical difficulties may look to outsiders. I have no objection to realism in childbirth scenes, in love scenes, or in any other kind of scenes; but it takes an oblique, a very different kind of realism from this to catch the flavour of romantic love, just as it would take a very different couple to convince one of Hemingway's lovers, or to make us care what happens to them and their love.