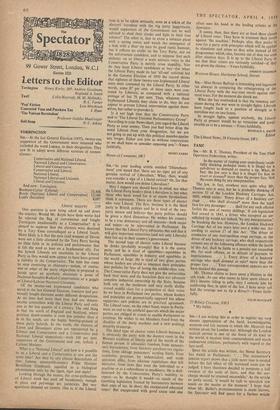 SIR,—In your leading article entitled 'Disenchant- ment' you stated that

'there arc no signs yet of any genuine revival of Liberalism.' What, then, would you consider a sign of a Liberal revival? Or, for that matter, how would you define Liberalism?

May I suggest you should have in mind, not what the Liberal Party leaders think Liberalism is, but what those who have voted for it at recent by-elections think it represents. There are three types of elector who vote Liberal. The first, because it is the third party in British politics and he is tired of the two- party seesaw and believes that party politics should be given a third dimension. He wishes- his country to be a true democracy and all interests—both major and minor—to be represented in Parliament. He knows that the Liberal Party advocates this and that it will give important minorities (and not only Liberals) their fair say in their country's government.

The second type of elector votes Liberal because he thinks (probably wrongly) that it is the centre party and he is tired of squabbles—squabbles in Parliament, squabbles in industry and squabbles in the world at large. He is tired of two giant parties whose leaders are afraid to interpret their principles into policies for fear of losing the middle-class vote. The Conservative Party dare not give the universities back their seats, and the Socialists dare not advocate complete industrial ownership by the State, because both rely on the moderate and very easily disillu- sioned middle class for a proportion of their votes. So we have in Parliament two parties, whose leaders and principles are geometrically opposed but whose supporters and policies are in practical agreement. The Liberal voter, on the other hand, wants in Parlia- ment an end to the artificial quarrels which the major parties are obliged to create to enable Parliament to continue. He wishes to see Members freed from the shackles of the party machine and a new political sincerity to emerge.

The third type of elector votes Liberal because it is obviously the party with the deepest roots in the Western tradition of liberty and of the worth of the human person. It advocates freedom from unneces- sary bureaucracy, from finickety purchase-tax regula- tions, from old-age pensioners' earning limits, from restrictive practices by industrialists and trade unionists alike, from irksome regulations that kill initiative, from laws that treat the individual as a machine or as a subordinate to machinery. He is disil- lusioned by the Conservative Party's inability to repeal—as he thought• it would—so much of the fumbling legislation framed by bureaucrats between their cups of tea. In short, the exasperated educated voter! But exasperated with good cause and one

often sees his hand in the leading articles in the Spectator.

It seems, then, that there are at least three classes of Liberal voter. They have in common their revolt against 'the machine.' Perhaps, also, they prefer to vote for a party with principles which will be applied to situations and crises as they arise instead of for programmes which, alas, become out of date too soon after election days. It is up to the Liberal Party to see that their voters are variously satisfied—if they are given the chance.—Yours faithfully, ANDREW GOODMAN