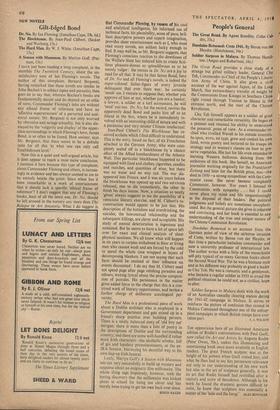 I HAVE just been reading a long complaint, in the monthly The Twentieth Century, about the un- satisfactory tone of Ian Fleming's novels. The author of this complaint, Bernard Bergonzi, having remarked that these novels are similar to John Buchin's in subject (spies and pursuits), then goes on to say that, whereas Buchan's books are fundamentally decent and do depend on an ethic of sorts, Commander Fleming's tales are without any ethical frame of reference and have an 'affective superstructure' of a perverted and anti- social nature. Mr. Bergonzi is not only worried by obtrusive and savage sexuality, but is also dis- mayed by the 'vulgarity and display' of the upper- class surroundings in which Fleming's hero, James Bond, is so often to be found. How sinister, says Mr. Bergonzi, that there seems to be a definite taste for all this 'at what one can only call Establishment level.'

Now this is a quiet and well-argued article, but it does appear to reach a most naive conclusion. I mention it here because this type of complaint, about Commander Fleming and others, is increas- ingly in evidence and has always seemed to me to be entirely beside the point. Since when has it been remarkable in a work of entertainment that it should lack a specific 'ethical frame of reference'? I don't suggest that any of Fleming's books, least of all the latest one, Dr. No, should be left around in the nursery any more than The Relapse or Ars Amatoria. What I do suggest is that Commander Fleming, by reason of his cool and analytical intelligence, his informed use of technical facts, his plausibility, sense of pace, bril- liant descriptive powers and superb imagination, proviaes sheer entertainment such as I, who must read many novels, am seldom lucky enough to find. It may well be, as Mr. Bergonzi suggests, that Fleming's conscious reaction to the dowdiness of the Welfare State has induced him to create ficti- tious pleasure-domes so splendiferous as to be merely vulgar : the menus in Dr. No are a joy to read for all that. It may be that James Bond, hero of Dr. No' and all Fleming's novels, is indeed the• super-colossal father-figure of every juvenile delinquent that ever there was : he certainly 'sends' me. I venture to suppose that, whether you approve of him or not, whether you are a banker, a lawyer, a soldier or a turf accountant, he will 'send' you too. Dr. No, for the record, revives the apparently dead Bond and packs him off to an Island in the Sun, where he is immediately in- volved with an interesting child of nature and with a paranoiac and very sinister Chinese intellectual.

Jean-Paul Clebert's The Blockhouse has re- ceived acclaim which I find difficult to understand. This is the story, based on fact, of six Frenchmen attached to the German Army, who were com- pletely sealed off in a blockhouse by a chance effect of the Allied bombardment of the Atlantic Wall. This particular blockhouse happened to be equipped with food and clothes, cigarettes, candles and matches, and quantities of wine; but there was no water and no way , out. The war dis- appeared into France, and it was six years before the blockhouse was opened up and two survivors released, one to die immediately, the other to finish his days insane. Now, a situation so neatly 'given' always suggests to me the possibility of a conscious literary exercise, and M. Cleberes re- construction would appear to be just that. His. description of the boredom and overdrinking, the suicides, the homosexual relationship and the subsequent killings, are clever and acceptable: His study of mental deterioration is ingenious and sustained. But he seems to have a lot of space left over for exact and clinical analysis of sheer physical nastiness. We all know what will happen in six years to corpses embalmed in flour or living men who cannot wash and are forced by the cold to spend the whole time wrapped in layers of decomposing blankets. I am not saying that such facts should be omitted or their influence on events discounted : I do say that M. Clebert need not spend page after page relishing parasites and odours, waxing lyrical about the precise composi- tion of pustules. His persistence in the matter gives added force to the charge that this is a con- trived work of literary opportunism, and invites a further charge of deliberate scatological per- versity.

The Hard Man is a professional piece of work about a Dublin architect who is employed in a Government department and gets mixed up in a friend's sharp practice over building permits. There is a nicely balanced story of 'old boy net' intrigue; there is more than a hint of poetry in the descriptions of Dublin and the surrounding country; and there are some well-handled if rather stock Irish characters—the alcoholic scholar, full of gin and lapidary pronouncements, or the ex- IRA Senator, blarneying his deceitful way to his own slap-up Irish funeral.

Lastly, Martyn Goff's A Season with Mammon sets out very successfully to build up mystery and suspense about an enigmatic film millionaire. The whole thing sags hopelessly, however, with the boring discovery that the millionaire was kicked about at school for being too clever and has merely been trying to get his own back ever since.