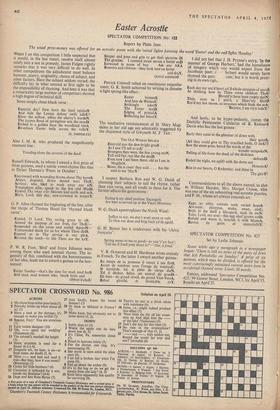 SPECTATOR COMPETITION No. 422 Report by Plain Jane The usual prize-money was offered for an acrostic poem with the initial lights forming the word 'Easter' and the end lights 'Sunday.'

WHEN I set this competition I little suspected that it would, in the last resort, resolve itself almost solely into a test in prosody. James Fidgen rightly remarks that it was very difficult to do well. In other competitions the adjudicator must balance humour, poetry, originality, choice of subject, and other factors. Here the subject seldom varied; the difficulty lay in what seemed at first sight to be the impossibility of rhyming. And here it was that a remarkably large number of competitors showed a high degree of technical skill.

Also I. M. R. who produced the magnificently resonant line : Treading alone the caverns of the dead.

Russell Edwards, to whom I award a first prize of three guineas, used a subtle vowel-rhy-me like that in Dylan Thomas's `Poem in October' : Encrowned with wounding thorns about Thy browS. Abject, despised, thrice denied wert ThoU, Saviour, who bled to wash away our siN. Triumphant now, speak in the fire and WinD, Extend Thy sway o'er Heaven and earth and seA, Ris'n, Lord, this day, new-crowned in majestY.

G. P. Allen rhymed the beginning of the line, after the recipe of Thomas Hood for 'rhymed blank verse' : Extend, 0 Lord, Thy saving grace to uS; Amend the purpose of our lives, , for ThoU- Suspended on the cross .and nailed thereoN- Transcended death for us for whom Thou dieD, Expend us in Thy service is our pleA, Re-rend the tomb—to life Thou are the keY.

P. W. R. Foot, 'Bird' and Joyce Johnson were among those who used internal rhyme. The in- genuity of this, combined with the humorousness of her idea, leads me to award a guinea to the last- named : Easter Sunday—that's the time for mad, mad hatS And mad, mad women who, 'neath brim and ribbon'd choU Simper and pose and grin to get their pictures iN The glossies. I contend straw serves a betted ea) Entwined in mane of bay. Ask any ARA Rosettes and ribbons—they look best on horse and draY.

The meditative reminiscences of St. Mary Mag- dalen in her old age are admirably suggested by the disjointed style of Gwyneth M. F. Tait :

Strangers they were, the fine young meN, Tall and fair, not like the deaD.

Even now I see them there, old as I am in MagdalA.

I suspect Barbara Roe and W. G. Daish of choosing their subjects to suit the rhyme, rather than vice versa, and all credit to them for it. The former affects the gastronome : Eating is my chief pastime, Escargots Are best as served up at the Vieux Morceau.

W. G. Daish apostrophises the North Wind Suffice to say, we don't want snow or rain To blue our dose and brig back co'ds agaid.

G. H. Baxter has a rendezvous with his `cherie francaise': Spring seems to me so good—to you 'c'est bon'; 'Tell me if fond your heart isr---.oui, a fond.'

V. R. Ormerod and H. Hardman wrote entirely in French. To the latter I award another, guinea :

En temps de sa jeunesse it venait a ,ces flotS, Avant de sombrer sous l'orage du tombeaU. Si intrdpide, lui, si plein de vierge dlaN, Tel it ddchut, hdlas, cet amiral du granD- Eh bien—du grand rdveil, du grand Vice-VersA, Rebut glorifid, et invincible roY. And lastly, to be hyper-pedantic, comes the Dactylic Pentameter Catalectic of R. Kennard Davis who has the last guinea : Early they came in the glimmer of dawn with their spiceS, (All they could give to Thy crucified body, 0 JesU!) Saw the stone gone, heard the words of the wonder outspokeN, Telling of life from the dead, of the darkness defeateD.

Ended the night, we uplift with the dawn our HosannA!

Rise in our hearts, 0 Redeemer, and shine in Thy glorY1

Commendations to all the above named, as also to William Hayden, Mrs. Margot Crosse, w1i0 was one of the six submitting real acrostic puzzles, and P. M., whose art always conceals art : Eggs, so alike, contain such varied hopeS. Ant-eater, platypus, snake, swan, emU, Seals in the shell a life-spark, each its owN: Take, Lord, my soul—this egg alas! grown colD, Enfold and warm it, nourish it with MannA,

Revive its germ of immortalitY. I did not feel that J. H. Prynne's entry, 'In the manner of George Herbert,' had the homeliness of imagery which one would expect from the Jacobean poet; "ierbert would surely have

rhymed the para ..cets; but it is worth print- ing in its own right .

Each day my vex'd heart cri'd whole streames of teareS At thinking how by Thine owne children ThoU Should'st have been rudely slaiN; Then, even as I pin'd, a Heav'nly HanD Eas'd my hot teares, as streames which finde the seA: