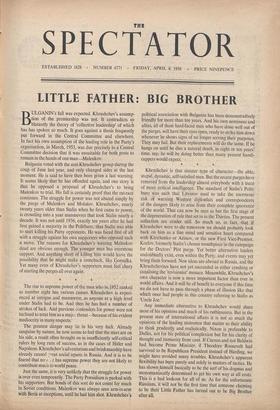 BULGANIN's fall was expected. Khrushchev's assump- tion of the premiership was not. It contradicts so blatantly the theory of 'collective leadership' of which has has spoken so much. It goes against a thesis frequently put forward in the Central Committee and elsewhere. In fact his own assumption of the leading role in the Party's organisation, in. March, 1953, was due precisely to, a Central Committee decision that it was unsuitable for both posts to remain in the hands of one man—Malenkov.

Ihilganin voted with the anti-Khrushchev group during the coup of June last year, and only changed sides at the last moment. He is said to have then been given a last warning. It seems likely that he has offended again, and one story is that he opposed a proposal of Khrushchev's to bring Malenkov to trial. His fall is certainly proof that the rat-race continues. The struggle for power was not abated simply by the purge of Malenkov and Molotov. Khrushchev, nearly twenty years older than Stalin when he first came to power, is crowding into a year manoeuvres that took Stalin nearly a decade. It was not until 1936, exactly ten years after he had first gained a majority in the Politburo; that Stalin was able to start killing his. Party opponents. He was faced first of all with a struggle against his own supporters_ who opposed such a move: The reasons for Khrushchev's wanting Malenkov dead are obvious enough. The younger man has enormous support. And anything short of killing "him would leave the possibility that he might make a comeback, like Gotnitlka. Yet many even of Khrushchev's suppOrters must feel of starting the purges all over again.•* * * . . The rise to supreme power of the man who 111,1952 ranked as number eight has various causes. Khrushchev is experi- enced at intrigue and manoeuvre, as anyone at a high level under Stalin had to be. And then he has had a number of strokes of luck. And previous contenders for power were not inclined to treat him as a major threat—because of his evident mediocrity in many respects.'

The greatest danger may lie in his very luck. Already sanguine by nature, he now seems to feel that the stars are op his side, a result often brought on in insufficiently self-critical 'rulers by long runs of success, as in the cases of Hitler and Napoleon. Khrushchev's adventurism and brinkmanship have already caused ',feat social upsets in Russia. And it is to be feared that no- i i e has supreme power they are not likely to contribute much to world peace.

Just the same, it is very unlikely that the struggle for power is over even temporarily. The Party Prwsidium is packed with his supporters. But bonds of this sort do not, count for much in Soviet conditions. Malenkov was always seen arm-in-arm with Beria at receptions, until he had him shot. Klu.ushchev's political association with Bulganin has been demonstratively friendly for more than ten years. And his own nominees and allies, all of them hard-faced men who have done well out of the purges, will have their eyes open, ready to strike him down whenever he shows signs of no longer serving their purposes. They may fail. But their replacements will do the.same. If he hangs on until he dies a natural death, in eight or ten years' time, say, he will .be doing better than_ many present handi- capperSwould expect. 4,, * Khrushchev, is that Sinister •type of character—the able; stupid, dynamic, self:satisfied man.'But the recent purges have removed' from the leaderShip almost eierybody with a trace of more critical intelligence. The standard of Stalin's Polit- buro was such that Litvinov used to take the enormous risk of warning Western diplonfats and correspondents of the dangers likely to arise from their complete ignorance of the world. That can now be seen as but the first stage of the degeneration of rule that set in in the Thirties. The present collection are cruder still. So .much so, in fact, that if Khrushchev were to die tomorrow we should probably look back on him as a fine mind and sensitive heart compared with Kirichehko or Atistov, or. the new First Vice-Premier, Kozlov, formerly Stalin's chosen mouthpiece in the campaign for the Doctors' Plot purge. Yet better alternative leaders undoubtedly exist, even within the Party, and events may yet bring them forward. NeW ideas are abroad in Russia, and the Khrushchevites have not yet succeeded in either crushing or canalising the 'revisionist' menace. Meanwhile, Khrushchev's own character is now a more important factor than ever in world affairs: And it-will be of benefit to everyone if this time we do not have to pass through a phase of illusion like that which once had people in this country referring to Stalin as `Uncle Joe.'

Any immediate .alternative to Khrushchev would share most of his opinions and much of his ruthlessness. But in the present state of international affairs it is not so much the opinions of the leading statesmen that matter as their ability to think prudently and realistically. Nixon, is preferable to Dulles, not for his political 'complexion but for his clarity of thought and immunity from cant. If Curzon and not Baldwin had become Prime Minister, if Theodore Roosevelt had survived to be Republican President instead of Harding, we might have avoided many troubles. Khrushchev's apparent flexibility has been purely and solely in matters of tactics. He has shown.himself basically to be the Serf of his dogmas and monoixianiacally determined to get his own way at all costs. This is a bad lookout for all of us. As for the unfortunate Russians, it will not be the first time that someone claiming to- be their Little Father has turned out to be Big Brother after all.