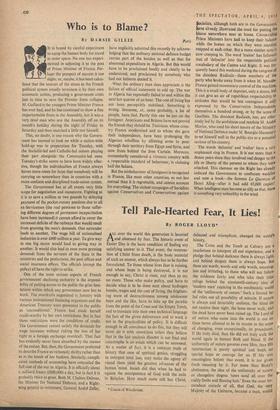 Who is to Blame?

By DARSIE GILLIE Paris IT is hoped by careful experiment to equip the human body for travel in outer space. No one has experi- mented in adjusting it to the post of Prime Minister of France. Per- haps the prospect of success is too slight; or, maybe, it has been calcu- lated that the sources of the strain in the French political system usually terminate it by their own automatic action, producing a government crisis just in time to save the Premier from collapse. M. Gaillard is the youngest Prime Minister France has ever had, and he has•continued to show a fine imperturbable front in the Assembly, but it was a very tired man who saw the Assembly off on its month's holiday during the night of Friday to Saturday and then snatched a little rest himself.

This, no doubt, is one reason why the Govern- ment has seemed to look on while a nation-wide hold-up was in preparation for Tuesday, with the Socialist-led and Catholic-led unions playing their part alongside the Communist-led ones. Tuesday's strike seems to have been widely effec- tive, though the individualism of France always leaves more room for hope that somebody will be carrying on somewhere than in countries with a more uniform and disciplined trade-union system.

The Government has at all events very little scope for negotiation and manoeuvre. Fighting as it is to save a million or two pounds by delaying payment of the pocket-money pensions due to all ex-Servicemen (the real pensions to those suffer- ing different degrees of permanent incapacitation have been increased) it cannot afford to cover the increased deficits of the railways that would result from granting the men's demands. One surrender leads to another. The wage bill of nationalised industries is over £800 million a year. To give way in one big sector would lead to giving way in another. It would also lead to even more pressing demands from the servants of the State in the ministries and the prefectures, the post offices and social insurance offices. The officials (except the police) all have the right to strike.

One of the most serious aspects of French governments' declining authority is the impossi- bility of putting across to the public the grim limi- tations within which any government now has to work. The overdrafts negotiated in January with various international financing organisms and the American Treasury were presented to the public as 'unconditional.' France had made herself credit-worthy by her own restrictions. But in fact those restrictions were the conditions of credit. The Government cannot satisfy the demands for wage increases without risking the loss of her right to a foreign exchange overdraft. That fact has evidently never been absorbed by the masses of the nation. But, then, the Government preferred to describe France as virtuously thrifty rather than as in the hands of her bankers. Similarly, compli- cated methods of accounting have concealed the full cost of the war in Algeria. It is officially about a milliard francs (£800,000) a day, but in fact it is probably twice as great. Both M. Chaban-Delmas, the Minister for National Defence, and a Right- wing general in retirement, General Andre Zeller, have implicitly admitted this recently by acknow- ledging that the ordinary national defence budget carries part of the burden as well as that for abnormal expenditure in Algeria, But this would have to be proclaimed loudly and clearly to be understood, and proclaimed by somebody who had not hitherto denied it. • What the ordinary man does appreciate is the failure of official statements to add up. The war in Algeria has repeatedly failed to end within the next last quarter of an hour. The cost of living has not been perceptibly stabilised. Something is wrong. Someone, or, more probably, a lot of people, have lied, Partly this can be put on the foreigner. Americans and Britons have not proved the friends they should be. Tunisians, whose coun- try France modernised and to whom she gave their independence, have been prolonging the Algerian rebellion by allowing arms to pour through their territory from Egypt and Syria, and now from behind the Iron Curtain. Morocco, momentarily considered a virtuous country with a respectable standard of behaviour, is claiming half the Sahara.

But the misbehaviour of foreigners is recognised in France, like most other countries, as not less normal than it is regrettable, and cannot account for everything. The violent campaigns of Socialists against Conservatives and Conservatives against pelalists, although both are in the Government, have already illustrated the need for putting the blame somewhere near at home. Circus-riding Prime Ministers have had to keep their balance while the horses on which they were standing snapped at each other. But a more sinister note Is now creeping in. The word 'traitor' has followed that of 'defeatist' into the respectable political vocabulary of the Centre and Right. It was fre- quently heard this weekend during the congress of the dissident Radicals—those members of the party who broke away from it when M. Mendes' France gained momentary control of the machine! This is a small body of deputies, only a dozen, but it can give an air of republican respectability to attitudes that would be less contagious if onlY expressed by the Conservative Independents, themselves a hundred strong, or by the score of Gaullists. The dissident Radicals, too, are effee- lively led by the ambitious and resolute M. Andre Morice, who used his short tenure of the Ministry of National Defence under M. Bouries-MaunourY to set himself well in the public eye as a potential saviour of his country.

The words 'defeatist' and 'traitor' have a very unpleasant ring in France. It is not more than a dozen years since they involved real danger to the life or liberty of the persons to whom they were attached. This clamour on the Right has already induced the Government to confiscate weeklies and now a book—the famous La Question of Henri Alleg—after it had sold 65,000 copies! When intelligent men become as silly as that, there is something very unhealthy in the wind.