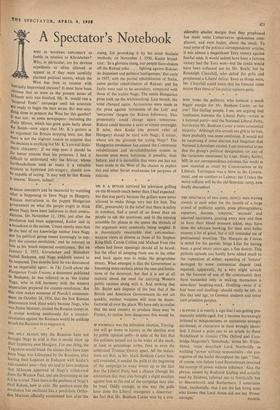 WHY IS WESTERN DIPLOMACY SO

feeble in relation to Khrushchev? Why, in particular, are his devious expedients so often allowed to appear as if they were carefully planned political moves, which the West has then to counter with hurriedly improvised excuses? It must have been obvious that as soon as the present series of H-bomb tests was finished, Mr. K. would run a `Suspend Tests!' campaign until his scientists are ready to begin the next series. But was any- thing done to, prepare the West for this gambit? It was not : so some newspapers—including the Daily Mirror, which has gone quite batty about the Bomb—now argue that Mr. K.'s gesture is an argument for Britain stopping tests, too. But there is not the slightest reason to suppose that the decision is anything but Mr. K.'s normal diplo- matic chicanery : if we stop tests it should be for better reasons than his promises. I find it difficult to understand why the Mirror, whose hardheadedneis used to make it a valuable antidote to hysterical Jeft-wingery, should now be capable of saying, 'It may well be that Russia Is sincere.' Sincere, indeed!