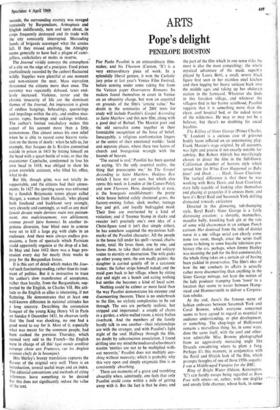 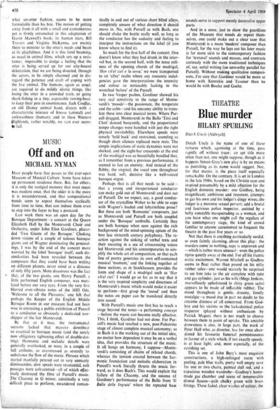 Pier Paolo Pasolini is an extraordinary film- maker, and his Theorem (Curzon, 'X') is a very extraordinary piece of work. In a splendidly liberal gesture, it won the Catholic jury prize at last year's Venice Film Festival, before coming under some raking fire from the Vatican paper Osservatore Romano. Its makers found themselves in court in Venice on an obscenity charge, but won an acquittal on grounds of the film's 'artistic value.' No doubt in the seminaries of 2001 texts for study will include Pasolini's Gospel According to Saint Matthew and this new film, along with a good deal of Runnel. The Marxist poet and the old surrealist come together in their formidable recognition of the force of belief. Inescapably, a religious confrontation lingers at the centre of their emotional worlds : lucid and separate places, where these two haters of church and bourgeoisie wrangle with the hounds of heaven.

'The sacred is real,' Pasolini has been quoted as saying, 'it's the only essential reality, the thing that preoccupies me.' So The Gospel According to Saint Matthew, Oedipus Rex (which I have not yet seen, but which also opens this week in London at the Cameo-Poly), and now Theorem. Here, deceptively at ease, is the bourgeois establishment: the pretty white house behind safely shuttered gates, the factory-owning father, sleek mother, teenage boy and girl, and loyally bedraggled maid. Their lives are overturned by a kind of visitation; and if Terence Stamp in slacks and sweater isn't precisely one's own idea of a Christ-figure (and it isn't that simple either), he has somehow acquired the mysterious hall- marks of the Pasolini character. All the people in the house fall under his spell—sexual, charis- matic, total. He loves them, one by one, and leaves them, to tale their shaken and solitary routes to eternity or destruction. The wife picks up other young men; the son madly paints; the daughter is carried quietly off in a catatonic trance; the father strips himself naked; and the maid goes back to her village, where by sitting day and night on a bench and eating nothing but nettles she becomes a kind of local saint.

Nothing could be calmer or more lucid than the way Pasolini demonstrates his extreme and disconcerting theorem. There is no underbrush to the film, no stylistic complexities to be cut through. The sets are perfectly realistic, but stripped and impersonal: a couple of chairs in a garden, a white-walled room, a misty Italian riverbank. And the members of the family hardly talk to one another—their relationships are with the stranger, and with Pasolini's light night of the soul. Halfway through the film, no doubt by subconscious association, I found drifting into my mind the mediaevalschoolman's maxim 'entities are not to be multiplied with- out necessity.' Pasolini does not multiply any- thing without necessity; which is probably why this very open and deeply enigmatic film is so consistently absorbing.

There are moments of a grave and trembling absurdity when, admittedly, one feels that only Pasolini could come within a mile of getting away with it. But the fact is that he does; and the part of the film which in one sense risks the most is also the most compelling: the whole mystical adventure of the maid, superb), played by Laura Betti, a small, severe black figure first seen in her stainless steel kitchen

and, then lugging her heavy suitcase back into

the middle ages and taking up her obdura:e station in the farmyard. Whatever she finds in this forsaken village„ and whatever the villagers find in her barmy sainthood, Pasolini suggests that it is something more than the clean, cool hospital bed, or the naked terror of the wilderness. He may or may not be a believer, but there's no doubting his social loyalties.

The Killing of Sister George (Prince Charles, 'X' London) is a curious case of grievous bodily harm inflicted on an unprotesting play. Frank Marcus's stage original, by all accounts, was light and precise if not exactly notable for subtlety. But Robert Aldrich has mystifyingly chosen to direct the film in the full-blown, Californian chamber of horrors style which served him for What Ever Happened to Baby Jane? and Hush . . . Hush. Sweet Charlotte.

The tactical difference is that there he was working with Bette Davis and Joan Crawford, stars fully capable of looking after themselves and playing at gargoyles if it amuses them; and here it's Beryl Reid and Susannah York drifting dismasted towards caricature Directed in this glowering, tub-thumping style, Beryl Reid's Sister George is a fairly distressing creation: a slovenly, mannerless, maudlin bully, knocking back gin at the rate of some wild charwoman in an antique Punch cartoon. Her dismissal from the role of district nurse in a Bac village serial can clearly come none too soon; though, since the series itself seems to belong to some bucolic television pre- history (the era, perhaps, when Jimmy Hanley was manning the pub for the first commercials), the whole thing takes on a certain air of having been pickled in preservative. The film's idea of

how the BBC conducts its affairs is actually

rather more disconcerting than anything in the Sister George ménage, not least the notion of the lady producer tramping from 'town' to a location that seems to waver between Hamp- stead and Hammersmith to deliver a Corpora- tion rebuke.

At the end, there's the famous scene of lesbian embraces between Susannah York and Coral Browne, which everyone concerned seems to have agreed to regard as essential to audience understanding, or plot development, or something. The chop-logic of Hollywood remains a marvellous thing. So, in some ways, does the scene itself, with the cool and other- wise admirable Miss Browne photographed from an aggressively menacing angle like Dracula considering where to plant a fang. Perhaps it's this moment, in conjunction with the florid and fiftyish look of the film, which prompts thoughts of one of those 1950s sequels: I was a Middle-aged Vampire for the BBC.

Ring of Bright Water (Odeon, Kensington, V') can hardly escape being regarded as Born Free with otters—or, rather, with one doglike and unruly little charmer, whose bark, in some-

what un-otter fashion, seems to be more formidable than his bite. The notion of getting away from it all with a small and cantankerous pet is firmly entrenched in this adaptation of Gavin Maxwell's book; its human stars, Bill Travers and Virginia McKenna, are mainly there to minister to the otter's needs and beam at its playfulness. And it is this fond beaming, as usual in animal films, which sets up a resis- tance: impossible to dodge a feeling that the otter is being served up for our city-bound delectation, that we are being directed, through the actors, to be simply charmed and to dis- regard the patience and craft of coping with the live animal. The humans, again as usual, are required to do mildly idiotic things, like losing the otter in a crowded train, or going shark-fishing in a tiny, capsizable rowing-boat, to keep their pets in countenance. Jack Coulfer, an old Disney animal hand, directs with a characteristic mixture of finesse (animal) and awkwardness (human); and in these Western klighlands, rather notably, no rain ever seems In fall.