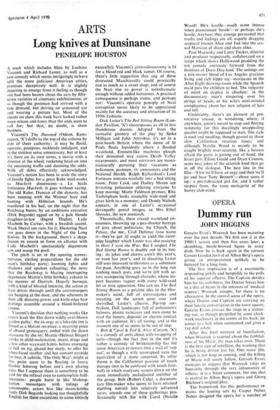 A week which includes films by Luchino Visconti and Richard Lester, as well as a new comedy which seems intriguingly to have split the more judicious American critics, promises deceptively well. It is slightly dejecting to emerge from it feeling as though one had been beaten about the ears by fifty- seven varieties of cinematic exhibitionism; or as though the postman had arrived with a rate demand, but driving an armoured car and wearing a picture hat. Most of the means on show this week have looked rather more ornate and fancy than the ends seem to call for; but that, no doubt, is show business.

Visconti's The Damned (Odeon, Kens- ington, 'X') drifts to the top of the column by dint of sheer authority: it may be florid, operatic, pompous, recklessly indulgent, and in the strictest sense unnecessary, but at least it's there on its own terms, a movie with a director at the wheel, rocketing head-on into the oncoming traffic and damning the odds. With all debts effectively acknowledged, Visconti's notion has been to scale the story of family fights for a great Ruhr steel-works to Macbeth dimensions—a La Scala fortissimo Macbeth, it goes without saying. The old Ruler, Duncan of the dynasty, has been running with the Weimar hare and hunting with Hitlerian hounds. He's murdered in his bed, on the night that the Reichstag burns, by an ambitious executive (Dirk Bogarde) egged on by a pale blonde daughter-in-law (Ingrid Thulin), Lady Macbeth by Cartier, with a Swedish accent. Weak liberal son runs for it; blustering Nazi son goes down in the Night of the Long Knives. In the background, there's a deep- frozen ss cousin to form an alliance with Lady Macbeth's spectacularly degenerate son and scoop the pool.

The pitch is set in the opening scenes: nervous, circling preparations for the old man's birthday party; looming lights and shadows and opulent colouring; the news that the Reichstag is blazing interrupting degenerate Martin's little birthday cabaret in the manner of Dietrich. Heavily baroque, with a kind of bloated intensity, the action at least drives through until the stormtroopers are banging at the door, and the schemers in their silk dressing-gowns and knife-edge hair partings assemble around a blood-boltered corpse.

Visconti's decision that nothing works like excess leads the film down wildly over-blown garden paths: the SA orgy at a lakeside inn is filmed as a blatant set-piece, a steaming piece of absurd grotesquery, ended with the dawn massacre by the ss; Martin (Helmut Berger) works in child-molestation, incest, drugs and a few other wayward habits before emerging in full ss rig, glazed but steely, to offer his whey-faced mother and her consort cyanide for two. A subtitle, 'The Only Way', might at this point seem to be floating in heavy Gothic lettering before one's own glazing eyes. But I suppose there is something to be said for the refusal even to contemplate half- measures : people burst in like Shakesp- earian messengers with tidings of catastrophe; actors hiss like steam-kettles (only Dirk Bogarde looking too thoughtfully English for these excursions to come entirely

naturally); Visconti's gotterdiimmerung is lit for a blood-red and black sunset. Of course, there's little suggestion that any of these distracted Macchiavellis could practically run as much as a sweet shop; and of course the Nazi rise to power is melodramatic enough without added hormones. A practical consequence is perhaps ironic, and perhaps not: Visconti's operatic panoply of Nazi corruption seems likely to be appreciated mainly for the accuracy and attraction of its 1930s fashions.

Dick Lester's The Bed Sitting Room (Lon- don Pavilion, 'X') encompasses us all in less thunderous dooms. Adapted from the surrealist goonery of the play by Spike Milligan and John Antrobus, it's set in a post-bomb Britain where the dome of St Pauls floats lopsidedly above a flooded wasteland, Emmett-like machines plough their demented way across Death Valley escarpments, and most survivors are mono- maniacally pursuing their vocations as policemen, postmen, Tv announcers and the National Health. Ralph Richardson's Lord Fortnum mutates wistfully into a bed sitting room; Peter Cook and Dudley Moore are levitating policemen ordering everyone to keep moving; Marty Feldman prances; Rita Tushingham looks staunchly wide-eyed and gives birth to a monster; and Dandy Nichols appears, in one of Lester's occasional derangedly genial images, as Mrs Ethel Shroake, the new monarch.

Theoretically, these crazed wasteland en- counters, throwing up a pea-shooter barrage of jests about politicians, the Church, the Palace, the BBC, Civil Defence (you name it—they've got it) ought to yield the razor- edge laughter which Lester was also essaying in How I won the War. But I suspect The Bed Sitting Room is doubly out in its tim- ing: its jokes and alarms aren't this year's, or even last year's, and in directing Lester still uses incessant restlessness as a substitute for pace. Anything goes, so in the long run nothing much goes, and we're left with ac- tors scampering through charades whose im- port becomes vaguer with every wild-eyed hit or miss apparition. One can see The Bed Sitting Room as a pristine idea in the film- maker's mind, full of extravagance and meaning, on the screen gone sour and shrivelled. Lester's allusive, flip-top sur- realism, Dali landscapes full of policemen's helmets, plastic raincoats and men come to read the meters, depends on electric contact with an audience. It's all timing, and at the moment one of us seems to be out of step.

Bob & carol & Ted & Alice (Curzon, 'X') is a comedy of sorts about wife-swapping of sorts—though the fact that in the end it's rather a comedy of brinkmanship has led some American reviewers into a wail of 'cop out', as though a wife unswapped were the equivalent of a stone unturned. Its other theme is the Californian pastime of touch therapy (not to be confused with touch foot- ball) in which everyone scrums down on the most immediately maladjusted member of the group. Bob (Robert Culp), a documen- tary film-maker who seems to have retained startling naivete into relatively advanced years, attends one of these gatherings pro- fessionally with his wife Carol (Natalie Wood). He's hostile—much more intense when pronounced 'hostle'—or perhaps she's hostle. Anyhow, they emerge persuaded that truths and feelings are all, eagerly dragging sceptical friends Alice and Ted into the sex- ual Marxism of share and share alike.

Paul Mazursky and Larry Tucker, director and producer respectively, collaborated on a script which shows Hollywood prodding the sex comedy anxiously forward from the frontiers of Doris Day-land. The settings are a mix-master blend of Los Angeles gracious living and rich hippy rig—marijuana in the After Eight drawing-room while the Spanish maid puts the children to bed. The vulgarity of mind on display is absolute: in the documentary man's simpering over his strings of beads, or his wife's mini-minded complacency about her new religion of kiss and tell.

Undeniably, there's an element of pro- vocative unease, in wondering where, if anywhere, satire's meant to stop and fleeting sympathy for this dazzlingly unappealing quartet might be supposed to start. The style is cool and needling, though geared to those slow Californian reaction times; and although Natalie Wood is mainly to be caught brightly over-reacting, like a hostess afraid the party is getting out of hand, the lesser pair, Elliott Gould and Dyan Cannon, score neat jokes of the actorish kind that go in off the dialogue. The best line in the film—'First we'll have an orgy and then we'll go and hear Tony Bennett'—about sums it up: a pre-fabricated jest for, and I rather suspect from, the tame menagerie of the bunny club mind.