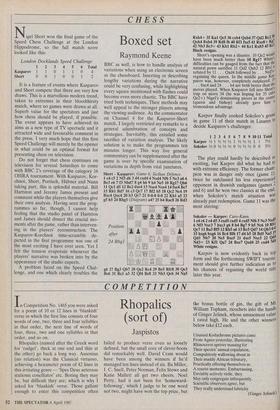 Nigel Short won the final game of the Speed Chess Challenge at the London Hippodrome, so the full match score looked like this: London Docklands Speed Challenge

It is a feature of events where Kasparov and Short compete that there are very few draws. This is a marvellous modern trend, taken to extremes in their bloodthirsty match, where no games were drawn at all. Superb value for the spectators and just how chess should be played, if possible. The event appears to have achieved its aims as a new type of TV spectacle and it attracted wide and favourable comment in the press. I very much hope that this first Speed Challenge will merely be the opener in what could be an optimal format for presenting chess on television.

Do not forget that chess continues on television for several Saturdays to come with BBC 2's coverage of the category 16 OHRA tournament. With Kasparov, Kor- chnoi, Short, Portisch, Hiibner and Nunn taking part, this is splendid material. Bill Hartston and Jeremy James present and comment while the players themselves give their own analysis. Having seen the prog- rammes so far, though, I cannot help feeling that the studio panel of Hartston and James should dissect the crucial mo- ments after the game, rather than interven- ing in the players' reconstruction. The Kasparov-Korchnoi time-scramble de- picted in the first programme was one of the most exciting I have ever seen. Yet I felt the tension evaporate whenever the players' narrative was broken into by the appearance of the studio experts.

A problem faced on the Speed Chal- lenge, and one which clearly troubles the BBC as well, is how to handle analysis of variations when using an electronic screen as the chessboard. Inserting or describing lengthy variations during the narrative could be very confusing, while highlighting every square mentioned with flashes could become even more chaotic. The BBC have tried both techniques. Their methods may well appeal to the stronger players among the viewing audience. As the commentator on Channel 4 for the Kasparov-Short match, I largely restricted my remarks to a general adumbration of concepts and strategies. Inevitably, this entailed some sacrifice of variation analysis. The likely solution is to make the programmes ten minutes longer. This way live general commentary can be supplemented after the game is over by specific examination of variations in depth from vital junctures.

Karpov finally cooked Sokolov's goose in game 11 of their match in Linares to decide Kasparov's challenger.

The play could hardly be dekribed es exciting, but Karpov did what he had to with extreme efficiency. The former chant' pion was in danger only once (game 1), twice he outclassed his less experienced opponent in drawish endgames (games 2 and 6) and he won two classics at the end, when Sokolov's match situation Was already past redemption. Game 11 was the most stirring:

Karpov is now evidently back in top form and the forthcoming SWIFT tourne- ment should give further indication as to his chances of regaining the world title later this year.