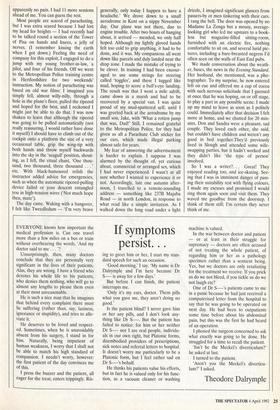 EVERYONE knows how important the medical profession is. Can one travel more than a few miles on a bus or train without overhearing the words, 'And my doctor said to me . . . '?

Unsurprisingly, then, many doctors conclude that they are personally very significant in the lives of their patients. Alas, they are wrong. I have a friend who devotes his whole life to his patients, who denies them nothing, who will go to almost any lengths to please them even at their most unreasonable.

He is such a nice man that he imagines that behind every complaint there must lie suffering (rather than, say, laziness, ignorance or stupidity), and tries to alle- viate it.

He deserves to be loved and respect- ed. Sometimes, when he is unavoidably absent from his surgery, I stand in for him. Naturally, being impatient of human weakness, I worry that I shall not be able to match his high standard of compassion. I needn't worry, however: the first patient of the day convinces me of this.

I press the buzzer and the patient, all eager for the treat, enters trippingly. Ris- ing to greet him or her, I start my stan- dard speech for such an occasion.

'Good morning,' I say. 'My name is Dr Dalrymple and I'm here because Dr S— is away for a few days.'

But before I can finish, the patient interrupts me.

`Only it's my ears, doctor. Them pills what you gave me, they aren't doing no good.'

Is the patient blind? I never gave him or her any pills, and I don't look any- thing like Dr S—. But the patient has failed to notice: for him or her neither Dr S— nor I are real people, individu- als in our own right, but Platonic forms, disembodied providers of prescriptions, sick notes and referral letters to hospital. It doesn't worry me particularly to be a Platonic form, but I feel rather sad on Dr S—'s behalf.

He thinks his patients value his efforts, but in fact he is valued only for his func- tion, as a vacuum cleaner or washing machine is valued.

In the war between doctor and patient — or at least in their struggle for supremacy — doctors are often accused of not treating the whole patient, of regarding him or her as a pathology specimen rather than a sentient being. Yes, but we doctors are only retaliating for the treatment we receive. If you prick us do we not bleed, if you tickle us do we not laugh etc?

One of Dr S—'s patients came to me in a panic because he had just received a computerised letter from the hospital to say that he was going to be operated on next day. He had been to outpatients some time before about his abdominal pain, but this was the first he had heard of an operation.

I phoned the surgeon concerned to ask what exactly was going to be done. He struggled for a time to recall the patient.

'Isn't he the Meckel's diverticulum?' he asked at last.

I turned to the patient.

'Aren't you the Meckel's diverticu- lum?' I asked.