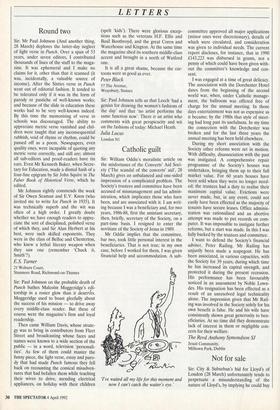 Sir: William Oddie's moralistic article on the misfortunes of the Converts' Aid Soci- ety (`The scandal of the converts' aid', 28 March) gives an unbalanced and one-sided impression of a complicated problem. The Society's trustees and committee have been accused of mismanagement and lax admin- istration, which implicates those who have been, and are associated with it. I am writ- ing because I was a beneficiary and, for two years, 1986-88, first the assistant secretary, then, briefly, secretary of the Society, on a part-time basis. I resigned to enter the novitiate of the Society of Jesus in 1989.

Mr Oddie implies that the committee, bar two, took little personal interest in the beneficiaries. That is not true; in my own case, before I worked for them, I was given financial help and accommodation. A sub- 'I've waited all my life for this moment and now I can't catch the waiter's eye.' committee approved all major applications (minor ones were discretionary), details of which were circulated, and consideration was given to individual needs. The current report discloses, for instance, that in 1990 £143,223 was disbursed in grants, not a penny of which could have been given with- out the committee's knowledge and con- sent.

I was engaged at a time of great delicacy. The association with the Dorchester Hotel dates from the beginning of the second world war, when, under Catholic manage- ment, the ballroom was offered free of charge for the annual meeting. In those days entertainment was not as expensive as it became; by the 1980s that style of meet- ing had long past its usefulness. In my time the connection with the Dorchester was broken and for the last three years the annual meeting has been held elsewhere.

During my short association with the Society other reforms were set in motion. With difficulty, disassociation with the past was instigated. A comprehensive repair programme of the Society's houses was undertaken, bringing them up to their full market value. For 60 years houses have been sold when they were no longer need- ed; the trustees had a duty to realise their maximum capital value. Evictions were never made, but, in any event, could not easily have been effected as the majority of tenants have secure leases. Office adminis- tration was rationalised and an abortive attempt was made to put records on com- puter. It was impossible to instigate further reforms, but a start was made. In this I was fully backed by the trustees and committee.

I want to defend the Society's financial adviser, Peter Railing. Mr Railing has unjustly been made a scapegoat. He has been associated, in various capacities, with the Society for 39 years, during which time he has increased its capital strength, and protected it during the present recession. His performance has been favourably noticed in an assessment by Noble Lown- des. His resignation has been effected as a result of an unresolved legal technicality alone. The impression given that Mr Rail- ing was involved in the Society solely for his own benefit is false. He and his wife have consistently shown great generosity to ben- eficiaries. At no time did they demonstrate lack of interest in them or negligible con- cern for their welfare.