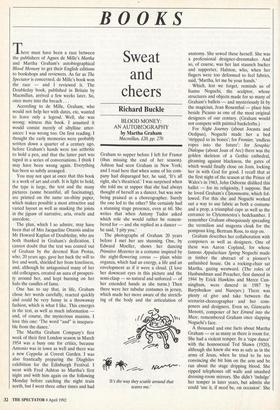 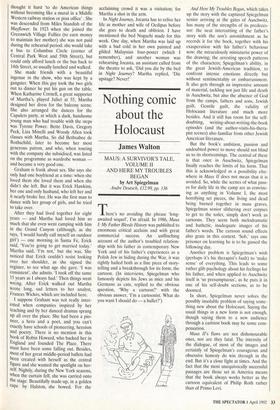 Page 32, 4 April 1992 — BOOKS T here must have been a race between the publishers
Close

BOOKS T here must have been a race between the publishers

of Agnes de Mille's Martha and Martha Graham's autobiographical Blood Memory to get their English editions to bookshops and reviewers. As far as The Spectator is concerned, de Mille's book won the race — and I reviewed it. The Doubleday book, published in Britain by Macmillan, arrived a few weeks later. So, once more into the breach . ..

According to de Mille, Graham, who would not help her with dates, etc, wanted to leave only a legend. Well, she was wrong: witness this book. I assumed it would consist merely of sibylline utter- ances: I was wrong too. On first reading, I thought the early memories were probably written down a quarter of a century ago, before Graham's hands were too arthritic to hold a pen, and that the latter part was taped in a series of conversations. I think I may have been wrong again. Everything has been so subtly arranged.

You may not spot at once that this book is a work of art and craft. It is light to hold, the type is large, the text and the many pictures (some beautiful, all fascinating), are printed on the same un-shiny paper, which makes possible a most attractive and varied layout as well as masking the joints in the jigsaw of narrative, aria, oracle and anecdote. .

The plan, which I so admire, may have been that of Mrs Jacqueline Onassis and/or Mr Howard Kaplan of Doubleday, who are both thanked in Graham's dedication. I cannot doubt that the text was coaxed out of Graham by the devoted Ron Protas, who, 20 years ago, gave her back the will to live and work, shielded her from loneliness, and, although he antagonised many of her old colleagues, created an aura of prosperi- ty around her, and kept burning on her halo the candles of fame.

One has to say that, in life, Graham chose her words carefully, reacted quickly and could be very funny in a throwaway fashion, which is what I like. This emerges in the text, as well as much information and, of course, the mysterious maxims. I love this one: 'The word "and" is insepara- ble from the dance.'

The Martha Graham Company's first week of their first London season in March 1954 was a busy one for critics, because Antonio was in town as well and there was a new Coppelia at Covent Garden. I was also frantically preparing the Diaghilev exhibition for the Edinburgh Festival. I went with Fred Ashton to Martha's first night and with him again on the following Monday before catching the night train north, but I went three other times and had

Graham to supper before I left for France (thus missing the end of her season). Ashton had seen Graham in New York; and I read here that when some of his com- pany had disparaged her, he said, 'It's all right, she's theatrical.' I was surprised when she told me at supper that she had always thought of herself as a dancer, but was now being praised as a choreographer. Surely the one led to the other? She certainly had a stunning stage presence, even at 60. She writes that when Antony Tudor asked which role she would rather be remem- bered for — and she replied as a dancer he said, 'I pity you.'

The photographs of Graham 20 years before I met her are stunning. One, by Edward Moeller, shows her dancing Primitive Mysteries in a costume inspired by the night-flowering cereus — plain white organza, which had an energy, a life and an envelopment as if it were a cloud. (I love her downcast eyes in this picture and the semi-clasp — so natural and unforced — of her extended hands as she turns.) Then there were her tubular costumes in jersey, which made her more aware of the stretch- ing of the body and the articulation of it's the way they scuttle around that scares me.' anatomy. She sewed these herself. She was a professional designer-dressmaker. And so, of course, was her last staunch backer and supporter, Halston, who, when her fingers were too deformed to feel fabrics, said, 'Martha, let me be your hands.'

Which, lest we forget, reminds us of Isamu Noguchi, the sculptor, whose structures and objects made for so many of Graham's ballets — and mysteriously lit by the magician, Jean Rosenthal — place him beside Picasso as one of the most original designers of our century. (Graham would not compete with painted backcloths.) For Night Journey (about Jocasta and Oedipus), Noguchi made her a bed `stripped to its bones'; for Frontier, 'endless ropes into the future'; for Seraphic Dialogue (about Joan of Arc) there was the golden skeleton of a Gothic cathedral, gleaming against blackness, the gates of which would finally close on Joan, locking her in with God for good. I recall that at the first night of the season at the Prince of Wales's in 1963, John Osborne disliked this ballet — for its religiosity, I suppose. But he loved Graham's Clytemnestra, which fol- lowed. For this she and Noguchi worked out a way to use fabric as both a costume and a prop, a triumphal cape as well as the entrance to Clytemnestra's bedchamber. I remember Graham obsequiously spreading the vermilion and magenta cloak for the pompous king, Bertram Ross, to step on.

Graham describes her collaboration with composers as well as designers. One of these was Aaron Copland, for whose famous Appalachian Spring Noguchi made in timber the abstract of a pioneer's unfinished house. On a rocking-chair sat Martha, gazing westward. (The roles of Husbandman and Preacher, first danced in 1944 by Erick Hawkins and Merce Cun- ningham, were danced in 1987 by Baryshnikov and Nureyev.) There was plenty of give and take between the scenarist-choreographer and her com- posers and designers. Even so, Giancarlo Menotti, composer of her Errand into the Maze, remembered Graham once slapping Noguchi's face.

A thousand and one facts about Martha Graham — or as many as there is room for. She had a violent temper. In a 'rape dance' with the homosexual Ted Shawn (1920), although she knew she was as safe as in the arms of Jesus, when he tried to be too convincing she bit him on the arm and he ran about the stage dripping blood. She ripped telephones off walls and smashed dressing-room mirrors. She didn't 'indulge' her temper in later years, but admits she could 'use it, if need be, on occasion'. She

thought it hard `to do American things without becoming like a mural in a Middle Western railway station or post office' . She was descended from Miles Standish of the Mayflower. In 1923 when she joined the Greenwich Village Follies (to earn money to maintain her mother) she was not paid during the rehearsal period: she would take a bus to Columbus Circle (corner of Central Park West and 59th Street), but could only afford lunch or the bus back to 14th Street, so usually lunched and walked.

She made friends with a beautiful ingenue in the show, who was kept by a gangster. When this guy took the two girls out to dinner he put his gun on the table. When Katharine Cornell, a great supporter of Martha's, played Juliet at 55, Martha designed her dress for the balcony scene. She also arranged the dances for the Capulets party, at which a dark, handsome young man who had trouble with the steps was Tyrone Power. Bette Davis, Gregory Peck, Liza Minelli and Woody Allen took classes with Martha. So did Bethsabee de Rothschild, later to become her most generous patron, and who, when touring with the company she subsidised, was listed on the programme as wardrobe woman and became a very good one.

Graham is frank about sex. She says she only had one boyfriend at a time: when she loved them she loved them and when she didn't she left. But it was Erick Hawkins, her one and only husband, who left her and it nearly broke her. He was the first man to dance with her group of girls, and he tried to take over.

After they had lived together for eight years — and Martha had loved him so much that she even went camping with him in the Grand Canyon (although, as she says, `I would hardly call myself an outdoor girl') — one morning in Santa Fe, Erick said, 'You're going to get married today.' Martha said, 'I'm not,' but she was. She noticed that Erick couldn't resist looking over her shoulder, as she signed the register, to see what age she gave. 'I was consistent', she admits. 'I took off the same 15 years as I always had.' Then things went wrong. After Erick walked out Martha wrote long, sad letters to her analyst, Frances Wickes, which are included here.

I suppose Graham was not really inter- ested when companies inspired by her teaching and by her danced dramas sprang up all over the place. She had been a pio- neer, a hero and a poet, and you can't exactly have schools of pioneering, heroism and poetry. There is no mention in this book of Robin Howard, who backed her in England and founded The Place. There must have been some falling out. Besides, most of her great middle-period ballets had been created with herself as the central figure and she wanted the spotlight on her- self. Nightly, during the New York seasons, when the curtain fell, she was carried onto the stage. Beautifully made-up, in a golden cape by Halston, she bowed. For the acclaiming crowd it was a visitation; for Martha a shot in the arm.

In Night Journey, Jocasta has to relive her life as mother and wife of Oedipus before she goes to death and oblivion. I have mentioned the bed Noguchi made for this work. One day, when Martha was laid up with a bad cold in her own painted and gilded Malaysian four-poster (which I remember), and another woman was rehearsing Jocasta, an assistant called from the theatre to ask, Did you die by the bed in Night Journey? Martha replied, Die upstage? Never!'