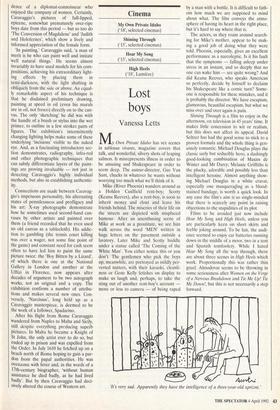 My Own Private Idaho has sex scenes in tableaux vivants, magazine covers that talk, and wonderful, silvery shots of leaping salmon. It misrepresents illness in order to be amusing and Shakespeare in order to seem deep. The auteur-director, Gus Van Sant, chucks in whatever he wants without worrying too much what we'll think of it.

Mike (River Phoenix) wanders around as a Holden Caulfield rent-boy; Scotty (Keanu Reeves), also a rent-boy, is soon to inherit money and clout and leave his friends behind. The miseries of their life on the streets are depicted with misplaced humour. After an unenthusing scene of Mike at work as a prostitute, we see him walk across the word 'MEN' written in huge letters on the pavement outside a lavatory. Later Mike and Scotty huddle under a statue called 'The Coming of the White Man'. You either notice this or you don't. The gentlemen who pick the boys up, meanwhile, are portrayed as mildly per- verted nutters, with their karaoki, cleanli- ness or Gene Kelly fetishes on display to make us laugh and, perhaps, to take the sting out of another rent-boy's account more or less to camera — of being raped

by a man with a bottle. It is difficult to fath- om how much we are supposed to mind about what. The film conveys the atmo- sphere of having its heart in the right place, but it's hard to say where that is.

The actors, as they roam around search- ing for Mike's mother, appear to be mak- ing a good job of doing what they were told. Phoenix, especially, gives an excellent performance as a narcoleptic. Is it his fault that the symptoms — falling asleep under stress in an instant, and so deeply that no one can wake him — are quite wrong? And did Keanu Reeves, who speaks American so perfectly, decide by himself to declaim his Shakespeare like a comic turn? Some- one is responsible for these mistakes, and it is probably the director. We have escapism, glamorous, beautiful escapism, but what we miss over and over again is pain.

Shining Through is a film to enjoy in the afternoon, on television in 45 years' time. It makes little concession to wit or realism, but this does not affect its appeal. David Seltzer has had the good sense to stick to a proven formula and the whole thing is gen- uinely romantic. Michael Douglas plays the classic surly but seducible hero, a dashingly good-looking combination of Maxim de Winter and Mr Darcy; Melanie Griffiths is the plucky, adorable and possibly less than intelligent heroine. Almost anything show- ing Michael Douglas in a white cravat, especially one masquerading as a blood- stained bandage, is worth a quick look. In any case the film's aim is so single-minded that there is scarcely any point in raising objections to the stupidities of its plot.

Films to be avoided just now include Hear My Song and High Heels, unless you are particularly keen. on short skirts and feeble joking around. To be fair, the audi- ence seemed to enjoy car batteries running down in the middle of a moor, two in a tent and Spanish tomfoolery. While I hated Hear My Song all the way through, there are about three scenes in High Heels which work. Proportionally this was rather thin

gruel. Almodovar seems to be throwing in some seriousness after Women on the Verge of a Nervous Breakdown and Tie Me Up! Tie Me Down!, but this is not necessarily a step forward.

'It's very sad. Apparently they have the intelligence of a three-year-old xprizni.'