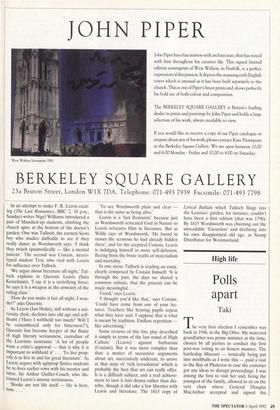 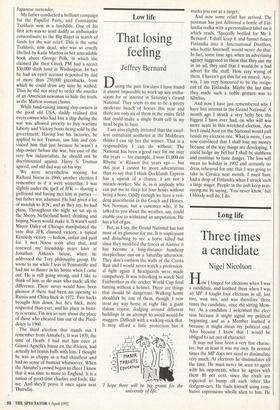 The very first election I remember was back in 1946, in the Big Olive. My maternal grandfather was prime minister at the time, chosen by all parties to conduct the first post-war voting in an honest manner. The battleship Missouri — ironically being put into mothballs as I write this — paid a visit to the Bay of Phaleron in case the commies got any ideas to disrupt proceedings. I was among the first to visit her and, being the youngest of the family, allowed to sit on the very chair where General Douglas MacArthur accepted and signed the

My father conducted a brilliant campaign for the Populist Party, and Constantine Tsaldaris won in a landslide. One of his first acts was to send daddy as ambassador extraordinaire to the Big Bagel in search of funds for the war relief. This is the same Tsaldaris, now dead, who was so cruelly libelled by Katie Marton in her unreadable book about George Polk, in which she claimed the then Greek PM had a secret $30,000 slush fund in Washington. In fact he had an open account deposited by dad of more than 250,000 greenbacks, from which he could draw any time he wished. Thus he did not need to order the murder of an American newsman to hide the truth, as the Marton woman claims.

While fund-raising among ship-owners in the good old USA, daddy realised that every owner who had lost a ship during the war was allowed priority to buy wartime Liberty and Victory boats being sold by the government. Having lost his factories, he applied to see Truman, saw him and con- vinced him that just because he wasn't a ship-owner before the war, but one of the very few industrialists, he should not be discriminated against. Harry S. Truman agreed, and old dad was on his way.

We were nevertheless rooting for Richard Nixon in 1960, another election I remember as if it were yesterday. I was slightly under the spell of JFK — sharing a girlfriend and having met him at parties but father was adamant. He had given a lot of moolah to R.N., and as they say, he had plans. Throughout the night we sat up in the Sherry Netherland hotel, drinking and hoping Nixon would make it. It wasn't until Mayor Daley of Chicago manipulated the vote that JFK claimed victory, a typical Kennedy victory — hollow, unfair and paid for. I met Nixon soon after that, and renewed my friendship years later at Jonathan Aitken's house, when he addressed the Tory philosophy group. He wrote to me while I was in Pentonville and had me to dinner in his house when I came out. He is still going strong, and I like to think of him as the man who made all the difference. There never would have been glasnost if there had been no opening to Russia and China back in 1972. Two hacks

brought him down, but he's back, more respected than ever, and his place in histo- ry is secure. I'm not so sure about the place of those who cheated him out of the Presi- dency in 1960.

The third election that stands out I remember from Annabel's. It was 1970, the time of Heath. I had met him once at Gianni Agnelli's house on the Riviera, had actually hit tennis balls with him. I thought he was as chippy as a bad chauffeur and had no sense of humour whatsoever. When the Annabel's crowd began to cheer I knew that it was time to move to England. It is a nation of good-time charlies and fools, like me. And they'll prove it once again next Thursday.