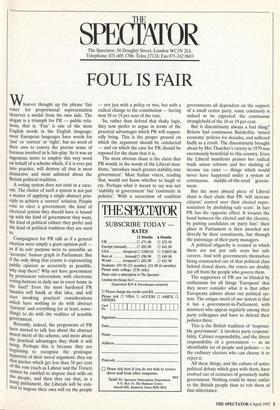 Campaigners for PR talk as if a general election were simply a giant opinion poll as if its sole purpose were to assemble an `accurate' human graph in Parliament. But if the only thing that counts is representing public opinion as accurately as possible, why stop there? Why not have government by permanent referendum, with electronic voting-buttons in daily use in every home in the land? Even the most hardened PR fanatics will baulk at that idea, and will start invoking practical considerations which have nothing to do with abstract 'fairness' and everything (or at least, some- thing) to do with the realities of sensible government.

Recently, indeed, the proponents of PR have started to talk less about the abstract moral merit of the scheme, and more about the practical advantages they think it will bring. Perhaps this is because they are beginning to recognise the grotesque hypocrisy of their moral argument: they say that parties which get less than 50 per cent of the vote (such as Labour and the Tories) cannot be entitled to impose their wills on the People, and then they say that, in a hung parliament, the Liberals will be enti- tled to impose their own will on the people — not just with a policy or two, but with a radical change to the constitution — having won 18 or 19 per cent of the vote.

So, rather than defend that shaky logic, they now prefer to argue in terms of the practical advantages which PR will suppos- edly bring. This is the proper ground on which the argument should be conducted — and on which the case for PR should be exposed for the sham that it is.

The most obvious sham is the claim that PR would, in the words of the Liberal man- ifesto, 'introduce much greater stability into government'. Most Italian voters, reading that, would not know whether to laugh or cry. Perhaps what it meant to say was not `stability in government' but 'continuity in policies'. With a succession of coalition governments all dependent on the support of a small centre party, some continuity is indeed to be expected: the continuous stranglehold of the 18 or 19 per cent.

But is discontinuity always a bad thing? Britain had continuous Butskellite 'mixed economy' policies for decades, and suffered badly as a result. The discontinuity brought about by Mrs Thatcher's victory in 1979 was enormously beneficial to this country. Even the Liberal manifesto praises her radical trade union reforms and her slashing of income tax rates — things which would never have happened under a system of continuous, middle-of-the-road govern- ment.

But the most absurd piece of Liberal sham is their claim that PR 'will increase citizens' control over their elected repre- sentatives by abolishing safe seats'. In fact PR has the opposite effect. It loosens the bond between the elected and the electors, by putting candidates on 'party lists': their place in Parliament is then awarded not directly by their constituents, but through the patronage of their party managers.

A political oligarchy is created in which there are not just safe seats but safe careers. And with governments themselves being constructed out of that political class behind closed doors, the voters are doubly cut off from the people who govern them.

The supporters of PR are so blinded by enthusiasm for all things 'European' that they never consider what it is that other Europeans admire about our political sys- tem. The unique merit of our system is that it has a government-in-Parliament, with ministers who appear regularly among their party colleagues and have to defend their policies there.

This is the British tradition of 'responsi- ble government': it involves party responsi- bility, Cabinet responsibility, and the direct responsibility of a government — as an identifiable set of people and policies — to the ordinary electors who can choose it or reject it.

All these things, and the culture of active political debate which goes with them, have evolved out of centuries of genuinely stable government. Nothing could be more unfair to the British people than to rob them of that inheritance.