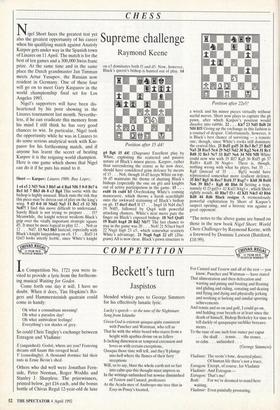 also the greatest opportunity of his career when his qualifying match against Anatoly Karpov gets under way in the Spanish town of Linares on 11 April. The match is for the best of ten games and a 300,000 Swiss franc prize. At the same time and in the same place the Dutch grandmaster Jan Timman meets Artur Yusupov, the Russian now resident in Germany. One of these four will go on to meet Gary Kasparov in the world championship final set for Los Angeles 1993.

Nigel's supporters will have been dis- heartened by his poor showing in the Linares tournament last month. Neverthe- less, if he can eradicate this memory from his mind I still think he has very good chances to win. In particular, Nigel took the opportunity while he was in Linares to do some serious analytical work with Kas- parov for his forthcoming match, and if anyone has learnt the secret of beating Karpov it is the reigning world champion. Here is one game which shows that Nigel can do it if he puts his mind to it.

*The notes to the above game are based on those in the new book Nigel Short: World Chess Challenger by Raymond Keene, with a foreword by Dominic Lawson (Batsford, £10.99).