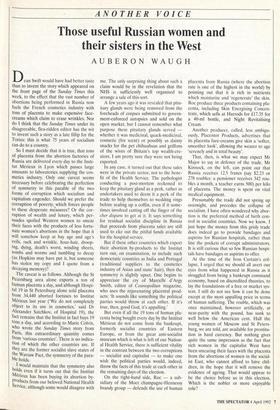 Those useful Russian women and their sisters in the West

AUBERON WAUGH Dcan Swift would have had better taste than to invent the story which appeared on the front page of the Sunday Times this week, to the effect that the vast number of

creams which claim to erase wrinkles. Nor do I think that the Sunday Times under its

disagreeable, flea-ridden editor has the wit to invent such a story as a late fillip for the Tories: this is what 75 years of socialism can do to a country.

So I must decide that it is true, that tons of placenta from the abortion factories of Russia are delivered every day to the Insti- tut Merieux in Lyon which passes large amounts to laboratories supplying the cos- metics industry. Only one caveat seems necessary before celebrating the perfection of symmetry in this parable of the two forms of corruption which socialism and capitalism engender. Should we prefer the corruption of poverty, which forces people to these desperate measures? Or the cor- ruption of wealth and luxury, which per- suades spoiled Western women to smear their faces with the products of less fortu- nate women's abortions in the hope that it will somehow keep at bay age and age's evils, ruck and wrinkle, hoar-hair, droop- ing, dying, death's worst, winding sheets, tombs and worms and tumbling to decay (as Hopkins may have put it, but someone has stolen my copy and I quote from a decaying memory)?

The caveat is as follows. Although the St Petersburg area alone exports a ton of human placenta a day, and although Hospi- tal 19 in St Petersburg alone sold placenta from 34,440 aborted foetuses to Institut Merieux last year ('We do not completely object to its use in cosmetics,' said Dr Alexander Satchkov, of Hospital 19), the fact remains that the Institut in fact buys 19 tons a day, and according to Marie Colvin, who wrote the Sunday Times story from Paris, this extraordinary quantity comes from `various countries'. There is no indica- tion of which the other countries are. If they are the former socialist slave states of the Warsaw Pact, the symmetry of the para- ble holds.

I would maintain that the symmetry also holds even if it turns out that the Institut Ma rieux has been buying its abortion by- products from our beloved National Health Service, although some would disagree with me. The only surprising thing about such a claim would be in the revelation that the NHS is sufficiently well organised to arrange a sale of this sort.

A few years ago it was revealed that pitu- itary glands were being removed from the foreheads of corpses submitted to govern- ment-enforced autopsies and sold on the open market, but I cannot remember what purpose these pituitary glands served whether it was medicinal, quack-medicinal, cosmetic (for scent) or possibly as dainty snacks for the pet chihuahuas and griffons of the wives of Britain's top wealth-cre- ators. I am pretty sure they were not being exported.

In any case, it turned out that these sales were in the private sector, not to the bene- fit of the Health Service. The pathologist conducting a post-mortem reckoned to keep the pituitary gland as a perk, rather as undertakers used to deem it a perk of the trade to help themselves to wedding rings before sealing up a coffin, even if it some- times involved cutting off the finger of the cher disparu to get at it. It says something for residual socialist discipline in Russia that proceeds from placenta sales are still used to eke out the pitiful funds available for the hospital service.

But if these other countries which export their abortion by-products to the Institut turn out, on examination, to include such democratic countries as India and Portugal (traditional suppliers to the cosmetics industry of Asian and nuns' hair), then the symmetry is slightly upset. One begins to appreciate the cry of Marcelle d'Argy Smith, editor of Cosmopolitan magazine, who uses the rejuvenating placental prod- ucts: `It sounds like something the political parties would throw at each other. If it's true, then, good God, it's appalling.'

But even if all the 19 tons of human pla- centa being bought every day by the Institut Merieux do not come from the bankrupt, formerly socialist countries of Eastern Europe, or from the great anti-socialist museum which is what is left of our Nation- al Health Service, there is sufficient vitality in the contrast between the two corruptions

— socialist and capitalist — to make one wish the political parties would, indeed, throw the facts of this trade at each other in the remaining days of the election.

On the right-hand side, Roc — a sub- sidiary of the Moet champagne-Hennessy brandy group — defends the use of human placenta from Russia (where the abortion rate is one of the highest in the world) by pointing out that it is rich in nutrients which moisturise and `regenerate' the skin. Roc produce three products containing pla- centa, including Skin Energising Concen- trate, which sells at Harrods for £17.35 for a 40-m1 bottle, and Night Revitalising Cream.

Another producer, called, less ambigu- ously, Placentor Products, advertises that its placenta face-creams give skin a `softer, smoother look', allowing the wearer to age `serenely and in total beauty'.

That, then, is what we may expect Mr Major to say in defence of the trade. Mr Kinnock, on the left, can point out that Russia receives 12.5 francs (say $2.23 or 278 roubles: a pensioner receives 342 rou- bles a month, a teacher earns 500) per kilo of placenta. The money is spent on vital medical equipment.

Presumably the trade did not spring up overnight, and precedes the collapse of socialism. I have often wondered why abor- tion is the preferred method of birth con- trol in socialist countries. Now we know. I just hope the money from this grisly trade does indeed go to provide bandages and aspirins for Russian hospitals, rather than line the pockets of corrupt administrators. It is still curious that so few Russian hospi- tals have bandages or aspirins to offer.

At the time of the Iron Curtain's col- lapse, I urged that we should all avert our eyes from what happened in Russia as it struggled from being a bankrupt command economy, based on discredited theories, to lay the foundations of a free or market sys- tem. I still do not see how it can be done except at the most appalling price in terms of human suffering. The rouble, which was once maintained, however artificially, at near-parity with the pound, has sunk to well below the American cent. Half the young women of MDscow and St Peters- burg, we are told, are available for prostitu- tion in hard currency. But nothing gives quite the same impression as the fact that rich women in the capitalist West have been smearing their faces with the placenta from the abortions of women in the social- ist East, who cannot afford to have chil- dren, in the hope that it will remove the evidence of ageing. That would appear to be the choice before us in this election. Which is the nobler or more enjoyable role?