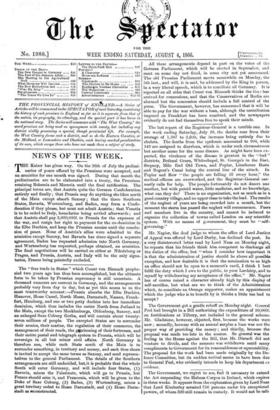 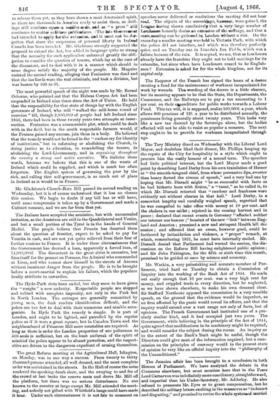 The Government, we regret to see, feel it necessary to

extend the Act suspending the Habeas Corpus in Ireland, which expires in three weeks. It appears from the explanation given by LorolNaas i that Lord Kimberley arrested 756 persons under his exceptional powers, of whom 320 still remain in custody. It would not be safe

to release them yet, as they have shown a most determined spirit, as there are thousands in America ready to assist them, as drill- ings still contistemeopowea sailleewesie, .atid as "a press"

continues to scatter seatimas petblientions. IThebite Crowernamewt had intended to miply lorsthe. extension, wild it, mist nee beefor- gotten that since the suspension of personal liberty in Irehowl Canada has been invaded. Mr. Gladstone strongly supported the proposal to extend the Act, but added in language quite as stroeg that the necessity for such application enhanced greatly the obli- gation to consider the question of tenure, which lay at the root of the discontent, and to deal with it in a manner which should in some degree satisfy the majority of the people. Mr. Maguire resisted the second reading, alleging that Fenianism was dead and that the landlords were the real criminals, and took a division, but was beaten by 105th 31.