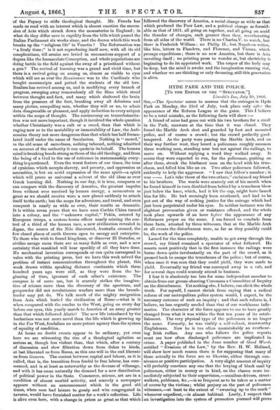 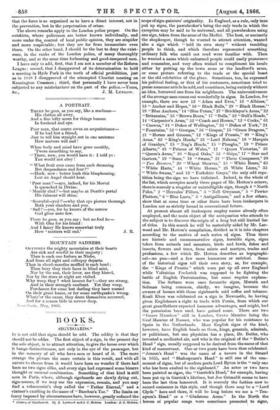 HYDE PARK AND THE POLICE.

Lincoln's Inn, July 30, 1866. Sin,—The Spectator seems to assume that the outrages in Ilyde Park on Monday, the 23rd of July, took place only after the appearance of the Reform League at the gates. This I believe to be a total mistake, as the following facts will show :— A friend of mine had gone out with his two brothers for a stroll in the Park, unaware at the time that it was closed. They found the Marble Arch shut and guarded by foot and mounted police, and of course a crowd ; but the crowd perfectly good- tempered. As the party were passing the Marble Arch, and on their way further west, they heard a policeman roughly summon three working men, standing near but not against the railings, to move on. Without replying a word they walked away. It seems they were expected to run, for the policeman, pushing on after them, struck the hindmost man on the head with his trun- cheon, and felled him like an ox. Two other policemen followed, evidently to help the aggressor. "I saw that fellow's number ; it was —. Let's take those of the two others," exclaimed my friend to his brothers. The words were scarcely out of his mouth when he found himself in turn disabled from behind by a truncheon blow just below the knee, which, had it hit the cap, might have lamed him for life. He had seemingly been overheard, and had to be put out of the way of seeking justice for the outrage which had just been perpetrated under his eyes. In neither instance was the slightest provocation given or resistance offered, and the whole took place upwards of an hour before the appearance of any Reformers proper on the scene. I am forced to conclude from these facts, attested by three witnesses, that at the Marble Arch at all events the disturbances were, as far as they possibly could be, the work of the police.

Lamed for the time completely, unable to get away through the crowd, my friend remained a spectator of what followed. He asserts most positively that in the first instance the railings were borne down quite involuntarily on the part of the crowd, as it pressed back to escape the truncheons of the police ; but of course, when once it was seen that they could yield, they were made to yield. Eventually my friend was conveyed away in a cab, and for several days could scarcely attend to business.

I fear it is absolutely too late for some independent member to obtain from our grouse-shooting Commons a Committee of Inquiry on the disturbances. Yet nothing else, I believe, can elicit the whole truth. For myself, I cannot shrink from saying that a radical reform of our metropolitan police system would, I expect, be the necessary outcome of such an inquiry ; and that such reform is, I believe, no less urgently needed than that of our workhouse infir- maries. The character of the force appears to me to have greatly changed from what it was within the first ten years of its estab- lishment. The very physical type of the policeman is no longer the same. Formerly, he was visibly a self-reliant, trustworthy Englishman. Now he is too often unmistakably an overbear- ing Irish ruffian. Any one who follows the police reports must see how often discharged policemen are implicated in crime. A paper published in the June number of Good Words entitled "Evasions of the Law," by the Rev. H. W. Holland, will show how much reason there is for supposing that many of those actually in the force are so likewise, either through con- nivance or positive participation. A very alight amount of inquiry will probably convince any one that the levying of black mail by policemen, either in money or in kind, on the classes more im- mediately subjected to their supervision,—omnibus-drivers, street- walkers, publicans, &c.,—is so frequent as to be taken as a matter of course by the victims ; whilst perjury on the part of policemen witnesses,—at least to the extent of "swearing up to the mark" whenever expedient,—is almost habitual. Lastly, I suspect that an investigation into the system of promotion pursued will prove that the force is so organized as to have a direct interest, not in the prevention, but in the perpetuation of crime.

The above remarks apply to the London police proper. On the outskirts, where policemen are better known individually, and more under the control of local public opinion, they are stupider and more respectable; but they are far from immaculate even there. On the other hand, I should be the last to deny the exist- ence, in the ranks of the London police, of many thoroughly worthy, and at the same time forbearing and good-tempered men.

I have only to add, first, that I am not a member of the Reform League ; second, that I disapproved of its determination to hold a meeting in Hyde Park in the teeth of official prohibition, just as in 1848 I disapproved of the attempted Chartist meeting on Kennington Common ; third, that personally I have never been subjected to any misbehaviour on the part of the police.—Yours, J. M. LUDLOW.