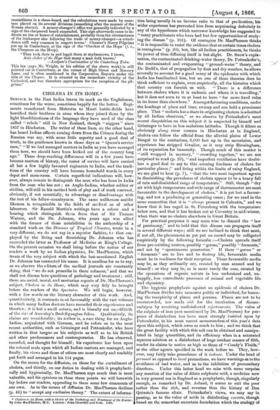 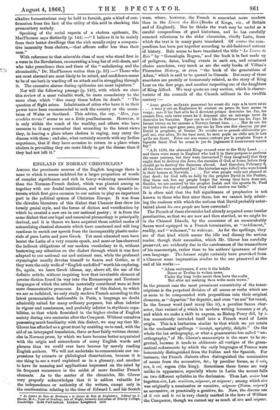 CHOLERA IN ITS HOME.*

SERVICE in the East Indies leaves its mark on the Englishman, sometimes for the worse, sometimes happily for the better. Regi- ments transferred from Mahratta to Maori battle-fields have horrified their brethren in arms whom they joined there by the light bloodthirstiness of the language they have used of the class called " rebels " still in New Zealand, though " niggers " since 1857 in Hindostan. The writer of these lines, on the other hand, has heard Indian officers coining down from the Crimea during the Russian war say, with some little asperity and a good deal of truth, to the gentlemen known in those days as "Queen's service men," "If we had managed matters in India as you have managed them here, we should have been kicked out of the country long ago." These deep-reaching differences will in a few years have become matters of history, the roster of service will have carried all but a few highly favoured regiments to India, and the tradi- tions of the country will have become household words in every depot and mess-room. Certain superficial indications will, how- ever, always remain to distinguish the man who has been in India from the man who has not ; an -Anglo-Indian, whether soldier or civilian, will still in his method both of play and of work contrast, obviously, if not essentially, to advantage or disadvantage with the rest of his fellow-countrymen. The same unlikeness amidst likeness is recognizable in the fields of medical as of other labourers. Sir Ranald Martin's writings have a colour and a bearing which distinguish them from that of Sir Thomas Watson, and the Dr. Johnson, who years ago was allied with the former of these notabilities in the authorship of a standard work on the Diseases of Tropical Climates, wrote in a very different, we do not say in a superior fashion, t3 that em- ployed by the living and flourishing Dr. Johnson who has succeeded the latter as Professor of Medicine at King's College. On the present occasion we shall bring before the notice of our readers a work by an Indian physician, Dr. MacPherson, which treats of the very subject with which the last-mentioned English Dr. Johnson has connected his name. It is needless for us to say, as we observe the editors of the medical journals are constantly doing, that "we do not prescribe in these columns," and that we shall not discuss here questions of pathology and treatment ; still, there are social, moral, and sanitarian aspects of Dr. MacPherson's subject, Cholera in its Home, which may very fitly be brought before the readers of the Spectator. We will begin, however, with a few words on the literary character of this work. And, quantitatively, it contrasts rinst favourably with the vast volumes in which many Indian doctors have recorded their experiences and theories ; it is but a small octavo, and is literally not one-fiftieth of the size of Anne,sley's Brobdignagian folios. Qualitatively, its claims are coaaiderable ; its author is, a rare thing for an Anglo- Indian, acquainted with German, and he refers us to the most recent authorities, such as Griesinger and Pettenkofer, who have written in that tongue on his subjects as well as to his British and other predeeesssors and contemporaries. He has observed, recorded, and thought for himself; his experience has been upon the colossal scale upon which all Indian matters are managed, and finally, his views and those of others are most clearly and readably put forth and arranged in his 154 pages.

On the means for the diffusion, on those for the curtailment of cholera, and thirdly, on our duties in dealing with it prophylacti- cally and hygienically, Dr. MacPherson says much that is most valuable, and his opinions on these three points we will herewith lay before our readers, appending to them some few comments of our own. As to the means of diffusion Dr. MacPherson declines (p. 46) to "accept any exclusive theory." The extent of informa-

tion being usually in an inverse ratio to that of predication, his wider experience has prevented him from acquiescing definitely in any of the hypotheses which narrower knowledge has suggested to "many practitioners who have had but few opportunities of study- ing the disease" (p. 101). Of contagion Dr. MacPherson thinks "it is impossible to resist the evidence that at certain times cholera is contagious" (p. 20), but, like all Indian practitioners, he thinks its power of thus diffusing itself is but alight. Dr. Snow's expla- nation, the contaminated drinking-water theory, Dr. Pettenkofer's, the contaminated and evaporating "ground-water" theory, and Dr. Budd's, that of propagation by dust and dry weather, he allows severally to account for a good many of the epidemics with which India has familiarized him, but no one of these theories does he think sufficient to explain, even empirically, all the histories which

that country can furnish us with. "There is a difference between cholera where it is endemic and where it is travelling," but it does not seem to us at least to have "far more fixed rules in its home than elsewhere." Amongst favouring conditions, under the headings of place and time, swamp and sun hold a prominent place. That "malaria has a share in originating cholera is admitted by all Indian observers," as we observe by Pettenkofer's most recent disquisition on this subject it is suspected by himself and Griesinger to have in less malarious latitudes. Though- it filters as obviously along river courses in Hindostan as in England, cholera can follow the official from the alluvial plains of Lower Bengal to the sanitarium, 6,000 feet up in the mountains, and experience has stripped Gwalior, as it may strip Birmingham, of its reputation for immunity. Though much of this matter is "stilt wrapped in mystery," "crowding together," we are not surprised to read (p. 23), "and imperfect ventilation have doubt- less a good deal to say to this seeming fondness of cholera for particular places ;" and living within the limits of rainy England, we are glad to hear (p. 7), "that the two most important agents in diminishing the prevalence of cholera appear to be a heavy fall of rain and diminished range of temperature." Still, though "dry air with high temperature and wide range of thermometer are most favourable to the development of cholera," it is yet but a favour- ing, and not a producing or generating cause ; for we read in the same connection that it is "always present in Calcutta," and we know that it has raged in St. Petersburg with the temperature below zero, and that it has broken out at Coventry in mid-winter, when there was no cholera elsewhere in Great Britain.

For practical purposes it may seem wise to discard the "law of parsimony," and to hold that this disease can propagate itself in several different ways ; still we are inclined to think that most, if not all, the phenomena as yet put on record may be colligated empirically by the following formulm ;—Cholera spreads itself from pre-existing sources, possibly "germs," possibly "ferments," and not by "spontaneous generation." If these ," germs" or " ferments " are to live and to destroy life, favourable media must be in readiness for their reception. These favourable media may be, as they ordinarily are, created by man around and by himself ; or they may be, as is more rarely the case, created by the operations of organic nature in less understood and, un- happily, less controllable processes of animal and vegetable life and chymistry.

The hygienic prophylaxis against an epidemic of cholera Dr. MacPherson divides into measures public or individual, for lessen- ing the receptivity of places and persons. Places are not to be overcrowded, nor made uidi for the incubation of disease- embryos by receiving uudisinfected rejectamenta. The value of the sulphate of iron (not mentioned by Dr. MacPherson) for pur- poses of disinfection has been most strongly insisted upon by Pettenkofer, in his most recent memorandum of this year's date upon this subject, which owes so much to him ; and we think that the great facility with which this salt can be obtained and manipu- lated in large quantities, and its efficiency when in a saturated aqueous solution as a disinfectant of huge outdoor masses of filth, render its claims to notice as high as those of " Condy's Fluids," or the other agents specified in the work before 1113. They, how- ever, may fairly take precedence of it indoors. Under the head of personal as opposed to local precautions, we have warnings as to the avoidance of bad water, and as to the inhibition of premonitory diarrhcea. Under this latter head we miss with some surprise any mention of the value of dilute sulphuric acid, a medicine now in very general use in England as a prophylatic, though, singularly enough, as remarked by Dr. /Wand, it seems to suit the poor rather than the rich, and reverses thus the history of Don Quixote's famous elixir. Pettenkofer's views, we may say in passing, as to the value of acids in disinfecting excreta, though based on the somewhat uncertain foundation which the analogy of

alkaline fermentations may be held to furnish, gain a kind of con- firmation from the fact of the utility of this acid in checking this premonitory malady.

Speaking of the social aspects of a cholera epidemic, Dr. MacPherson says distinctly (p. 144) :—" I believe it to be mainly from their better dwellings that the rich usually enjoy a compara- tive immunity from cholera,—that officers suffer less than their men."

With reference to that miserable class of men who stand first in a verse in the Revelations, enumerating a long list of evil-doers, and who take precedence then and there of the "unbelieving and the abominable," Dr. MacPherson writes thus (p. 33) :—" Those who are most alarmed are most likely to be seized, and confidence seems to be of use both in warding off an attack and in struggling through it. The excessive alarms during epidemics are most injurious."

Nor will the following passage (p. 148), with which we close this review of a most valuable work, be more consolatory to the same class, which "dies many times before its death." "The question of flight arises. Inhabitants of cities who have it in their power have been recommended to seek the country or the moun- tains of Wales or Scotland. • This advice, the cry, ' Heu, loge crudeles terras r seems to me a little pusillanimous. However, it is only within the reach of the wealthy, and others who have recourse to it may remember that according to the latest views they, in leaving a place where cholera is raging, may carry the disease with them ; and also, what certainly accords with my Indian experience, that if they have occasion to return to a place where cholera is prevailing they are more likely to get the disease than if they had not left it."