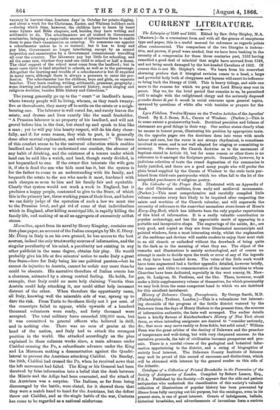 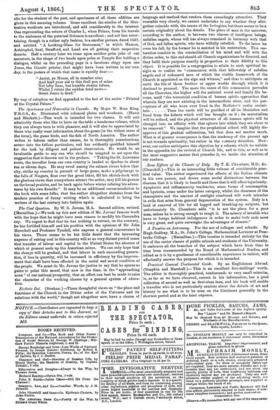 Page 20, 4 August 1866 — Catalogue of a Collection of Printed Broadsides in the Possession
Close

Catalogue of a Collection of Printed Broadsides in the Possession

cf the Society of Antiquaries of London. Compiled by Robert Lemon, Esq., F.S.A. Published by the Society.—It appears that the able and patient antiquarian who undertook the classification of this society's valuable collection of illustrations of popular history has been prevented by illness from fully carrying out his purpose, but the catalogue, even in its present state, is one of great interest. Grants of indulgences, ballads, historical broadsides, and advertisements of inventions form a curious olio for the student of the past, and specimens of all these oddities are given in this amusing volume. Some excellent fac-similes of the illus- trative woodcuts are introduced, and add considerably to the interest One representing the return of Charles L, when Prince, from his travels to the embraoes of the paternal Solomon is excellent ; and not less enter- taining, though in a rather ugly fashion, is a smaller picture, dated 1648, and entitled "A Looking-Glass for Statesmen," in which Haman, Achitophel, Saul, Strafford, and Land are all getting their respective deserts. Half a century later we come upon another grim joke of our ancestors, in the shape of two heads upon poles at Temple Bar holding a dialogue, whilst on the preceding page is a facetious elegy upon one Jones, the Gazette printer, that might have been written in our own day, to the jesters of which that name is equally dear :—

,t Assist ye Muses, all in number nine, And lend your aid to this frail pen of mine. Not lofty lines, but humble strains infuse, Whilst I relate the sudden fatal news— Great Jones is dead."

By way of colophon we find appended to the last of the series "Printed at the Crystal Palace."