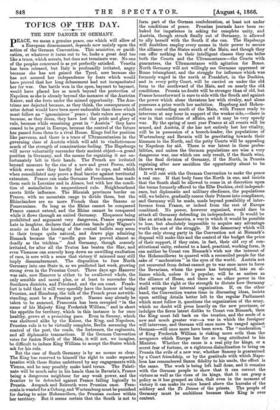 THE NEW DANGER IN GERMANY.

PEACE, we mean a genuine peace, one which will allow of a European disarmament, depends now mainly upon the action of the German Convention. This armistice, or pacifi- cation, or whatever it turns out to be, looks a great deal too like a truce, which arrests, but does not terminate war. No one of the peoples concerned is as yet perfectly satisfied. Venetia has been released, but Italy is profoundly irritated, angry because she has not gained the Tyrol, sore because she has not assured her independence by feats which would have proved that her long debasement had not incapacitated her for war. One battle won in the open, bayonet to bayonet, would have placed her as much beyond the protection of Napoleon as she is already beyond the menaces of the Austrian Kaiser, and she frets under the missed opportunity. The Aus- trians are dejected because, as they think, the consequences of utter defeat would have been more endurable than those which must follow an " ignominious " peace ; their rulers are savage because, as they deem, they have lost the pride and glory of rule, because while remaining great in " Austria " they have ceased to be great in Europe, because the control of the future has passed from them to a rival House. Kings feel for position like parvenus, and there is a trace of Ultramontanism in the governing class of Austria which will add to vindictiveness much of the strength of conscientious feeling. The Hapsburgs will never voluntarily surrender their ancient object—a grand position in Germany, and the means for regaining it are un- fortunately left in their hands. The French are irritated beyond measure by the rise of a new and great Power, with which even now they hardly feel able to cope, and which when consolidated may prove a final barrier against territorial extension. France can make Germans Frenchmen, has made them such in Lorraine and in Alsace, but with her the condi- tion of assimilation is unquestioned rule. Neighbourhood exerts little influence. The Rhenish provinces border on France, with no mountain range to divide them, but the Rhinelanders are no more French than the Saxons or Pomeranians. So long as the Rhine cannot be conquered France cannot extend, and the Rhine cannot be conquered while it flows through an united Germany. Eloquence being prohibited and argument very dangerous, France expresses hate in laughter, declares that Austrian bands play Wagner's music so that the hissing of the conical bullets may seem to their troops quite natural, and draws pigs admiring Bismark because the "needle gun has proved almost as deadly as the trichina." And Germany, though scarcely irritated, for after all the Teuton has beaten the Slav, and even Viennese can scarcely keep down an unwilling exultation of race, is sore with a sense that victory if misused may still imply dismemberment. The disposition to fuse North Germany into one State is, as we predicted last week, growing strong even in the Prussian Court. Three days ago Hanover was safe, now Hanover is either. to be swallowed whole, the only sensible and moral plan, or at least to surrender the Southern districts, and Friesland, and the sea coast. Frank- fort is told that it will very speedily have the honour of being Prussian, and Hamburg, the talk of the French press notwith- standing, must he a Prussian port. Nassau may already be taken to be annexed, Franconia has been occupied "in the name of his Majesty King Frederick William," and in short the appetite for territory, which in this instance is for once healthy, grows at a promising pace. Even in Saxony, which was sheltered alike by the Kaiser, the King, and Napoleon, Prussian rule is to be virtually complete, Berlin assuming the control of the post, the roads, the fortresses, the regiments, and all diplomatic transactions. If the German Convention votes for fusion North of the Main, it will not, we imagine, be difficult to induce King William to accept the States which ask for his rule.

But the case of South Germany is by no means so clear. The King has reserved to himself the right to make separate treaties with these States unfettered by any engagements with Vienna, and he may possibly make hard terms. The Palati- nate will be much safer in his hands than in Bavaria's, France being a dangerous neighbour for any weak power, and the frontier to be defended against France falling logically to Prussia. Anspach and Baireuth were Prussian once. Fran- conia is wanted for a Coburg, and Wurtemburg must be punished for daring to seize Hohenzollern, the Prussian enclave within her territory. But it seems certain that the South is not to form part of the German confederation at least not under the conditions of peace. Prussian journals have been re- buked for impatience in asking for complete unity, and Austria, though struck finally out of Germany, is allowed to ally herself with the South if she can. The Hapsburgs will doubtless employ every means in their power to secure the alliance of the States south of the Main, and though they can offer nothing to their intelligent classes they can bribe both the Courts and the Ultramontanes—the Courts with guarantees, the Ultramontanes with agitation for Rome. North Germany will not willingly see Germans oppressed or Rome triumphant, and the struggle for influence which was formerly waged in the north at Frankfort, in the Duchies, and in every petty Court, will be carried on under the old form to the southward of the Main, and on nearly the old, conditions. Prussia no doubt will be stronger than of old, but France henceforward is sure to side with the South and against the power which alone threatens her with rivalry, and alone possesses a prize worth her ambition. Hapsburg and Hohen- zollern contending south of the Main, with France ready to. intervene at any hour in support of the weaker side,—there is war in that condition of affairs, and it may be very speedy war. By the spring of next year France at all events will be armed, and Austria, if she has not entirely lost her vitality, will be in possession of a breech-loader, the populations of Wurtemburg and Bavaria will be gravitating towards their kinsmen in the North, and the petty Courts will be appealing to Napoleon for aid. There is war latent in these proba- bilities, and unless the German populations are wise a very dangerous war, one which can only result, if the South wins, in the final division of Germany, if the North, in Prussia- regaining after new sacrifices the opportunity about to be thrown away.

It will rest with the German Convention to make the peace a real one. If that body fuses the North in one, and insists that the South shall be allowed to come in at discretion upon the terms formerly offered to the Elbe Duchies, civil independ- ence, but diplomatic and military obedience, the populations will, we believe, gradually coerce their Princes into compliance,. and Germany will be made, made beyond possibility of inter- ference from France, or indeed from the rest of Europe combined. No power, however organized, would dare to. attack all Germany defending its independence. It would be like an attack on America, a war in which it would be possible to lose, but absolutely impossible to acquire any advantage worth the cost of the struggle. If the democracy which will be the only strong party in the Convention not at Bismark's disposal will make this and the control of the budget the price of their support, if they raise, in fact, their old cry of con- stitutional unity, reduced to a hard, practical, working form, it can neither be Count von Bismark's wish nor the interest of the Hohenzollerns to quarrel with a reconciled people for the sake of "moderation" in the eyes of the world. Austria not yet recovered from defeat cannot go to war once more to force the Bavarians, whom the peace has betrayed, into an al- liance which, unless it is popular, will be as useless as the alliance of Hesse, and there is no other power in the world with the right or the strength to dictate how Germany shall arrange her internal organization. If, on the other hand, the Convention wastes time in discussing ideas, insists upon settling details better left to the regular Parliament which must follow it, questions the organization of the army, which no doubt will press heavily on the new provinces, or indulges the fierce latent dislike to Count von Bismark, then the King must fall back on the treaties, and the seeds of a. new and much greater war—a war in which the foreigner will intervene, and German will once more be ranged against German—will once more have been sown. The " moderation '" of King Frederick William is risking more evils than the arrogance which Europe has for so long attributed to his Minister. Whether the cause is a real pity for kings, or a secret fear of fortune, or a righteous disinclination to bring on Prussia the evils of a new war, whether Saxony is guaranteed by a Court friendship, or by the gratitude with which Napo- leon has remembered Saxon fidelity to his uncle, the effect is the same. The work is being left half done, and it remains with the German people to show that it can correct the virtues as well as the vices of its kings, that it can grasp a policy as it has grasped an idea, that even in the moment of victory it can make its voice heard above the hurrahs of the soldiery and the Te Deums of the priests. The people of Germany must be ambitious because their King is over content.