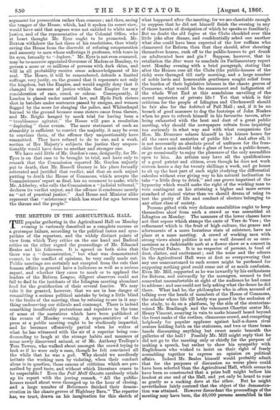 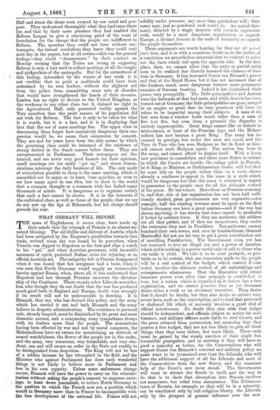 Page 6, 4 August 1866 — Tat MEETING IN THE AGRIOUL.WEAL RAIN, popular gathering in the
Close

Tat MEETING IN THE AGRIOUL.WEAL RAIN, popular gathering in the

evening is variously described as a complete success or a grotesque failure, according to the political tastes and sym- pathies of the reporters, and the widely distinct points of view from which Tory critics on the one hand and Radical critics on the other regard the proceedings of Mr. Edmond Beales and his followers. It is agreed on both sides that there was a "demonstration," but what was demonstrated cannot, in the conflict of opinions, be very easily made out. Public meetings are certainly not excepted from the rule that human affairs in general have a ludicrous as well as a serious aspect, and whether they came to mock or to applaud the leaders of the Reform League, diligent observers could not fall to rind in the incidents of the Islington meeting abundant food for the gratification of their several fancies. We may take it for granted, however, that we are in less danger of committing a serious political mistake by being a little blind to the faults of the meeting, than by refusing to see in it any- thing undeserving our ridicule and contempt. There is indeed something insufferably pretentious and repulsive in the tone of some of the narratives which have been published of the events of Monday evening. A representative of the press at a public meeting ought to be studiously impartial, and he becomes offensively partial when he writes of what he has witnessed with the air of a superior being con- descending to laugh at the strange habits and manners of some newly discovered animal, or of Mr. Anthony Trollope's Tom Towers, who walked about amongst the crowd trying to look as if he were only a man, though he felt convinced all the while that he was a god. Why should we needlessly irritate the working men by violating, when their conduct alone is in question, those canons of criticism which are pre- scribed by good 'taste, and without which literature ceases to be respectable ? Even the Pall Malt Gazette carelessly winds up its reptret with the jeering remark, "All the public- houses round about were thronged up to the hour of closing, and a large number of Reformers finished their demon- stration in the chaste groves of Highbury Barn." The reporter has, we trust, drawn on his imagination for this sketch of

what happened after the meeting, for we are charitable enough to suppose that he did not himself finish the -evening in any of those haunts of dissipation of which he speaks so familiarly. But no doubt the old fogies at the Clubs chuckled over this- little joke after dinner, and confidentially asked one another

what else could have been expected of the low ruffians who. clamoured for Reform than that they should, after shouting themselves hoarse, rash off to the public-houses to get drunk on adulterated beer and gin ? Suppose, however, that in retaliation the Star were to conclude its Parliamentary report next Monday evening with a brief paragraph, stating that after the Houses rose all the Clubs (the public-houses of the- rich) were thronged till early morning, and a large number of noble lords and honourable gentlemen sought relief from

the burden of their legislative labours in the chaste groves of Cremorne, what would be the amazement and indignation of the whole West End at this scandalous unveiling of the- sacred mysteries of private life ? Yet that which is fair- criticism for the people of Islington and Clerkenwell should

be fair also for the habitués of Pall Mall ; and, if it be no- breach of good manners to dog the footsteps of John Noakes.

whenhe goes to refresh himself in his favourite tavern, after being exhausted with the heat and dust of a great public- meeting, why should the newspapers refrain from inquiring too curiously in what way and with what companions the- Hon. Mr. Deuceace solaces himself in his leisure hours for all the cares and anxieties of public life ? And after all, it is not necessarily an absolute proof of unfitness for the fran- chise that a man should take a glass of beer in a public-house, or go occasionally to enjoy the pleasures of the only assemblies. open to him. An artizan may have all the qualifications.

of a good patriot and citizen, even though he does not work sixteen hours a day for twenty shillings a week, and go home to sit up the best part of each night studying the differential calculus without ever giving way to his natural inclination to- take " a little drop to drink," and one grows impatient of the hypocrisy which would make the right of the working man to vote contingent on his attaining a higher and more severe- standard of stoical virtue than we should dream of using to- test the purity of life and conduct of electors belonging to any other class of society.

Islington on Monday. The -manners of the lower classes have-

not that repose which stamps the caste of Vere de Vere ; the- refinement which is the fruit of high culture, the graces and adornments of a more luxurious state of existence, have no- place at a mass meeting. A crowd of working men with strong views about politics is not so well dressed or so cere- monious as a fashionable mob at a flower show or a concert in_ the Crystal Palace. It is no respecter of persons, is fond of dust, clatter, and excitement ; and the noise and the odours.

in the Agricultural Hall were at first so overpowering that any one unaccustomed to such scenes might be pardoned for supposing nothing good could come out of so much confusion.. Even Mr. Mill, supported as he was inwardly by his enthusiasm for Reform, and outwardly by the managers, seemed to fee/ somewhat uncomfortable at sight of the audience he had come- to address ; and one could not help asking what the deuce he did. there. What had he,the philosopher who is often accused of talking over the heads of members of the House of Commons, the scholar whose life till lately was passed in the seclusion of the study, to do on a platform, by the side of the stentorian- voiced Mr. Bradlaugh and the vehement Chartist orator Mr.. Henry Vincent, essaying in vain to make himself hewed beyond. the front ranks of the restless, clamorous crowd, and competing- helplessly for popular applause against half-a-dozen rival orators holding forth on the staircases, and two or three brass bands discoursing anything but sweet music beneath the galleries of the hail? Possibly Mr. 'Mill might reply that he- did not go to the meeting only or chiefly for the purpose of making a speech, bat rather to show his sympathy with Englishmen who wished to insist on their right of freely assembling together to express an opinion on political affairs. Indeed Mr. Beales himself would probably admit that for the purposes of discussion no worse place could have been selected Than the Agricultural Hall, which seems to have been so constructed that a prize bull might bellow his loudest at one end of the Hall, and yet only be heard to roar as gently as a slicking dove at the other. But he might

nevertheless fairly contend that the object of the demonstra- tion was attained. However discordant the proceedings of the meeting may have been, the 40,000 persons assembled in the hail and about the doors were swayed by one mind and pur- pose. They understood thoroughly what they had come there for, and that by their mere presence they had enabled the Reform League to give a convincing proof of the want of foundation for the charge that the people are indifferent to Reform. The speeches they could not hear without ear- trumpets, the formal resolutions they knew they could read next day in the papers, but at all events—this was the general feeling—they could " demonstrate " by their conduct on Monday evening that the Tories are wrong in supposing Reform is only a bait used to collect meetings of all the roughs and pickpockets of the metropolis. But for the earnestness of this feeling, intensified by the events of last week, it is not credible that so great a multitude could have been restrained by its own leaders, without the slightest aid from the police, from committing some acts of disorder that would have strengthened the hands of their enemies. London has no right to dictate to the United Kingdom, or the workmen to any other class, but it claimed no right in the Agricultural Hall, only protested visibly against the Tory assertion that the great masses of its population did not wish for Reform. The fact is only to be taken for what it is worth, but it is a fact, and it is in displaying that fact that the use of mass meetings lies. The upper class in denouncing them forget how excessively dangerous their sus- pension would be, we mean their suspension by consent. They are and for years have been the only means by which the governing class could be informed of the existence of strong desires in the dumb masses below them. They are unrepresented in Parliament. Their newspapers are dis- trusted, and are never very good funnels for their opinions, small meetings are too easily "got up," and street demon- strations interrupt the daily business of life. The only mode of articulation possible to them is the mass meeting, which is assembled not to argue or to learn from speeches, or even to see how many agree in one idea, but to show to the world that a common thought or a common wish has linked many thousands of minds. It is dangerous so to organize society that such a fact cannot be shown. It is in the interests of the cultivated class, as well as those of the people, that we say do not sew up the lips of Behemoth, lest his charge should precede his roar.