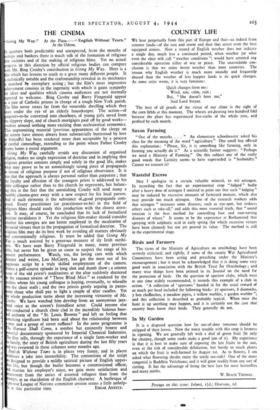 Going My Way." At the Plaza.—" English Without Tears." At the Odeon.

N quarters both predictable and unexpected, from the mouths of ishops and bankers there is much talk of the formation of religious Im societies and of the making of religious films. Yet no actual rogress in this direction by official religious bodies can compare ith Mr. Bing Crosby's contribution in Going My Way. Here is a Im which has lessons to teach to a great many different people. It technically notable and the craftsmanship revealed in its mechanics matched by exemplary acting ; but the film's most impressive hievement consists in the ingenuity with which it gains sympathy r ideas and qualities which cinema audiences are not normally xpected to welcome. Bing Crosby and Barry Fitzgerald appear a pair of Catholic priests in charge of a tough New York parish. to film never strays far from the venerable dwelling which they are under the eye of an elderly housekeeper. The action—of angsters-to-be converted into choirboys, of young girls saved from e slippery slope, and of church mortgages paid off by good works- olves around nothing more exciting than ecclesiastical economics. his unpromising material (previous appearances of the clergy on e screen have almost always been substantially buttressed by love fisticuffs) has been rendered more than acceptable by a process careful camouflage, extending to the point where Father Crosby oons home a moral argument.

Going My Way carefully avoids any discussion of organised eligion, makes no single expression of doctrine and in implying that eligious practice consists simply and solely in the good life, makes hat may prove to be an astonishingly strong piece of propaganda favour of religious purpose if not of religious observance. It is ue that the approach is always personal rather than corporate ; that e loyalty and affection of the youngest priest is addressed to his der colleague rather than to the church he represents, but balanc- g this is the fact that the astonishing Crosby will send many a umble cinema-goer away with a new respect for his local parson. nd of such elements is the substance of.good propaganda com- sed. Every practitioner (or practitioner-to-be) in the field of eligious films should study this production with the closest atten- on. It may, of course, be concluded that its lack of formalised octrine invalidates it Yet the religious film-maker should consider hether his energies are not better employed in the inculcation of social virtues than in the propagation of formalised doctrine. The eligious film may do its best work by avoiding all matters obviously d conventionally religious. It must be added that Going My ay is much assisted by a generous measure of sly Irish earthi- ss. We have seen Barry Fitzgerald in many, many previous es, but never has he given us cause to suspect the range of his resent performance. Watch, too, the loving care with which irector and writer, Leo McCarey, has got the most out of his genious script by a truly skilled employment of the camera. 'otice a golf-course episode in long shot and dumb show ; a solemn ene of the old priest's meditations at the altar suddenly shattered v the raucous strains of " Three Blind Mice " as rendered by the rchins whom his young colleague is hoping, eventually, to wheedle o the choir stalls ; and the two priests gently arguing in panto- me about who shall pay to light a couple of altar candles. Yet e whole production turns about the increasing virtuosity of Mr. osby. We have watched him develop from an anonymous jazz- and voice to the screen's friendliest actor. Could anyone else are conducted a church choir clad in the incredibly hideous base- ll uniform of the " St. Louis Browns " and left us feeling that meshing significant had been said about the relationship between man and a group of street ruffians? In the same programme is he Harvest Shall Come, a sombre but eminently honest and werful documentary sponsored by Imperial Chemical Industries. e film tells, through the experience of a single farm-worker and s family, the story of British agriculture during the last fifty years d was reviewed in these columns some months ago.

English Without Tears is in places very funny, and in places labours a joke into insensibility. The contortions of the script designed to provide a mildly satirical picture of English upper- s life, but though the butler becomes a commissioned officer, marries his employer's niece, we gain more satisfaction and usement from the antics of assorted refugees than from the mPts at an elucidation of the English character. A burlesque of Pre-war League of Nations committee session seems a little unhelp-