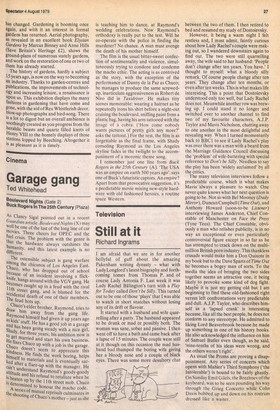 Boulevard Nights (Gate 2) Buck Rogers In The 25th Century (Plaza) As Clancy Sigal pointed out in a recent Guardian article. Boulevard Nights (X) m ay well be one of the last of the long line of car movies. Three cheers for OPEC and the fuel crisis i . The problem with the genre s that the hardware always outshines the humanity, and this latest example is no different.

The ostensible subject is gang warfare among the Chicanos of Los Angeles East. Chuco, who has dropped out of school because of an incident involving a flickknife, hangs around with the VGV gang. He becomes caught up in a feud with the rival 11th street gang, and is blamed for the accidental death of one of their members. The feud hots up. Chuco's elder brother, Raymond, tries to draw him away from the gang life. Raymond himself had given it up years ago as kids' stuff. He has a good job in a garage and has been going steady with a nice girl. Shady, for three years; his ambition now is to get married and start his own business. He fixes Chuco up with a job in the garage. Chuco doesn't seem to appreciate this londness. He finds the work boring, helps himself to materials and is eventually sacked‘ after a flare-up with the manager. He can. t understand Raymond's goody-goody attitude and his refusal to retaliate when he is beaten up by the 11th street mob. Chuco is determined to honour the macho code. A series of mutual reprisals culminates in the shooting of Chuco's mother — just as she is teaching him to dance, at Raymond's wedding celebrations. Now Raymond's orthodoxy is really put to the test. Will he co-operate with the police in finding the murderer? No chance. A man must avenge the death of his mother himself.

The film is the usual bitter-sweet confection of sentimentality and violence, simultaneously trying to condone and condemn the macho ethic. The acting is as contrived as the story, with the exception of the performance of Danny de la Paz as Chuco; he manages to produce the same screwedup, inarticulate aggressiveness as Robert de Niro did in Taxidriver. He makes tiny scenes memorable: wearing a hairnet as he repeatedly irons his shirt before a night-out cruising the boulevard, sniffing paint from a plastic bag, having his arm tattooed with the image of a cobra. ( 'How come nobody wants pictures of pretty girls any more?' asks the tattoist.) For the rest, the film is as forgettable as the final frame, with Shady consoling Raymond as the Los Angeles skyline fades in the twilight to the accompaniment of a moronic theme song.

I remember just one line from Buck Rogers in the 25th Century (A). 'The USA was an empire on earth 500 years ago', says one of Buck's futuristic captors. An empire? Apart from that provocative suggestion, it's a predictable movie mixing new-style hardware with old fashioned heroics, a routine space Western.