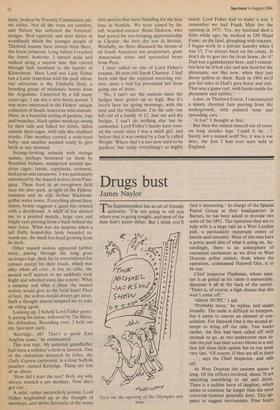 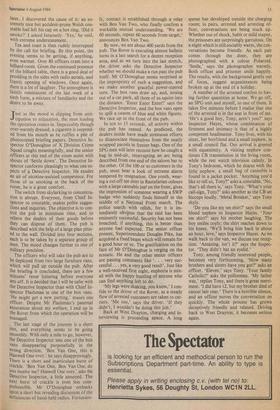 James Naylor The Superintendent has an air of friendly authority. 'I'm not going to tell you where you're going tonight, and most of the men don't know either. But I think you'll

'Give me the opening of the Olympics any time.' find it interesting.' In charge of the Special Patrol Group at their headquarters in Barnes, he has been asked to provide two units of the SPG. The operation they are to help with is a large raid on a West London pub, a particularly important centre of heroin and cannabis. Most of the men have a pretty good idea of what is going on. Ac- cordingly, there is an atmosphere of restrained excitement as we drive to West Drayton police station, from where the operation, codenamed Hanwell One, is to be run.

Chief Inspector Flashman, whose man- ner is as genial as his name is memorable, discusses it all at the back of the carrier. `There is, of course, a high chance that this won't come off.'

`Probably more,' he replies, and smiles broadly. The smile is difficult to interpret, but it seems to convey an element of con- solation. For Hanwell One is the second at- tempt to bring off the raid. Two weeks earlier, the first had been called off with seconds to go, as two undercover men in- side the pub had their covers blown in a way that left them little option but to run away very fast. 'Of course, if they are all in there . . .', says the Chief Inspector, and tails off.

At West Drayton the canteen queue is long. Of the officers involved, about 70 are snatching something to eat and drink. There is a sudden burst of laughter, which seems to continue far longer than the most convivial humour generally does. This ap- pears to suggest nervousness. Four hours

later, I discovered the cause of it: an ex- tremely nice but accident-prone Welsh con- stable had left his cap on a hot ring. 'Did it smoke?' I asked fatuously. 'Yes,' he said, with extreme understatement.

Tea and toast is then rudely interrupted by the call for briefing. By this point, the evening seems to be getting, if anything, even warmer. Over 80 officers cram into a billiard room. Given the continued presence of the billiard table, there is a good deal of prodding in the sides with radio aerials, and frantic opening of windows. Once again, there is a lot of laughter. The atmosphere is faintly reminiscent of the last week of a sixth form, a mixture of familiarity and the desire to be away.

Just as the mood is slipping from anti- cipation to relaxation, the man leading the operation comes in. Impeccably though over-warmly dressed, a cigarette is suspend- ed from his mouth as he ruffles a pile of photocopied briefing papers. Detective In- spector O'Donoghue of X Division Crime Squad coughs meaningfully, and the senior officers at this end of the room assist with shouts of 'Settle down'. The Detective In- spector conforms pleasingly to what one ex- pects of a Detective Inspector. He exudes an air of nicotine-assisted competence. For those of us smoking at the back of the room, he is a great comfort.

The switch from skylarking to concentra- tion is abrupt. Everyone, from Chief In- spector to constable, makes polite sugges- tions and inquiries. The objective is to con- trol the pub in minimum time, and to relieve the dealers of their goods before they can dispose of them. The pub is described with the help of a large plan pinn- ed to the wall. Divided into four sections, each is to be taken by a separate group of men. The mood changes further to one of Military precision.

The officers who will take the pub are to be deployed from two large furniture vans, which will pull up outside the pub. After the briefing is concluded, there are a few Minutes' tense loitering before everyone sets off. It is decided that I will be safer with the Detective Inspector than with Chief In- spector Flashman in one of the box vans. 'He might get a new parting,' muses one officer. Despite Mr Flashman's paternal assurances about my welfare, I end up in the Rover from which the operation will be managed.

The last stage of the journey is a short one, and everything seems to be going smoothly. With only a mile to go, however, the Detective Inspector sees one of the box vans disappearing purposefully in the wrong direction. 'Box Van One, this is Hanwell One over,' he says disapprovingly. There is a short and inarticulate burst of crackle. 'Box Van One, Box Van One, do You receive me? Hanwell One over,' asks the Detective Inspector, a little annoyed. The next burst of crackle is even less com- prehensible. Mr O'Donoghue embarks Upon a short but revealing discussion of the deficiencies of hand-held radios. Fortunate-

ly, contact is established through a relay with Box Van Two, who finally confirm a workable mutual understanding. 'We are 60 seconds, repeat 60 seconds from target,' announces Box Van Two.

By now, we are about 400 yards from the pub. The Rover is executing almost balletic turns in a last search for a decent reception area, and as we turn into the last stretch, the driver asks the Detective Inspector whether we should make a run past the pub itself. Mr O'Donoghue seems surprised at the impropriety of such a suggestion, and we make another graceful power-steered turn. The box vans draw up, and, nosing out of a car park, all three of us squint into the distance. 'Enter Enter Enter!' says the Detective Inspector, and the box vans open to spill a swarm of blue and white figures. We race up to the front of the pub.

In ten to 15 seconds, all activity within the pub has ceased. As predicted, the dealers inside have made strenuous efforts to disassociate themselves from the neatly wrapped parcels in freezer bags. One of the SPG men will later recount how he caught a bag in mid-air, interrupting an arc being described from one end of the saloon bar to the other. Of the 100 or so customers in the pub, most bear a look of extreme alarm tempered by resignation. One youth, wear- ing a cut-off tee shirt in Rastafarian colours with a large cannabis leaf on the front, gives the impression of someone wearing a SWP badge who suddenly finds himself in the middle of a National Front march. The police search with relish, for it is im- mediately obvious that the raid has been eminently successful. Security has not been breached; if anything, this is better than anyone had expected. The senior officer present, Superintendent Douglas Pike, has acquired a fixed beam which will remain for a good hour or so. The gratification on the face of Mr O'Donoghue is verging on the ecstatic. He and the other senior officers

are passing comments like . . very suc- cessful . . . yes, a very good result'. Just like a well-received first night, euphoria is mix- ed with the happy bustling of anyone who can find anything left to do.

'My legs were shaking, you know,' I con- fide to the driver of the Rover, as a steady flow of arrested customers are taken to car- riers. 'Me too,' says the driver. 'If they didn't, I wouldn't be doing this job.'

Back at West Drayton, charging and in- terviewing is proceeding apace. A long queue has developed outside the charging room; in pairs, arrested and arresting of- ficer, conversations are being stuck up. Whether out of shock, habit or mild stupor, the prisoners are surprisingly garrulous. On a night which is stilLsociably warm, the con- versations become friendly. As each pair comes through the door, they are photographed with a colour Polaroid. 'Smile,' says the photographer warmly. Both officer and prisoner smile happily. The results, with the background gently out of focus, suggest acquaintances being broken up at the end of a holiday.

A number of the arrested confess to hav- ing further quantities at home. We go off, an SPG unit and myself, to one of them. It takes five minutes before I realise that one of the arrested is in the seat in front of me. 'He's a good boy, Tony, aren't you?' says Inspector Hayes, whose combination of firmness and intimacy is that of a highly competent headmaster. Tony lives, with his sister, her boyfriend and a small nephew, in a small council flat. Our arrival is greeted with equanimity. A visiting nephew con- tinues CB transmission in the living room, while the rest watch television calmly. In Tony's bedroom, which he shares with the little nephew, a small bag of cannabis is found in a jacket pocket. 'Anything you'd like to tell us, Tony?' asks a constable. `No, that's all there is,' says Tony. 'What's your call-sign, Tony?' asks another as the CB set hiccups loudly. 'Metal Breaker,' says Tony shyly.

`Do you like my tee shirt?' says the small blond nephew to Inspector Hayes. Your tee shirt?' says his mother laughing. The boy smiles coyly; the shirt reaches down to his knees. 'We'll bring him back in about an hour, love,' says Inspector Hayes. As we walk back to the van, we discuss our recep- tion. 'Amazing, isn't it?' says the Inspec- tor. 'They didn't bat an eyelid.'

Tony, among friendly interested people, becomes very forthcoming. 'How many brothers and sisters have you got?' asks an officer. 'Eleven,' says Tony. 'Your family Catholic?' asks the policeman. 'My father was,' replies Tony, and there is great merri- ment. 'I did have 12, but my brother died of cancer last year.' There is a horrible silence, and an officer moves the conversation on quickly. The whole process has grown deceptively friendly and relaxed. Driving back to West Drayton, it becomes serious again.