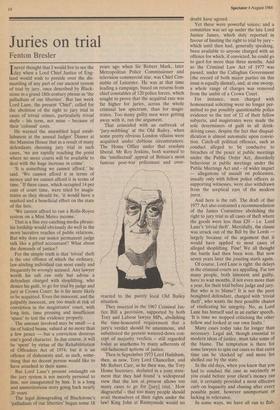 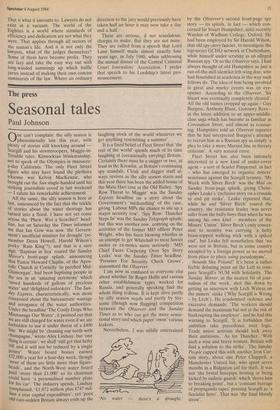 mantling of any part of our ancient system of trial by jury, once described by Black- stone in a grand 18th-century phrase as 'the palladium of our liberties'. But last week Lord Lane, the present 'Chief , called for the abolition of the right to jury trial in

cases of trivial crimes, particularly trivial thefts – his term, not mine – because of their 'colossal' costs.

He warned the assembled legal estab- lishment at the annual Judges' Dinner at the Mansion House that as a result of many defendants choosing jury trial in such cases, 'we are rapidly reaching the point where no more courts will be available to deal with the huge increase in crime'.

'We cannot afford to run a Rolls-Royce system on a Mini Metro income.'

That is a fine eye-catching media phrase: his lordship would obviously do well in the more lucrative reaches of public relations. But why does our senior permanent judge talk like a gifted accountant? What about the demands of justice?

For the simple truth is that 'trivial' theft is the one offence of which the ordinary, law-abiding individual can most easily and

frequently be wrongly accused. Any lawyer worth his salt can only but advise a

defendant charged with shoplifting, who denies his guilt, to go for trial by judge and jury at Crown Court: he is far more likely to be acquitted. Even the innocent, and the palpably innocent, are too much at risk of conviction in the magistrates' court, with long lists, time pressing and insufficient 'space' to test the evidence properly.

The amount involved may be small — a tin of baked beans, valued at no more than a few pence — but a conviction destroys one's good character. In due course, it will be 'spent' by virtue of the Rehabilitiation of Offenders Act of 1974; but it is an offence of dishonesty and, as such, some- thing that no decent person would like to have attached to their name.

But Lord Lane's present onslaught on the jury system is not merely personal to him, nor inaugurated by him. It is a long and unmeritorious story going back nearly 20 years.

The legal downgrading of Blackstone's 'palladium of our liberties' began some 18 years ago when Sir Robert Mark, later Metropolitan Police Commissioner and television commercial star, was Chief Con- stable of Leicester. He was at that time leading a campaign, based on returns from chief constables of 120 police forces, which sought to prove that the acquittal rate was far higher for juries, across the whole criminal law spectrum, than for magis- trates. Too many guilty men were getting away with it, ran the argument.

That coincided with an outbreak of 'jury-nobbling' at the Old Bailey, when some pretty obvious London villains were acquitted under dubious circumstances. The Home Office under that resolute liberal, Mr Roy Jenkins, both warmed to the 'intellectual' appeal of Britain's most famous post-war policeman and over- reacted to the purely local Old Bailey situation.

They inserted in the 1967 Criminal Jus- tice Bill a provision, supported by both Tory and Labour lawyer MPs, abolishing the time-honoured requirement that a jury's verdict should be unanimous, and substituted the present watered-down con- cept of majority verdicts – still regarded today as anathema by many adherents of old-fashioned notions of justice.

Then in September 1973 Lord Hailsham, then, as now, Tory Lord Chancellor, and Mr Robert Carr, as he then was, the Tory Home Secretary, declared in a joint state- ment that they had found 'a widespread view that the law at present allows too many cases to go for [jury] trial.' How disgraceful – that too many people should avail themselves of their rights under the law! King John at Runnymede would no doubt have agreed.

Yet these were powerful voices; and a committee was set up under the late Lord Justice James, which duly reported in favour of limiting the right to trial by jury which until then had, generally speaking, been available to anyone charged with an offence for which, if convicted, he could go to gaol for more than three months. And so the Criminal Law Act of 1977 was passed, under the Callaghan Government (the record of both major parties on this issue is equally dismal), and, at one swoop, a whole range of charges was removed from the ambit of a Crown Court.

For instance, men charged with homosexual soliciting were no longer per- mitted to put possibly questionable police evidence to the test of 12 of their fellow subjects, and magistrates were made the sole determiners of guilt in all drink- driving cases, despite the fact that disqual- ification is almost automatic upon convic- tion. Catch-all political offences, such as conduct alleged to be conducive to breaches of the peace at public meetings under the Public Order Act, disorderly behaviour at public meetings under the Public Meetings Act and – of wider impact — allegations of assault on policemen, usually only with fellow police officers as supporting witnesses, were also withdrawn from the sceptical ears of the modern juror.

And here is the rub. The draft of that 1977 Act also contained a recommendation of the James Committee abolishing the right to jury trial in all cases of theft where the goods were less than £20 – i.e. Lord Lane's 'trivial theft'. Mercifully, the clause was struck out of the Bill by the Lords largely because of the argument that it would have applied to most cases of alleged shoplifting. Fine! We all thought the battle had then been won. But now seven years later the jousting starts again.

Of course, Lord Lane is right: the delays in the criminal courts are appalling. Far too many people, both innocent and guilty, have to wait months, if not even more than a year, for their trial before judge and jury.

But who is to blame? It is not the poor benighted defendant, charged with 'trivial theft', who wants the best possible chance of vindicating his integrity. No, as Lord Lane has himself said in an earlier speech, 'It is time we stopped criticising the other fellow and looked at our own faults.'

Many cases today take far longer than necessary. Legal aid, though essential to modern ideas of justice, must take some of the blame. The temptation is there for some lawyers to spin out cases so that extra time can be 'clocked up' and more fee shelled out by the state.

In the old days, when you knew that you had to conduct the case as succinctly as you could before your client's money ran out, it certainly provided a most effective curb on loquacity and chasing after every possible point, however unimportant or lacking in relevance.

In some ways, we have all run to flab• That is what it amounts to. Lawyers do not exist in a vacuum. The world of the Eighties is a world where standards of efficiency and dedication are not what they were. That applies through all sectors of the nation's life. And it is not only the lawyers, what of the judges themselves? Some of them have become prolix. They are lazy and take the easy way out with long-winded summings up which baffle juries instead of making their own concise summaries of the law. Where an ordinary direction to the jury would previously have taken half an hour it may now take a day and a half.

These are serious, if not scandalous, charges to make. But they are not mine. They are culled from a speech that Lord Lane himself made almost exactly four years ago, in July 1980, when addressing the annual dinner of the Central Criminal Court Journalists' Association. I prefer that speech to his Lordship's latest pro- nouncement.