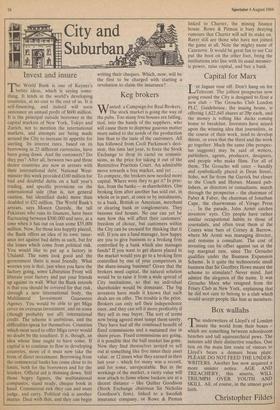 Wanted: a Campaign for Real Brokers. The stock market is going the way of the pubs. Too many free houses are falling, tied, into the hands of the suppliers, who will cause them to dispense gaseous matter more suited to the needs of the production line than to the taste of the customers. All has followed from Cecil Parkinson's deci- sion, this time last year, to force the Stock Exchange to drop its cartel on commis- sions, as the price for taking it out of the Restrictive Practices Court. An admirable move towards a free market, and yet . . . . To compete, the brokers now needed more capital. Where were they to get it? In prac- tice, from the banks — as shareholders. One broking firm after another has sold out, in whole or in part, at once or by instalments, to a bank, British or American, merchant or clearing bank or conglomerate. They become tied houses. No one can yet be sure how this will affect their customers' freedom of choice, but customers within the City can be excused for thinking that it will. If you are a fund manager, how happy are you to give business to a broking firm controlled by a bank which also manages funds? If you want to get shares placed in the market would you go to a broking firm controlled by one of your competitors in the share-issuing business? Given that the brokers need capital, the natural solution would be to raise it from a wide spread of City institutions, so that no individual shareholder would be dominant. The big investors have made it known that such deals are on offer. The trouble is the price. Brokers can only sell their independence once, and they can sell it more profitably if they sell to one buyer. The sort of terms now being agreed must tempt them sorely. They have had all the combined benefit of fixed commissions and a sustained rise in share prices. Fixed commissions are going, it is possible that the bull market has gone. Now they find themselves invited to sell out at something like five times their asset value, or 12 times what they earned in their last year - which for many was a record, and for some, unrepeatable. But in the workings of the market, a rarity value will now attach to firms whose backers are at a decent distance - like Quilter Goodison (Stock Exchange chairman Sir Nicholas Goodison's firm), linked to a Swedish insurance company. or Rowe & Pitman

linked to Charter, the mining finance house. Rowe & Pitman is busy denying rumours that Charter will sell its stake on. Rarer still are those who have not joined the game at all. Note the mighty name of Cazenove. It would be great fun to see Caz put the boot on the other foot, bring the institutions into line with its usual mesmer- ic power, raise capital, and buy a bank.