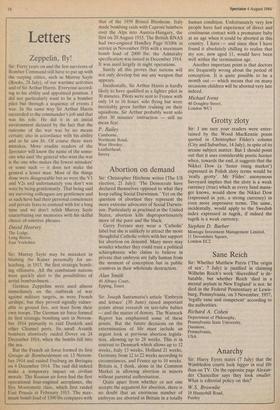 Sir: Murray Sayle may be mistaken in • blaming the

Kaiser personally for un- leashing, in 1915, the first strategic bomb- ing offensive. All the combatant nations were quickly alert to the possibilities of aerial bombardment.

German Zeppelins were used almost immediately on the outbreak of war against military targets, as were French airships; but they proved signally vulner- able to ground fire, not least from their own troops. The German air force formed its first strategic bombing unit in Novem- ber 1914 primarily to raid Dunkirk and other Channel ports. Its small Aviatik bombers abortively raided Dover on 24 December 1914, when the bombs fell into the sea.

But the French air force formed its first Groupe de Bombardement on 13 Novem- ber 1914 and raided Freiburg im Breisgau on 4 December 1914. The raid did indeed make a temporary impact on civilian morale. The Russian air force had the first operational four-engined aeroplanes, the Ilya Mourometz class, which first raided East Prussia in February 1915. The max- imum bomb load of 1500 lbs compares with

that of the 1939 Bristol Blenheim. Italy made bombing raids with Caproni bombers over the Alps into Austria-Hungary, the first on 20 August 1915. The British RNAS had two-engined Handley Page 0/100s in service in November 1916 with a maximum bomb load of 2000 Ibs: the Admiralty specification was issued in December 1914. It was used largely in night operations.

Surely all this proves that nations will not only develop but use any weapon that appears.

Incidentally, Sir Arthur Harris is hardly likely to have qualified as a fighter pilot in 30 minutes. Pilots were sent to France with only 14 to 16 hours' solo flying but were inevitably given further training on their squadrons. Sir Arthur probably went solo after 30 minutes' instruction — still no mean feat.