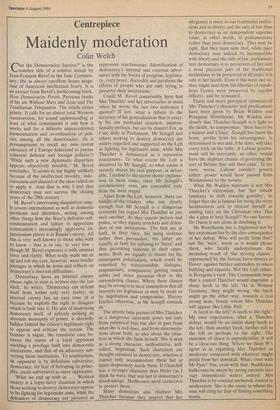 Can the Democracies Survive?' is the V-../sombre title of a sombre article by Jean-Francois Revel in the June Commen- tary, the as always excellent house maga- zine of American intellectual Jewry. It is an extract from Revel's forthcoming book, How Democracies Perish. Previous books of his are Without Marx and Jesus and The Totalitarian Temptation. The article closes grimly. It calls for an almost total Western reconversion, for sound understanding at least of what communism is and how it works and for a hitherto unprecedented harmonisation and co-ordination of poli- cies among all the democracies. (Is it presumptuous to recall my own recent advocacy of a Europe federated to pursue coherent defence and foreign policies?) `While such a new diplomatic departure appears objectively possible,' M. Revel concludes, It seems to me highly unlikely because of the intellectual frivolity, inde- cisiveness and discord of the men called on to apply it. And that is why I feel that democracy may not survive the closing years of the 20th century.'

M. Revel's intervening disquisition amp- ly covers international as well as domestic problems and disorders, noting among other things how the West's defeatist self- condemnation and failure to appreciate communism's increasingly aggressive ex- pansionism places it at Russia's mercy. All this is very well known to those who wish to know — that is to say, to very few though M. Revel expresses it with unusual force and clarity. What really made me sit up and rub my eyes, however, were briefer passages in which he notes and reflects on democracy's internal difficulties.

`Democracy faces an internal enemy whose right to exist is written into the law itself,' he writes. 'Democracy can defend itself from within only very feebly; its internal enemy has an easy time of it because he exploits the right to disagree which is built into it. His aim of destroying democracy itself, of actively seeking an absolute monopoly of power, is shrewdly hidden behind the citizen's legitimate right to oppose and criticise the system. The frontier is vague, the transition easy be- tween the status of a loyal opponent wielding a privilege built into democratic institutions, and that of an adversary sub- verting those institutions. To totalitarians, an opponent is by definition subversive; democracy, for fear of betraying its princi- ples, treats subversives as mere opponents.

`What we end up with in . . . Western society is a topsy-turvy situation in which those seeking to destroy democracy appear to be fighting for legitimate aims, while the defenders of democracy are pictured as repressive reactionaries. Identification of democracy's internal and external adver- saries with the forces of progress, legitima- cy, even peace, discredits and paralyses the efforts of people who are only trying to preserve their institutions' Could M. Revel conceivably have had Mrs Thatcher and her adversaries in mind when he wrote the last two sentences I quoted? If not, what a tribute to the accuracy of his generalisation that it exact- ly fits our particular situation, uninten- tionally perhaps, but not by chance! For, as I see daily in Parliament, Mr Scargill and others seeking to destroy democracy are widely regarded and supported on the Left as fighting for legitimate aims, while Mrs Thatcher is denounced as a repressive reactionary. To what extent the Left is deceived by Mr Scargill, to what extent it secretly shares his real purpose, is debat- able. I incline to the secret-sharer explana- tion in most cases, since Mr Scargill's revolutionary aims are concealed only from the most stupid.

Apart from the Left, however, there are middle-of-the-roaders who see clearly enough that Mr Scargill is a dangerous extremist but regard Mrs Thatcher as just such another. As they equate pickets and police, so they equate attackers and defen- ders of our institutions. The first are at fault, in their view, for using violence rather than persuasion; the latter are equally at fault for refusing to 'listen' and thus provoking violence in their oppo- nents. Both are equally to blame for the consequent polarisation, which could be remedied by statesmanship, dialogue, magnanimity, compassion, getting round tables and otner panaceas dear to the surrendering classes. Where these classes may be wrong is in their assumption that all interests are legitimate or may be made so by negotiation and compromise. History teaches otherwise, as Mr Scargill reminds us.

The utterly false picture of Mrs Thatcher as a dangerous extremist arises not only from polemical bias but also in part from what she is and does, and from misconcep- tions about both, as also about the situa- tion in which she finds herself. She is seen as a strong character, authoritative, self- willed, imperious. Such characters are thought unsuited to democracy, whereas it cannot only accommodate them but at times desperately needs them. If Churchill was a stronger character than Hitler (as I think he was), that was not to democracy's disadvantage. Herbivores need carnivores to protect them.

Many democrats also mistrust Mrs Thatcher because they suspect that her allegiance is more to our traditional institu- tions and to liberty and the rule of law than to democracy as an independent supreme value, in other words, to parliamentary rather than pure democracy. They may be right. But they must note that, while pure democracy may indeed by incompatible with liberty and the rule of law, parliamen- tary democracy is to preservers of her sort a most precious part of the traditional institutions to be preserved at all costs: it is safe in her hands. Even if this were not so, they might note how the liberties of repub- lican France were preserved by royalist officers, and be reassured.

Fairer and more percipient estimates of Mrs Thatcher's character and predicament have been given by Brian Walden and Peregrine Worsthorne. Mr Walden sees clearly that Thatcher-Scargill is a fight to the death, no compromise: 'there has to be a winner and a loser'. Scargill has burnt his boats, profits from his intransigence, is determined to win and, if he does, will take every trick on the table. A Labour govern- ment will be inevitable: no other 'would have the slightest chance of governing the sort of Britain that will then exist'. In my view, worse, Labour couldn't govern either: power would have passed from Westminster to the soviets.

What Mr Walden mistrusts is not Mrs Thatcher's extremism, but 'her inbuilt tendency to drift towards gentility', to forget that she is famous for being the stern headmistress and to miscast herself as smiling fairy on the Christmas tree. Has she a plan to beat Scargill? No one knows: Dr Owen is not alone in doubting it.

Mr Worsthorne too is frightened not by her extremism but by the dire consequence of her defeat. Who will profit from that? not the 'wets', much as it would please them, who fatally underestimate the mounting wrath of 'the striving classes', represented by the furious lorry-drivers at Dover, against further surrenders to union bullying and rapacity. Not the Left either, in Peregrine's view. The Communists hope that a routed Thatcher would engender a sharp lurch to the left. As in Weimar Germany, they might wrong: the lurch might go the other way, towards a real strong man, beside whom Mrs Thatcher will appear like Little Nell.

A lurch to the left? A lurch to the right? My own expectation, after a Thatcher defeat, would be an initial sharp lurch to the left, then another lurch, further still to the left or perhaps to the right. The outcome of chaos is unpredictable: it will be a close-run thing. Where we three W's agree is in regarding Mrs Thatcher as moderate compared with whatever might profit from her downfall. What, even with Mr Pym? Yes, even with that. Rudderless hulks may be swept by strong currents into vex), immoderate waters indeed. Mrs Thatcher is by contrast anchored, rooted in moderation. She is the nurse to whom the wise will cling for fear of finding something worse.