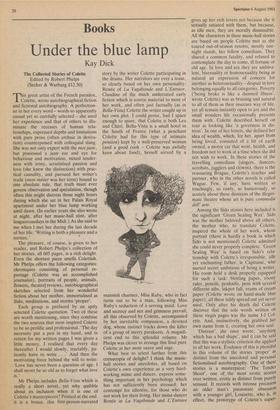 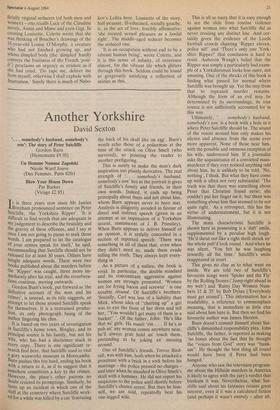 Under the blue lamp

The Collected Stories of Colette Edited by Robert Phelps (Secker & Warburg £12.50) This great artist of the French paradox, Colette, wrote autobiographical fiction and fictional autobiography. A perfection- ist in her every word — words so apparently casual yet so carefully selected — she used her experience and that of others to illu- minate the recesses of human rela- tionships, expressed depths and limitations with pure prose (often archaic in deriva- tion) counterpoised with colloquial slang. She was not only expert with the mot juste, but possessed a juste ear and eye for behaviour and motivation, mixed tender- ness with irony, scrutinised passion and love (she knew the distinction) with prac- tical causality, and pursued her writer's trade (mon metier was her term) bound to one absolute rule, that truth must ever govern observation and speculation, though often this might distress those night hours during which she sat in her Palais Royal apartment under her blue lamp working until dawn. (In earlier years she also wrote at night, after her music-hall stint, after languorousdays in the Midi.) As she said to me when I met her during the last decade of her life: 'Writing is both a pleasure and a torture.'

The pleasure, of course, is given to her reader, and Robert Phelps's collection of her stories, all 605 pages, is a rich delight. Even the shortest piece smells Colettish. Mr Phelps offers the following categories: chroniques consisting of personal re- portage (Colette was an accomplished journalist), portraits of people, animals, flowers, theatre{ reviews, autobiographical sketches selected from her wonderful fiction about her mother, immortalised as Sido, meditations, and stories 'proper'.

Each group is prefaced by an aptly selected Colette quotation. Two of these are worth mentioning, since they combine the two sources that most inspired Colette to be so prolific and professional. 'The day necessity put a pen in my hand, and in return for my written pages I was given a little money, I realised that every day thereafter I would slowly, tractably,' pa- tiently have to write . . .' And then the motivating force behind the will to write: 'Love has never been a question of age. I shall never be so old as to forget what love is.'

Mr Phelps includes Bella-Vista which is really a short novel, yet why quibble about its inclusion when it is one of Colette's masterpieces? Printed at the end, it is a bonus, this first-person-narrated story by the writer Colette participating in the drama. Her narrators are ever a tease, so clearly based on her own personality: Renee of La Vagabonde and L'Entrave, Claudine of the much underrated early fiction which is source material to most of her work, and often just factually (as in Bella-Vista) Colette the writer caught up in her own plot. I could prove, had I space enough to spare, that Colette is both Lea and Cheri. Bella-Vista is a small hotel in the South of France (what a penchant Colette had for this type of intimate pension) kept by a well-preserved woman (and a good cook — Colette was awfully keen about food), herself served by a

mannish charmer, .Miss Ruby, who in fact turns out to be a man, following Miss Ruby's seduction of a serving maid. Love and secrecy and sex and grimness prevail; all this observed by Colette, accompanied by her inevitable companion, a devoted dog, whose instinct tracks down the killer of a group of merry parakeets. A magnifi- cent end to this splendid volume. Mr Phelps was clever to arrange this final pure Colette at her most suave and sage.

What best to select further from this cornucopia of delight? I think the music- hall stories and anecdotes, all based on Colette's own experience as a very hard- working mime and dancer, express some- thing important in her psychology which has not sufficiently been stressed: her contempt for idleness, for those who do not work for their living. Her mime-dancer Renee in La Vagabonde and L'Entrave gives up her rich lovers not because she is sexually satiated with them, but because, as idle men, they are morally dismissible. All the characters in these music-hall stories are based on people Colette met as she toured out-of-season resorts, mostly one- night stands, her fellow comedians. They shared a common fatality, and refused to contemplate the day to come, ill fortune or old age. In love and sex they are ambiva- lent, bisexuality or homosexuality being as natural an expression of concern for another as heterosexuality — despair in love belonging equally to all categories. Poverty (`being broke is like a damned illness', wrote Colette) was as bruising and natural to all of them as their insecure way of life, yet all remain instantly open to joy and the small wonders life occasionally presents them with. Colette described herself on tour as looking like 'a governess in dis- tress'. In one of her letters, she defined her idea of wealth, which, for her, apart from being loved, consisted of a bit of earth owned, a motor car that went, health, and freedom not to work at a time when she did not wish to work. In these stories of the travelling comedians (singers, dancers, acrobats, jugglers and clowns), there is the reassuring Brague, Colette's teacher and partner, who in the other novels is called Wague. Few, if any, have written so touchingly, so rawly, so humorously, so acutely about these denizens of the illegiti- mate theatre whose art is pure commedia dell' arte.

Among the Sido stories here included is the significant 'Green Sealing Wax'. Sido was the mother beloved above all others, the mother who, to translate Colette, inspired the whole of her work, whose portrait (there is hardly a book in which Sido is not mentioned) Colette admitted she could never properly complete. 'Green Sealing Wax' is based on Sido's rela- tionship with Colette's irresponsible, idle yet enchanting father, le Capitaine, who nursed secret ambitions of being a writer. His room held a desk properly equipped for such a task: blotting paper, ebony ruler, pencils, penknife, pens with several different nibs, inkpot full, reams of cream paper (Colette wrote on hand-made blue paper), all these tidily spread out yet never used. Only after his death did Colette discover that the sole words written on these virgin pages was the name J-J Col- ette. And, instinctively, she grabbed her own name from it, creating her own seal.

ficially virginal seducers (of both men and women) — one recalls Luce of the Claudine novels, Annie and Mime and even Gigi. In creating Louisette, Colette wrote that she was thinking of Boucher's drawings of the 16-year-old Louise O'Morphy, a creature who had not finished growing up, and whose dimpled body (the 'dimpled' hardly conveys the fruitiness of the French `pote- le) proclaims an urgency as strident as if she had cried, 'Do rape me, deliver me from myself, otherwise I shall explode with frustration.' Surely there is much of Nabo-

kov's Lolita here. Louisette of the story, half-peasant, ill-educated, socially gauche, is, in the act of love, forcibly affirmative: `she treated sexual pleasure as a lawful right'. The middle-aged seducer becomes the seduced one.

'It is an occupation without end to be a vibrant human being', wrote Colette, and it is this sense of infinity, of reverence almost, for the vibrant life which glitters through this book. Seldom could be found so gorgeously satisfying a collection of stories as this.