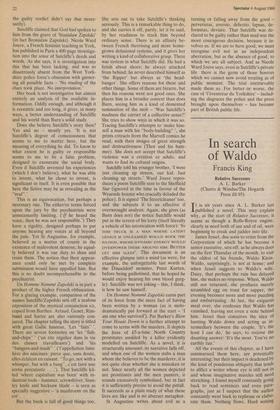 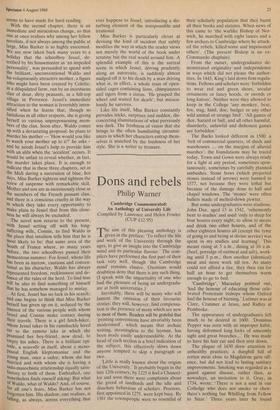 It is six years since A. L. Barker last published a novel. This may explain why, at the start of Relative Successes, it seems as though a Rolls-Royce engine, clearly in need both of use and of oil, were beginning to creak and judder into life.

James Jessel, due soon to retire from the Corporation of which he has become a senior executive, sets off, as he always does on the first Thursday of the month, to visit the oldest of his friends, Waldo Klein. Waldo, surprisingly, is not at home; and when Jessel suggests to Waldo's wife, Daisy, that perhaps the rain has delayed him, she makes no response. When, Waldo still not returned, she produces merely scrambled egg on toast for supper, the evening becomes more and more puzzling and embarrassing. At last, the exiguous meal over, she confesses that Waldo has vanished, leaving not even a note behind him. Jesse! then conceives the idea of hunting Waldo down and acting as in- termediary between the couple. 'It's the least I can do,' he says, to receive the daunting answer: 'It's the most. You're no earthly fun.' All the events of this chapter, as I have summarised them here, are potentially interesting; but their impact is deadened by the kind of ponderous obliquity that tends to afflict a writer whose eye is still not in and whose imaginative muscles still need stretching. I found myself constantly going back to read sentences and even para- graphs, just as I suspect that the author constantly went back to rephrase or elabo- rate them. Nothing flows. Hard writing

seems to have made for hard reading.

With the second chapter, there is an immediate and miraculous change, so that one at once realises why among her fellow novelists, if not always among the public at large, Miss Barker is so highly esteemed. We are now taken back many years to a holiday that the schoolboy Jessel, de- scribed by his housemaster as 'an impeded personality', was persuaded to spend with the brilliant, unconventional Waldo and his voluptuously attracti',e mother, a figure who might have been created by Colette, in a dilapidated farm, run by an incestuous Clan of dour, dirty peasants, in a hill-top village in Provence. Jessel's immediate attraction to the woman is feverishly inten- sified when he learns that, though so fastidious in all other respects, she is giving herself to various unprepossessing mem- bers of the clan. Soon after, Waldo comes UP with a devastating proposal: he plans to murder his mother — 'How would you like to watch your mother up to it?' he asks and he needs Jessel's help to provide him with an alibi when the 'accident' occurs. It would be unfair to reveal whether, in fact, the murder takes place. It is enough to indicate that in these three chapters, set in the Midi during a succession of blue, hot days, Miss Barker tightens and tightens the screw of suspense with remarkable skill. Mother and son are as incestuously close as the members of the French peasant clan, and there is a conscious cruelty in the way in which they take every opportunity to make plain to Jessel that from this close- ness he will always be excluded.

The novel now returns to the present, With Jessel setting off with his long- suffering wife, Connie, to find Waldo in the place that intuition tells him that he is most likely to be; that same area of the South of France where, so many years before, the two schoolboys passed their momentous summer. For Jessel, whose life has been as narrow, cautious and conven- tional as his character, Waldo has always represented freedom, recklessness and de- fiance of the rules of the herd. To find him Will be also to find something of himself that he has somehow managed to mislay.

At first, Jessel has no luck in his search; and one begins to think that Miss Barker herself has given up on it, seduced by the interest of the various people with whom Jessel and Connie make contact during their travels. There is a girl hitch-hiker, Whom Jessel takes in his ramshackle hired ear to the remote lake in which she Promised her boy-friend, now dead, to empty his ashes. There is a brilliant epi- sode, a nouvelle in itself, about a meno- pausal English kleptomaniac and the Young man, once a sailor, whom she has married and with whom she is having a sado-masochistic relationship equally satis- factory to both of them. Enthralled, one nonetheless finds oneself asking: But what of Waldo, what of Waldo? And, of course, for all one's fears, Miss Barker has not forgotten him. His shadow, one realises, is falling, as always, across everything that

ever happens to Jessel, introducing a dis- turbing element of the irresponsible and irrational.

Miss Barker is particularly clever at devising the kind of incident that subtly modifies the way in which the reader views not merely the world of the book under scrutiny but the real world around him. A splendid example of this is the surreal scene in which Jessel, driving prudently along an autoroute, is suddenly almost nudged off it to his death by a man driving what is, in effect, a whole train of open- sided cages containing lions, chimpanzees and tigers from a circus. 'He grasped the wheel and waited for death'; but miracu- lously he survives.

Like life itself, Miss Barker constantly provides tricks, surprises and sudden, dis- concerting illuminations of what previously was dark. The freshness of vision that she brings to the often humiliating circumst- ances in which her characters entrap them- selves is matched by the freshness of her style. She is a writer to treasure.