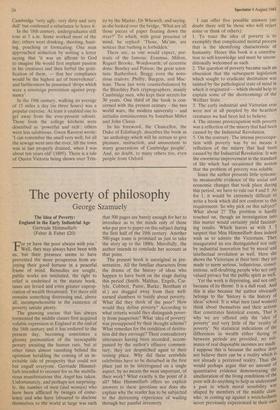 rr he aim of this pleasing anthology is 1 given in the preface: `To reflect the life and work of the University through the ages, to give an insight into the Cambridge mind and its particular flavour.' The com- pilers have performed the first part of their task very well, though 'the Cambridge mind' remains elusive. Oxonians would doubtless deny that there is any such thing. (I speak with the impartiality of one who had the pleasure of being an undergradu- ate at both universities.)

Inevitably, there will be many who will lament the omission of their favourite stories: they will, however, find compensa- tion in the presence of many which are new to most of them. Readers will be grateful that 'printing conventions have invariably been modernised', which means that archaic writing, meaningless to the layman, has been made easily understandable. At the head of each section is a brief indication of the subject; this effectively slows down anyone tempted to skip a paragraph or two.

'Little is really known about the origins of the University.' It probably began in the late 12th century; by 1225 it had a Chancel- lor and soon there were complaints about the greed of landlords and the idle and dissolute behaviour of scholars. Proctors, first appointed in 1275, were kept busy. By 1381 the townspeople were so resentful of their scholarly population that they burnt all their books and statutes. When news of this came to 'the warlike Bishop of Nor- wich, he marched" with eight lances and a few archers to Cambridge where he attack- ed the rebels, killed some and imprisoned others'. (The present Bishop is an ex- Commando chaplain).

From the outset, undergraduates de- monstrated originality -and independence in ways which did not please the author- ities. In 1443, King's laid down firm regula- tions. Fellows and scholars were 'forbidden to wear red and green shoes, secular ornaments or fancy hoods, or swords or long knives'. Neither were they allowed to keep in the College 'any monkey, bear, fox, stag, hind, doe, badger or any other wild animal or strange bird'. 'All games of dice, hazard or ball, and all other harmful, disorderly, unlawful and dishonest games are' forbidden.'

The Backs looked different in 1500: a 'belt of commercial quarters, of sheds and warehouses ... on the margins of alluvial marshes'; the foundations may be traced today. Town and Gown were always ready for a fight at any period, sometimes spon- taneously, sometimes by carefully planned. ambushes. Stone bows (which projected stones instead of arrows) were banned in 1577, not because they were lethal but because of the damage done to hall and chapel windows. The 'stones' were often bullets made of melted-down pewter.

But some undergraduates were studious. John Dee, aged 15 in 1542, 'vehemently bent to studies' and used 'only to sleep for four houres every night; to allow to meate and drink two other houres, and of the other eighteen houres all (except the tyme of going to and being at divine service) was spent in my studies and learning'. This meant rising at 5 a.m., dining at 10 a.m. (beef, porridge of oatmeal and salt), work- ing until 5 p.m., then another (identical) meal and more work till ten. As many could not afford a fire, they then ran for half an hour to get themselves warm enough to go to bed.

`Cambridge', Macaulay pointed out, 'had the honour of educating those cele- brated Protestant bishops whom Oxford had the honour of burning.' Latimer was at Clare, Cranmer at Jesus, and Ridley at Pembroke.

The appearance of undergraduates left much to be desired in 1600. 'Dominus Pepper was seen with an improper habit, having deformed long locks of unseemly sight and great breeches...' He was made to have his hair cut and then sent down.

The plague of 1630 drew, attention to unhealthy practices; a dunghill full of rotten meat close to Magdalene gave off- ence, but did not lead to lasting sanitary improvements. Smoking was regarded as a guard against disease, rather than, as nowadays, an invitation to it. Gray, in 1734, wrote: 'There is not a soul in our Colledge who does not smoke or chew: there's nothing but Whiffing from Fellow to Sizar.' Three years later he found

Cambridge 'very ugly, very dirty and very dull' but confessed a reluctance to leave it.

In the 18th century, undergraduates still rose at 5 a.m. Some worked most of the day; others went drinking, shooting, hunt- ing, poaching or fornicating. One man approached seduction by writing a letter saying that 'it was an affront to God to imagine He would first implant passion in his creatures and then forbid the grati- fication of them, — that her compliance would be the highest act of benevolence', and furthermore he possessed 'drops which were a sovereign prevention against preg- nancy'.

In the 19th century, walking an average of 15 miles a day (in three hours) was a popular exercise. At least it enabled one to get away from the ever-present odours. Those from the college kitchens were described as 'powerful and rich'; others were less salubrious. Gwen Raverat wrote: 'I can remember the smell very well, for all the sewage went into the river, till the town was at last properly drained, when I was about ten years old' (1895). There is a tale of Queen Victoria being shown over Trin- ity by the Master, Dr Whewell, and saying, as she looked over the bridge, 'What are all those pieces of paper floating down the river?' To which, with great presence of mind, he replied: 'Those, Ma'am, are notices that bathing is forbidden.'

There are, as one would expect, por- traits of the famous: Erasmus, Milton, Rupert Brooke, Wordsworth; of eccentric dons: Bentley and Porson; the great scien- tists: Rutherford, Bragg; even the noto- rious traitors: Philby, Burgess, and Mac- lean. These last were counterbalanced by the Bletchley Park cryptographers, mainly Cambridge men, who kept their secrets for 30 years. One third of the book is con- cerned with the present century – the two world wars, the modern university – and includes reminiscences by Jonathan Miller and John Cleese.

In his foreword, the Chancellor, the Duke of Edinburgh, describes the book as 'an anthology which will be certain to give pleasure, instruction, and amusement to many generations of Cambridge people'. And, no doubt, to many others too, even people from Oxford.