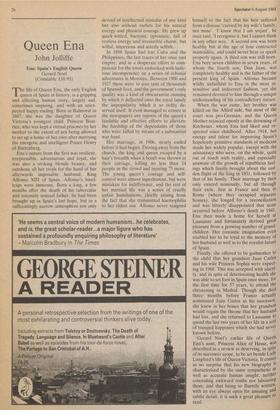 The life of Queen Ena, the only English queen of Spain in history, is a gripping and affecting human story, largely sad, sometimes inspiring, and with an unex- pected happy ending. Born at Balmoral in 1887, she was the daughter of Queen Victoria's youngest child, Princess Beat- rice, who was kept a virtual prisoner by her mother to the extent of not being allowed to set up a home of her own after marrying the energetic and intelligent Prince Henry of Battenberg.

Ena's nature from the first was resilient, irrepressible, adventurous and loyal; she was also a striking blonde beauty, and outshone all her rivals for the hand of her afterwards impossible husband, King Alfonso XIII of Spain. Alfonso's hand- icaps were immense. Born a king, a few months after the death of his tubercular and intensely sensual father, he had been brought up as Spain's last hope, but in a suffocatingly narrow atmosphere not only devoid of intellectual stimulus of any kind but also without outlets for his natural energy and physical courage. He grew up quick-witted, buoyant, optimistic, full of restless energy and irresistible charm, but wilful, imperious and utterly selfish.

In 1898 Spain had lost Cuba and the Philippines, the last traces of her once vast empire, and in a desperate effort to com- pensate for the losses embarked with ludic- rous incompetence on a series of colonial adventures in Morocco. Between 1906 and 1927 these were to cost tens of thousands of Spanish lives, and the government's only quality was a kind of obscurantist cunning by which it deflected onto the royal family the unpopularity which it so richly de- served itself. It even managed to censor in the newspapers any reports of the queen's laudable and effective efforts to alleviate the hardship of the dependants of those who were killed by means of a substantial war fund.

Her marriage, in 1906, nearly ended before it had begun. Driving away from the church, the king and queen escaped by a hair's breadth when a bomb was thrown at their carriage, killing no less than 24 people in the crowd and injuring 75 more. The young queen's courage and self- control were almost superhuman, but were mistaken for indifference, and the rest of her married life was a series of cruelly unfair humiliations, chiefly arising from the fact that she transmitted haemophilia to her eldest son. Alfonso never resigned himself to the fact that his heir suffered from a disease 'carried by my wife's family, not mine'. 'I know that I am unjust', he once said, 'I recognise it, but I cannot think in any other way.' A second son was born healthy but at the age of four contracted mastoiditis, and could never hear or speak properly again. A third son was still-born. Ena bore seven children in seven years, of whom the fourth son, Don Juan, was completely healthy and is the father of the present king of Spain. Alfonso became wildly unfaithful to Ena in the most in- sensitive and indiscreet fashion, yet she remained devoted to him through a unique understanding of his contradictory nature.

When the war came, her brother was killed on the Allied side, but most of the court was pro-German, and the Queen Mother rejoiced openly at the drowning of Kitchener, whom Ena had liked and re- spected since childhood. After 1918, her energy and talent for improving Spain's hopelessly primitive standards of medicine made her widely popular, except with the aristocracy who were, on the whole, quite out of touch with reality, and especially unaware of the growth of republican feel- ings which finally brought about the sud- den flight of the king in 1931, followed by that of his family. Their marriage by then only existed nominally, but all through their exile, first in France and then in Rome (where they occupied separate houses), she longed for a reconciliation and was bitterly disappointed that none occurred before Alfonso's death in 1941. Ena then made a home for herself at Lausanne and fortunately derived great pleasure from a growing number of grand- children. Her romantic imagination even enabled her to be loyal to the memory of her husband as well as to the royalist future of Spain. Finally, she offered to be godmother to the child that her grandson Juan Carlos and his wife Princess Sophia were expect- ing in 1968. This was accepted with alacri- ty, and in spite of deteriorating health she was able to set foot in Spain once more, for the first time for 37 years, to attend the christening in Madrid. Though she died three months before Franco actually nominated Juan Carlos as his successor, she knew in her bones that her grandson would regain the, throne that her husband had lost, and she returned to Lausanne to spend the last two years of her life in a sort of tranquil happiness which she had never known before.

Gerard Noel's earlier life of Queen Ena's aunt, Princess Alice of Hesse, was described in a review as deserving, in spite of its narrower scope, to be set beside Lady Longford's life of Queen Victoria. It comes as no surprise that his new biography is characterised by the same sympathetic as well as accurate human insight, neither concealing awkward truths nor labouring them, and that being so fluently written, with an eye always open for amusing and subtle detail, it is such a great pleasure to read.