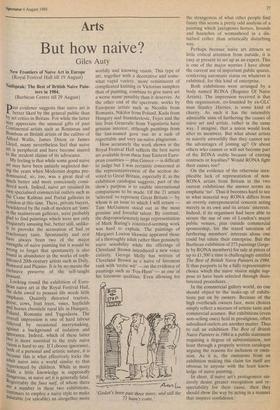 east evidence suggests that naive art is better liked by the general public than by art critics in Britain. For while the latter may appreciate the unusual gifts of past Continental artists such as Rousseau and Bombois or British artists of the calibre of Alfred Wallis, James Dixon or James Lloyd, many nevertheless feel that naive art is peripheral and have become inured to the strident claims of its advocates.

My feeling is that while some good naive art may have been unfairly neglected dur- ing the years when Modernist dogma pre- dominated, so, too, was a great deal of much better and more consciously consi- dered work. Indeed, naive art retained its own specialised commercial outlets such as the Crane Kalman and Portal galleries in London at this time. There, private buyers, bewildered by the rash of modern art 'isms' in the mainstream galleries, were probably glad to find paintings which were not only frequently amusing but, better still, unlike- ly to provoke the accusation of bad or reactionary taste. Spontaneity and zest have always been two of the major strengths of naive painting but it would be wrong to forget that spontaneity is also found in abundance in the works of soph- isticated 20th-century artists such as Dufy, Bonnard and Picasso. It is by no means the exclusive preserve of the self-taught Peasant.

Looking round the exhibition of Euro- pean naive art at the Royal Festival Hall, the debt owed to peasant life needs little emphasis. Quaintly distorted tractors, geese, cows, fruit trees, vines, hayfields and horses chronicle rural life in Hungary, ?Oland, Romania and Yugoslavia. The overall impression is one of hard labour relieved by occasional merrymaking, against a background of isolation and Ignorance. Indeed, which of these latter two is more essential to the truly naive vision is hard to say. If I choose ignorance, both of a personal and artistic nature, it is because this is what effectively locks the adult naive into a world similar to that experienced by children. While in many fields a little knowledge is supposedly dangerous, in naive art it is generally fatal. Regrettably the faux nail; of whom there are a number in these two exhibitions, continues to employ a naive style to make Palatable (or saleable) an altogether more

worldly and knowing vision. This type of art, together with a decorative and some- what vapid variety, more reminiscent of complicated knitting or Victorian samplers than of painting, combine to give naive art a worse name possibly than it deserves. At the other end of the spectrum, works by European artists such as Nicodin from Romania, Nikifor from Poland, Kada from Hungary and Stanislavlevic, Fejes and the late Ivan Generalic from Yugoslavia have genuine interest, although paintings from the last-named gave rise to a rash of regrettable and very un-naive plagiarism.

How accurately the work shown at the Royal Festival Hall reflects the best naive art available from these four Eastern Euro- pean countries — plus Greece — is difficult to judge but I was certainly concerned at the representativeness of the section de- voted to Great Britain, especially if, as the exhibition catalogue suggests, part of the show's purpose is to enable international comparisons to be made. Of the 21 artists `selected' to represent Great Britain — by whom is an issue to which I will return Tam McGuiness stood out as the most genuine and forceful talent. By contrast, the disproportionately large representation of Mark Baring's contrived-seeming work was hard to explain. The paintings of Margaret Loxton likewise appeared those of a thoroughly adult rather than genuinely naive sensibility while the offerings of Cleveland Brown introduced a new voice entirely. George Melly has written of Cleveland Brown as a naive of foremost rank with 'erotic wit' — on the evidence of paintings such as Tox-Hune — as one of his foremost qualities. Even allowing for `Godot's been past three times, and still the 73 hasn't come.' the strangeness of what other people find funny this seems a pretty odd analysis of a painting which juxtaposes horses, hounds and haunches of womanhood in a dis- turbed rather than artistically disturbing way.

Perhaps because naive art attracts so little critical attention from outside, it is easy at present to set up as an expert. This is one of the major worries I have about the current use of important public spaces, conferring automatic status on whatever is exhibited, for this kind of enterprise.

Both exhibitions were arranged by a body named RONA (Register Of Naive Artists). The impression received is that this organisation, co-founded by ex-GLC man Stanley Harries, is some kind of charity. As such it has the ostensibly admirable aims of furthering the causes of naive art and artists, rather in the same way, I imagine, that a union would look after its members. But what about artists so naively unworldly that they cannot see the advantages of joining up? Or about others who cannot or will not become part of the RONA stable because of existing contracts or loyalties? Would RONA fight their causes too?

On the evidence of the otherwise inex- plicable lack of representation of non- RONA artists from Britain in the two current exhibitions the answer seems an emphatic `no'. Thus it becomes hard to see in what material way RONA differs from an overtly entrepreneurial concern acting merely in its own and its artists' interests. Indeed, if its organisers had been able to secure the use of one of London's major public venues, plus outside commercial sponsorship, for the stated intention of furthering members' interests alone one could but salute their enterprise. But the Barbican exhibition of 273 paintings (large- ly by RONA members) for sale at prices of up to £1,500 a time is challengingly entitled The Best of British Naive Painters in 1984. It thus purports to be a fully representative choice which the naive visitor might sup- pose to have been selected through disin- terested procedures.

In the commercial gallery world, no one should object to the make-up of exhibi- tions put on by owners. Because of the high overheads owners face, most choices simply reflect a mixture of artistic taste and commercial acumen. But exhibitions (even non-selling ones) held in prestigious, often subsidised outlets are another matter. Thus to call an exhibition The Best of British Naive Painters in 1984 is a public statement requiring a degree of substantiation, not least through a properly written catalogue arguing the reasons for inclusion or omis- sion. As it is, the omissions from an exhibition making this claim for itself are obvious to anyone with the least know- ledge of naive painting.

In short, if naive art's protagonists sin- cerely desire greater recognition and re- spectability for their cause, then they should show the way by acting in a manner that inspires confidence.