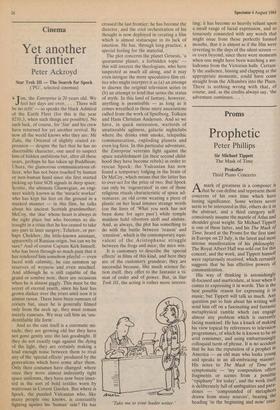 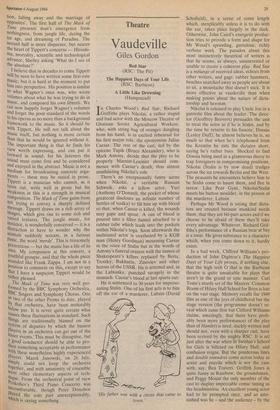 Amark of greatness in a composer is that he can define and represent those concerns of his own time which have lasting significance. Some writers never seem to be interested in this, others do it in the abstract, and a third category self- consciously assume the mantle of Atlas and shoulder great weight. Sir Michael Tippett is one of these latter, and his The Mask of Time, heard at the Proms for the first time in Europe on 23 July, is the latest and most intense manifestation of his philosophy. The Royal Albert Hall was sold out for this concert, and the work, and Tippett himself were rapturously received, which certainly suggests that he has effective powers of communication.

His way of thinking is astonishinglY ill-focused and inarticulate, at least when it comes to expressing it in words. This is the best possible reason for expressing it In music; but Tippett will talk so much. AnY question put to him about his writing will send him off on a fascinating and fantastic metaphysical ramble which can engage almost any problem which is currently facing mankind. He has a knack of making his view topical by references to television programmes, of which he is known to be an avid consumer, and using embarrassinglY colloquial turns of phrase. It is no accident that he has the reputation of a prophet in America — an old man who looks young and speaks in an all-embracing manner. His notes to The Mask of Time are symptomatic — 'my composition offers fragments or scenes from a possible "epiphany" for today', and the work itself is deliberately full of ambiguities and para- doxes — 'compounded of metaphors drawn from many sources', bearing the heading 'in the beginning and now/ cren- tion, falling away and the marriage of opposites'. The first half of The Mask of Time presents man's emergence from nothingness, from jungle life, during the ice age, and dreaming of Paradise. The second half is more disparate, but nearer the heart of Tippett's concerns — Hiroshi- ma, mortality, scientific and technological advance, Shelley asking What do I see of the absolute?'

1 believe that in decades to come Tippett will be seen to have written some first-rate music; but it is hard at the moment to put him into perspective. His position is similar to what Wagner's once was, who wrote Volumes about what he was trying to do in music, and composed his own libretti. We can now happily forget Wagner's volumes and forget the poor standard of the words to his operas as no more than a background framework to the music. So it should be with Tippett. He will not talk about the music itself, but nothing is more certain than that he would be ignored without it. The important thing is that he finds his view worth expressing, and can put it forward in sound; for his listeners the sound must come first and be considered and enjoyed in the abstract. Music is not a medium for broadcasting concrete argu- ments — these may be stated in prose. Tippets is a musician who cannot, as it turns out, write well in prose but his weakness in this is a strength in musical composition. The Mask of Time gains from. not trying to convey a sharply defined Message. Tippett draws on a rich array of Images, which give rise to some rich and varied textures. The jungle music, for instance, is wonderfully conceived — it is a distraction to have to wonder why the animals suddenly scream, in a furious panic, the word `trierde'. This is tiresomely pretentious — but the music has a life of its uvyn. My companion at this concert, a Youthful groupie, said that the whole piece sounded like Frank Zappa. I am not in a Position to comment on this, except to say that I have a suspicion Tippett would be rather pleased. The Mask of Time was very well per- formed by the BBC Symphony Orchestra, RBC Singers and Symphony Chorus. One or two of the other Proms to date, played by that orchestra, have been noticeably uelow par. It is never quite certain what causes these fluctuations in standard. Such things are traditionally blamed on the system of deputies by which the busiest players in an orchestra can get out of the Lesser events. This must be disruptive, but a good conductor should be able to pro- duce something acceptable in performance With these nonetheless highly experienced players. Marek Janowski, on 26 July, simply could not keep the orchestra together, and with unanimity of ensemble

Went other elementary aspects of tech- nique. From the orchestral point of view

rrokofiev's Third Piano Concerto was uncomfortable, though Peter Donohoe Played the solo part unexceptionably, which is saying something.