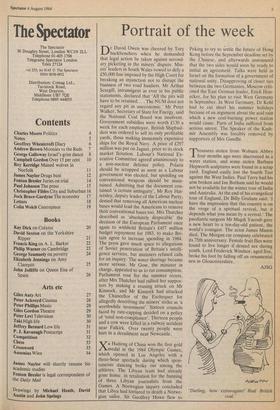 Dr David Owen was cheered by Tory backbenchers when he demanded that legal action be taken against second- ary picketing in the miners' dispute. Min- ers' leaders in South Wales vowed to defy a £50,000 fine imposed by the High Court for breaking an injunction not to disrupt the business of two road hauliers. Mr Arthur Scargill, intransigent as ever in his public statements, declared that 'All the pits will have to be retained... . The NUM does not regard any pit as uneconomic.' Mr Peter Walker, Secretary of State for Energy, said the National Coal Board was insolvent. Government subsidies were worth £130 a week for each employee. British Shipbuil- ders was ordered to sell its only profitable yards, those making immensely expensive ships for the Royal Navy. A price of £297 million was put on Jaguar, prior to its stock market flotation. Labour's National Ex- ecutive Committee agreed unanimously to a non-nuclear defence policy. Polaris should be scrapped as soon as a Labour government was elected, but spending on conventional weapons should be main- tained. Admitting that the document con- tained 'a certain ambiguity', Mr Roy Hat- tersley, deputy leader of the Labour Party, denied that removing all American nuclear bases would lead the Americans to remove their conventional bases too. Mrs Thatcher described as 'absolutely despicable' the decision of the European Parliament once again to withhold Britain's £457 million budget repayment for 1983, to make Bri- tain agree to increase, spending in 1984. The press gave much space to allegations of Soviet penetration of Britain's intelli- gence services, but ministers refused calls for an inquiry. The water shortage became more serious. Mr Gow, the minister in charge, appealed to us to cut consumption. Parliament rose for the summer recess, after Mrs Thatcher had rallied her suppor- ters by making a rousing attack on Mr Kinnock, and Mr Kinnock had attacked the Chancellor of the Exchequer for allegedly describing the miners' strike as 'a worthwhile investment'. Sixteen councils faced by rate-capping decided on a policy of 'total non-compliance'. Thirteen people and a cow were killed in a railway accident near Falkirk. Over twenty people were hurt in a derailment near Newcastle.

Nru Haifeng of China won the first gold ilmedal in the 1984 Olympic Games, which opened in Los Angeles with a three-hour spectacle during which spon- taneous dancing broke out among the athletes. The Libyan team had already gone home, in retaliation for the banning of three Libyan journalists from the Games. A Norwegian inquiry concluded that Libya had tortured to death a Noiwe- gian sailor. Sir Geoffrey Howe flew to Peking to try to settle the future of Hong Kong before the September deadline set by the Chinese, and afterwards announced that the two sides would soon be ready to initial an agreement. Talks were held in Israel on the formation of a government of national unity. Disapproving of closer ties between the two Germanies, Moscow criti- cised the East German leader, Erich Hon- ecker, for his plan to visit West Germany in September. In West Germany, Dr Kohl had to cut short his summer holidays because of an argument about the acid rain which a new coal-burning power station would cause. Parts of India suffered from serious unrest. The Speaker of the Kash- mir Assembly was forcibly removed by supporters of Mrs Gandhi.

Treasures stolen from Woburn Abbey four months ago were discovered in a water station, and some stolen Barbara Hepworth sculptures were found in a scrap yard. England easily lost the fourth Test against the West Indies. Paul Terry had his arm broken and Ian Botham said he would not be available for the winter tour of India and Australia. At the end of his evangelical tour of England, Dr Billy Graham said: 'I have the impression that this country is on the verge of a spiritual revival, but it depends what you mean by a revival.' The paediatric surgeon Mr Magdi Yacoub gave a new heart to a ten-day-old patient, the world's youngest. The actor James Mason died. The Morgan car company celebrated its 75th anniversary. Female fruit flies were found to live longer if denied sex during youth. Lord Frederick Windsor, aged five, broke his foot by falling off an ornamental urn in Gloucestershire.