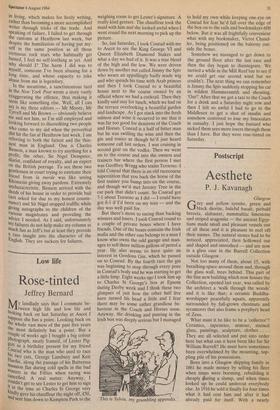 My landlady says that I commute be- tween high life and low life and looking back on last Saturday at Ascot I suppose she has a point. Looking back on the whole vast mess of the past five years She most definitely has a point. But a couple of weeks ago I bought a big colour Photograph, nicely framed, of Lester Pig- gott as a birthday present for my friend Conrad who is the man who used to race his two cats, George Lansbury and Keir Hardie, along the passage of his Battersea mansion flat during cold spells in the bad winters in the Fifties when racing was cancelled. A real nutter. Anyway, I Dataet to se Lester to get him to sn het time soe Charles St George very kindly gave his chauffeur the night off, £50, and sent him down to Kempton Park to the

weighing room to get Lester's signature. A really kind gesture. The chauffeur took the maid with him and she looked awful when I went round the next morning to pick up the picture.

So, last Saturday, I took Conrad with me to Ascot to see the King George VI and Queen Elizabeth Diamond Stakes and what a day we had of it. It was a true blend of the high and the low. We were driven down by another nut called Jimmy the Spiv who wears an appallingly badly made wig and who spends his time with Arab princes and then I took Conrad to a beautiful house next to the course owned by an official where we had a cocktail. Then they kindly said stay for lunch, which we had on the terrace overlooking a beautiful garden and landscape. As I got stuck into the fresh salmon and wine it occurred to me that it was far too good for denizens of the Coach and Horses. Conrad is a half of bitter man but he was swilling the wine and then the gin and tonics as though he'd just heard someone call last orders. I was cruising in second gear on the vodka. Then we went on to the course and into the owners and trainers bar where the first person I met was Geoffrey Wragg who trains Teenoso. I told Conrad that there is an old racecourse superstition that you back the horse of the first trainer you bump into on the course, and though we'd met Jeremy Tree in the car park that didn't count. So Conrad got 7-1 about Teenoso as I did — I could have got 8-1 if I'd been on my toes — and the day was well paid for.

But there's more to racing than backing winners and losers. I took Conrad round to a couple of private boxes where I have friends. One of the boxes contains the Irish mafia and the other one belongs to a man I know who owns the odd garage and man- ages to sell three million gallons of petrol a year. He also seems to have quite an interest in Gordons Gin, which he passed on to Conrad. By the fourth race the gin was beginning to seep through every pore in Conrad's body and he was starting to get a little limp. Eight weeks ago I took him up to Charles St George's box at Epsom during Derby week and I think these two glimpses of just how the other half live have turned his head a little and I fear there may be some rather grandiose be- haviour in the Coach and Horses soon. Anyway, the drinking and punting in the Irish box was deeply serious but I managed This is Sylvia, my grumbling appendix.' to hold my own while keeping one eye on Conrad for fear he'd fall over the edge of the box on to the rails and bookmakers 60ft below. But it was all frightfully convenient what with my bookmaker, Victor Chand- ler, being positioned on the balcony out- side the boxes.

Somehow we managed to get down to the ground floor after the last race and then the day began to disintegrate. We tarried a while in the Mill Reef bar to see if we could get our second wind but we couldn't. The next thing we can remember is Jimmy the Spiv suddenly stopping his car in wildest Hammersmith and shouting, `Out!' After that we got a taxi to the Coach for a drink and a Saturday night row and then I felt so awful I had to go to the Middlesex to get a shot of insulin and somehow contrived to lose my binoculars in casualty. I just hope the bastard who nicked them sees more losers through them than I have. But they were rose-tinted on Saturday.