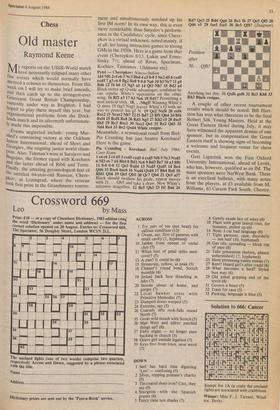 My reports on the USSR-World match have necessarily eclipsed many other fine events which would normally have merited a column to themselves. From this week on I will try to make brief amends, and then catch up to the strongest-ever Grieveson Grant British Championship, currently under way in Brighton. I had hoped to play there myself this year, but organisational problems from the Dock- lands match and its aftermath unfortunate- ly made this impossible.

Events neglected include: young Mur- shed's convincing victory at the Oakham Junior International, ahead of Short and Georgiev, the reigning junior world cham- pion. Also, Timman's wins at Sarajevo and Bugojno, the former equal with Korchnoi and the latter ahead of Ribli and Torre. Finally, the amazing gerontological feat of the untitled 64-year-old Russian, Chere- Pkov, at Leningrad, where the veteran took first prize in the Grandmaster tourna-

merit and simultaneously notched up his first IM norm! In its own way, this is even more remarkable than Smyslov's perform- ance in the Candidates' cycle, since Chere- pkov is a virtual unknown, noted mainly, if at all, for losing instructive games to strong GMs in the 1950s. Here is a game from that event (Cherepkov 8/13, Lukin and Ermo- linsky 71/2, ahead of Rivas, Speelman, Kochiev, Taimanov, Uhlmann etc).

Meanwhile, a sensational result from Biel: Pia Cramling has just beaten Korchnoi! Here is the game.

A couple of other recent tournament results which should be noted: Bill Hart- ston has won what threatens to be the final Robert Silk Young Masters. Held at the Great Eastern Hotel during July, it may have witnessed the apparent demise of one sponsor, but in compensation the Great Eastern itself is showing signs of becoming a welcome and frequent venue for chess events.

Gert Ligterink won the First Oxford University International, ahead of Levitt, who has, however, qualified as an IM. The main sponsors were NatWest Bank. There is an excellent bulletin, with many notes from the players, at £3 available from M. Williams, 63 Curzon Park South, Chester.