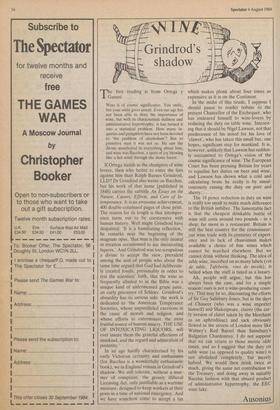 The first reading is from Ortega y Gasset:

If Ortega stands as the champion of wine lovers, then who better to enter the lists against him than Ralph Barnes Grindrod, LLD? Dr Grindrod also wrote on Bacchus, but his work of that name (published in 1848) carries the subtitle An Essay on the Nature, Causes, Effects, and Cure of In- temperance. It is an awesome achievement, 400 double-columned pages of close print. The reason for its length is that intemper- ance turns out to be coextensive with human history. Well might Grindrod have despaired: 'It is a humiliating reflection,' he remarks near the beginning of the magnum opus, 'that man is the only animal in creation accustomed to use intoxicating liquors.' And Grindrod was too scrupulous a divine to accept the view, prevalent among the sort of people who about the same time argued that God had deliberate- ly created fossils, presumably in order to test the scientists' faith, that the wine so frequently alluded to in the Bible was a unique kind of unfermented grape juice, an early precursor of Schloer. Grindrod's absurdity has its serious side: the work is dedicated to 'the American Temperance Societies, whose unparalleled exertions in the cause of morals and religion, and whose efforts to exterminate the most fruitful source of human misery, THE USE OF INTOXICATING LIQUORS, will ever insure them the grateful affections of mankind, and the regard and admiratiOn of posterity.'

In an age hardly characterised by his early Victorian certainty and enthusiams (for Bacchus is a wonderfully enthusiastic book), we in England remain in Grindrod's shadow. We still tolerate, without a mur- mer of complaint, the grossly illiberal Licensing Act, only justifiable as a wartime measure, designed to keep workers at their posts in a time of national emergency. And we have somehow come to accept a tax which makes plonk about four times as expensive as it is on the Continent.

In the midst of this tirade, I suppose I should pause to render tribute to the present Chancellor of the Exchequer, who has endeared himself to wine-lovers by reducing the duty on table wine. Interest- ing that it should be Nigel Lawson, not that predecessor of his noted for his love of 'clawet', who has taken this small but, one hopes, significant step for mankind. It is, however, unlikely that Lawson has sudden- ly succumbed to Ortega's vision of the cosmic significance of wine. The European Court has been pressing Britain for years to equalise her duties on beer and wine, and Lawson has shown what a cold and calculating brute he really is by simul- taneously raising the duty on port and sherry.

The 18 pence reduction in duty on wine is really too small to make much difference to the British imbiber. The lamentable fact is that the cheapest drinkable bottle of wine still costs around two pounds — in a shop; far more in a restaurant. Britain is still the best country for the connoisseur: our wine trade with its centuries of experi- ence and its lack of chauvinism makes available a choice of fine wines which cannot be matched elsewhere. But we cannot drink without thinking. The idea of table wine, inscribed on so many labels (yin de table, Tafelwein, vino de tavola), is belied when the stuff is taxed as a luxury.

Ah, people will argue, but this has always been the case, and for a simple reason: ours is not a wine-producing coun- try. That may be so, discounting the efforts of Sir Guy Salisbury-Jones, but in the days of Chaucer (who was a wine importer himself) and Shakespeare, clairee (the ear- ly version of claret taken by the Merchant as an aphrodisiac) and sack obviously flowed in the streets of London more like Watney's Red Barrel than Sainsbury's Bulgarian Chardonnay. I do not suppose that we can return to those merrie olde times, and so I suggest that the duty on table wine (as opposed to quality wine) is not abolished completely, but merely halved. We would then drink twice as much, giving the same net contribution to the Treasury, and doing away in suitably Bacchic fashion with that absurd product of administrative hypertrophy, the EEC wine lake.