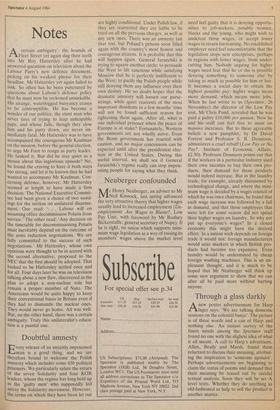 Mr Henry Neuberger, an adviser to Mr Neil Kinnock, last spring advanced the very attractive theory that higher wages usually lead to increased employment (Un- employment: Are Wages to Blame?, Low Pay Unit, with foreword by Mr Rodney Bickerstaffe, general secretary of Nupe). If he is right, no union which supports mini- mum wage legislation as a way of raising its members' wages above the market level

need feel guilty that it is denying opportu- nities to job-seekers, notably women, blacks and the young, who might wish to undercut those wages, or accept lower wages in return fop training. No established employer need feel uncomfortable that the legislation stops new enterprises, perhaps in regions with lower wages, from under- cutting him. Nobody arguing for higher wages need fear that he or she is possible denying something to someone else by taking as much as possible for him or her. It becomes a social duty to obtain the highest possible pay: higher wages mean more demand, which means more jobs. When he last wrote to us (Spectator, 26 November) the director of the Low Pay unit, Mr 'Chris Pond, revealed that he was paid a paltry £10,000 per annum. Now he and his staff can feel free to insist on massive increases. But to these agreeable beliefs a new pamphlet, by Dr David Forrest and Professor S. R. Dennison, administers a cruel rebuff (Low Pay or No Pay?, Institute of Economic Affairs, £2.50). Professor Dennison points out that if the workers in a particular industry used their own incomes to buy their own pro- ducts, then demand for those products would indeed increase. But in the laundry trade, for example, already threatened by technological change, and where the mini- mum wage is decided by a wages council of which he was once chairman, he found that each wage increase was followed by a fall in demand, and that those employees that were left for some reason did not spend their higher wages on laundry. So why not put up everyone's wages? In a closed economy this might have the desired effect. In a nation wich depends on foreign trade it would not: foreign manufacturers would seize markets in which British pro- ducts had become too expensive. Even laundry would be undermined by cheap foreign washing machines. This is an un- pleasant thought, and it is much to be hoped that Mr Neuberger will think up some new argument to show that we can after all be paid more without hurting anyone.